Back in November 2013, I searched the Donggang area for interesting sounds. I found a little park after dark and went out on to the beach. After climbing over some concrete “wave breakers/things that keep enemy landing parties at bay” I found something interesting to record…

There were a lot of fishing boats out there, mostly sitting in one place. It didn’t seem like they were fishing…just kind of hanging out. Occasionally some would move about though.

Not a whole lot to say about it; their chugging diesel engines sounded pretty cool to me. Thought I’d share. I’ve got a little video I’ll post if I can find it. Here’s the only other grainy shot I took that night. 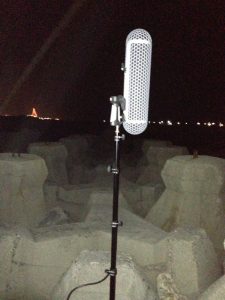