MengDanShan North Peak – 虻彈山北峰 is located behind the Wan’an Riverside park 萬安親水公園. It’s a hike that you should not attempt. For real, I’m not kidding. There is no reason for you to hike this at all. However, if you’d like to learn about my pain to reach this peak–or for some reason actually want to try hiking it–please read on.

I found out about MengDanShan North Peak while looking through one of the apps on my phone. It’s next to the Wan’an Riverside park, which I thought was great because I could hang out by a nice spot further upstream when I finished the hike. I had wanted to do an easy peak, and at 439 meters it looked to be a perfect choice. I found a GPX track and a write-up about it here: 登虻彈山北峰  It was almost three years old, which meant I couldn’t trust the info it provided. But hey, it was only three kilometers to the top…it couldn’t be that bad, right? hahaha…

I had also found a couple other small peaks in the area that seemed really easy to get to. My plan was to reach MengDanShan first and then try for one or both of the other peaks, followed by a short stay by the river. As it worked out, I barely made it back to my bike before dark trying to reach the first peak. Here’s how the hike went…

There’s a decent size trail that starts behind the riverside park. It’s in good shape until you reach a farm. Beyond that it narrows to single track. 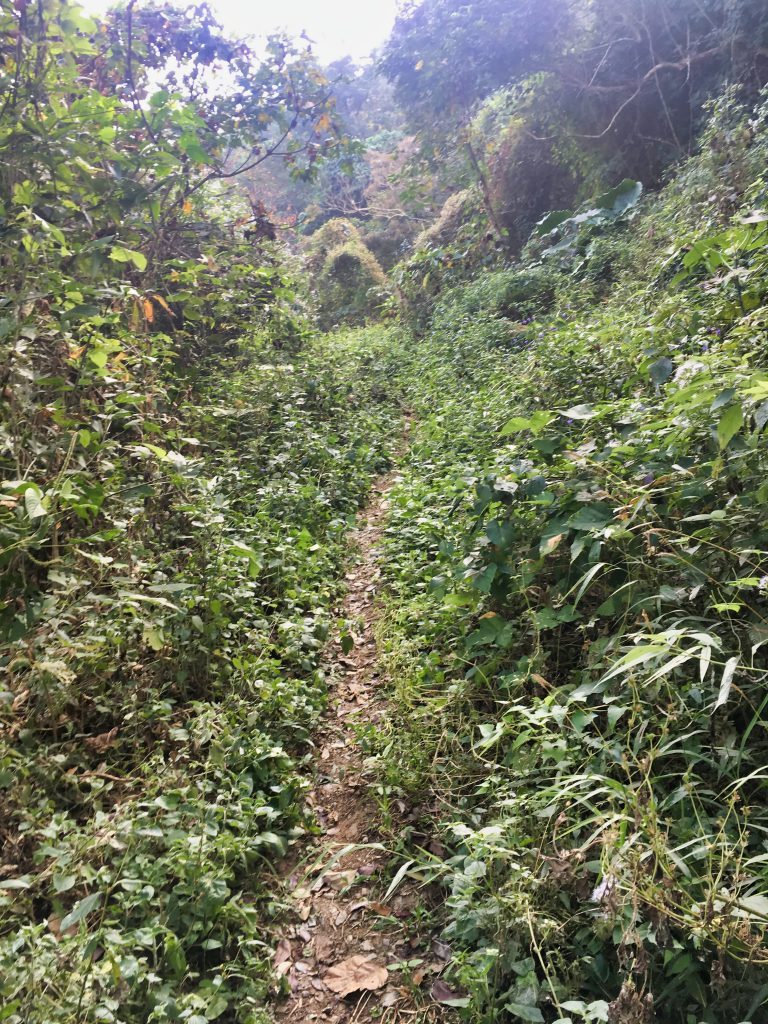 I drove a ways and was greeted with some decent views. 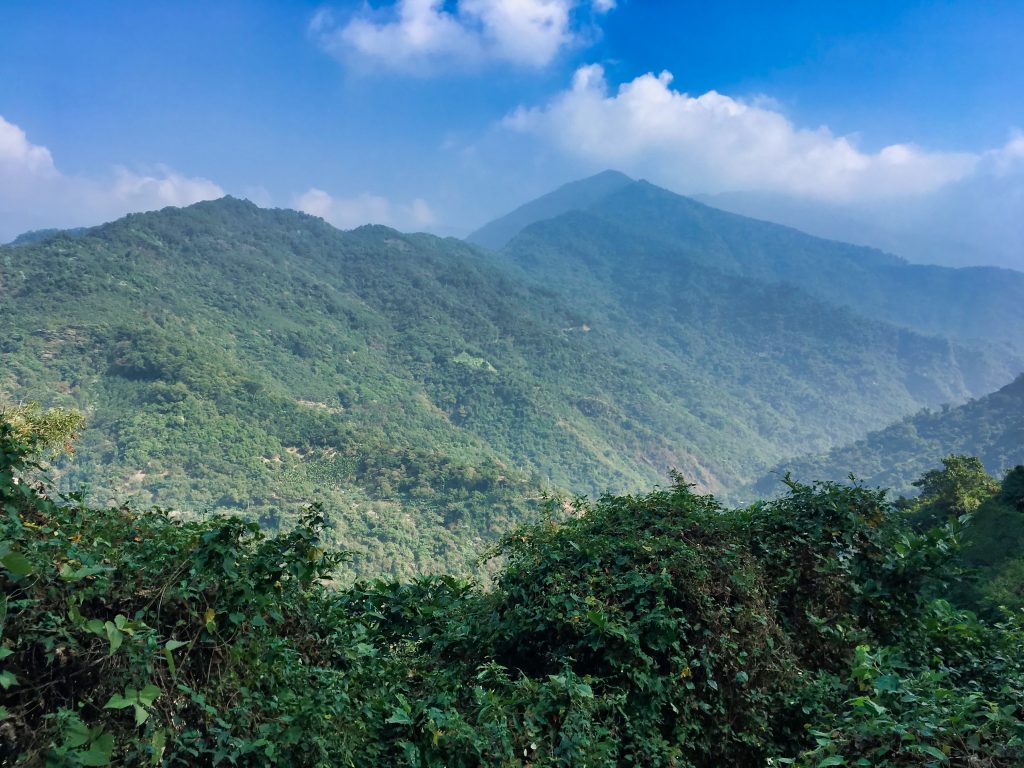 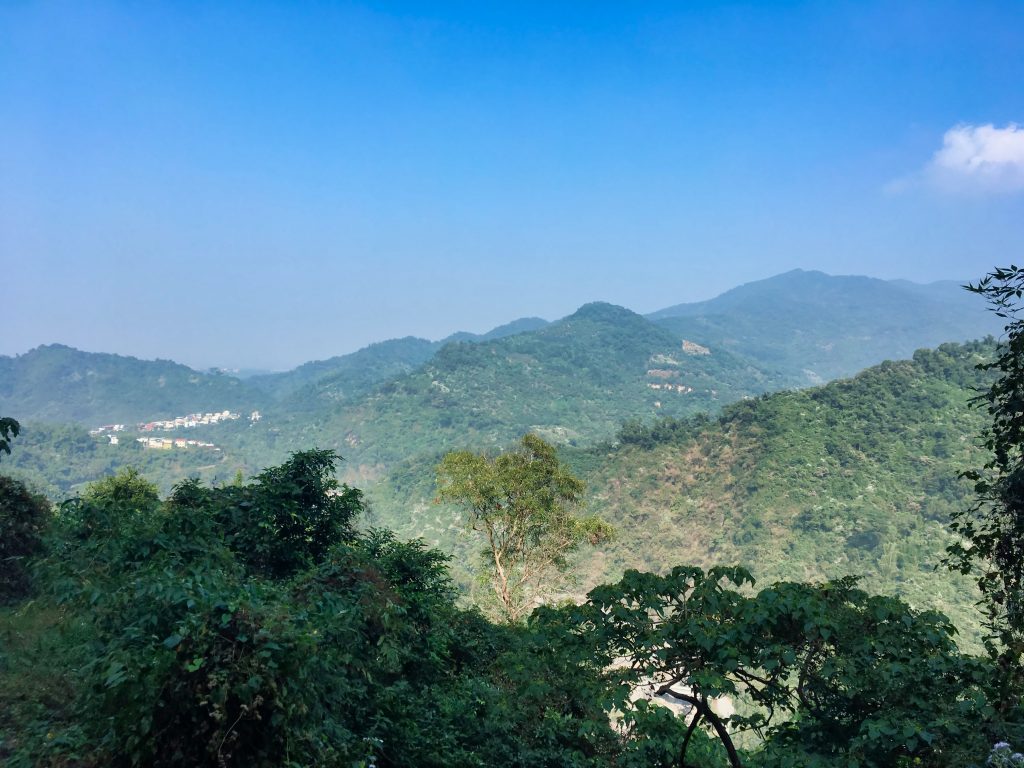 I could have driven further up, but I thought if I continued any any more I wouldn’t have much to hike. Silly me.

Near where I parked I found these. 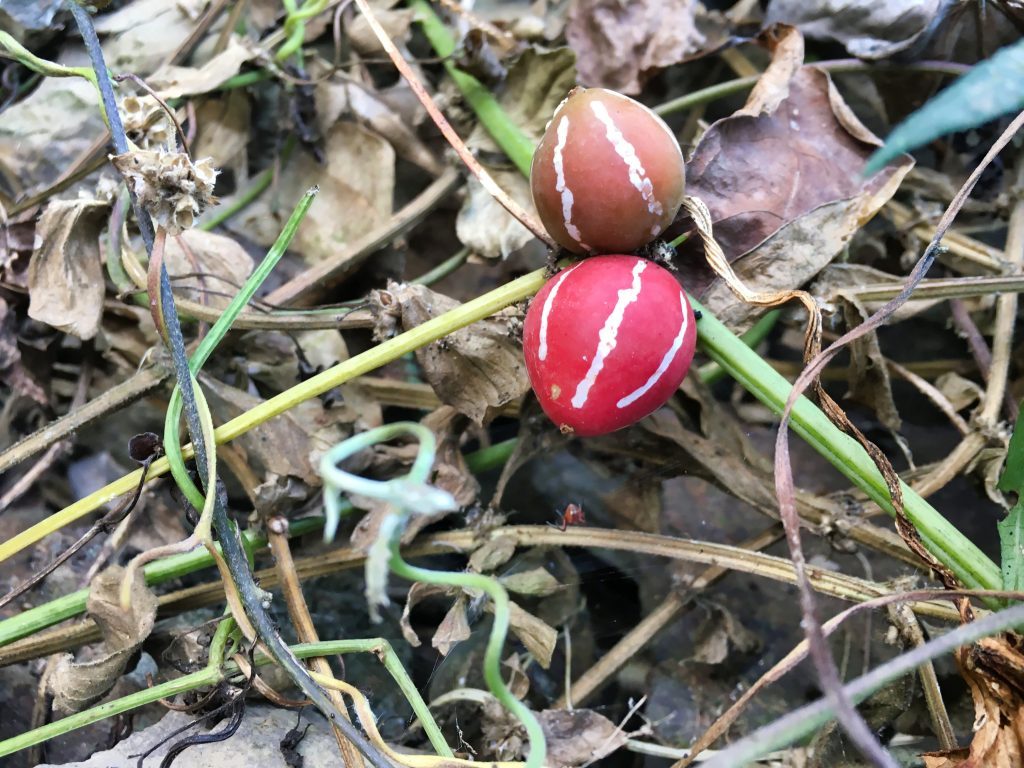 They’re known as 雙輪瓜 in Chinese, which literally translates to “Double Round Melon”.  From what I found in English, they’re Diplocyclos palmatus, or commonly called native bryony or striped cucumber. Apparently every part of the plant is poisonous. However, the leaves are eaten in small quantities in some countries. I think I’ll leave them alone.

My hike started out nice and easy. In one spot there was a perfect view of the riverside park. 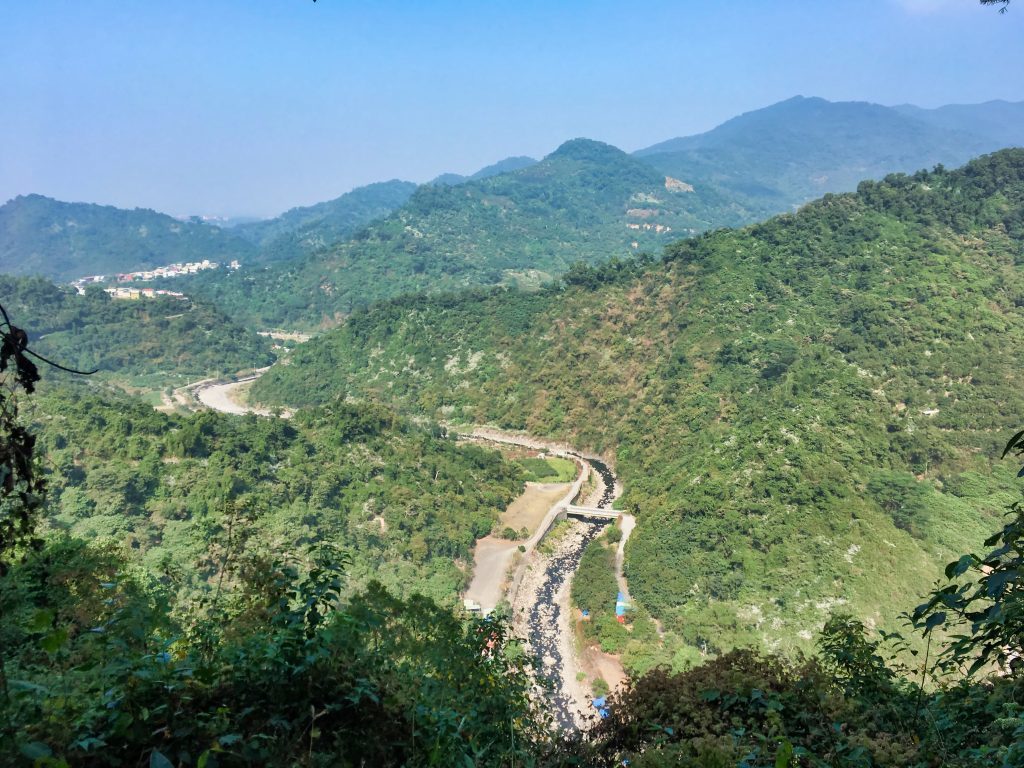 This would be the last good view I had all day.

As I rounded a corner I came face to face with this wall of foliage. 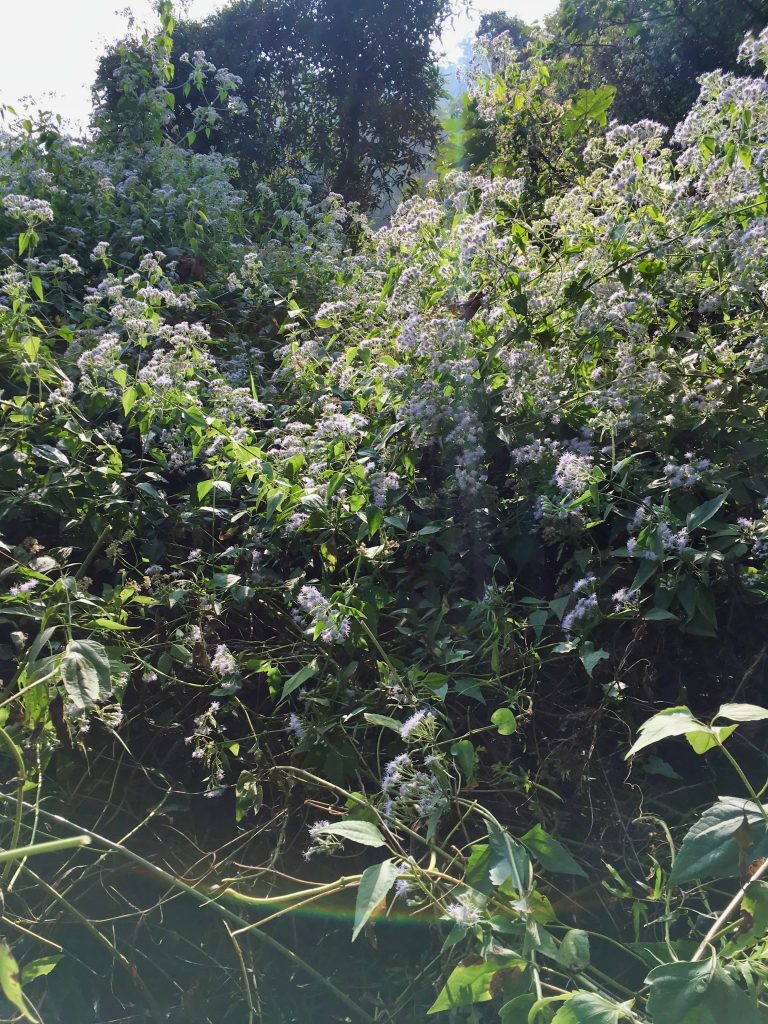 From experience, these dense patches of foliage don’t go for so far. So I started my machete work. With every chop this thick puff of flower pollen came raining down. I’m not allergic to pollen, but I was still glad I took my allergy medicine that morning. As expected it didn’t last long. But I ran into a few more patches of it over the next couple hundred meters.

I finally came under some tree cover–which this stuff doesn’t grow under–and made it to a dry steam bed. I should have hiked up the stream bed, but instead mistakenly hiked up through the trees. The stream would have been quicker, but the trees weren’t so bad. 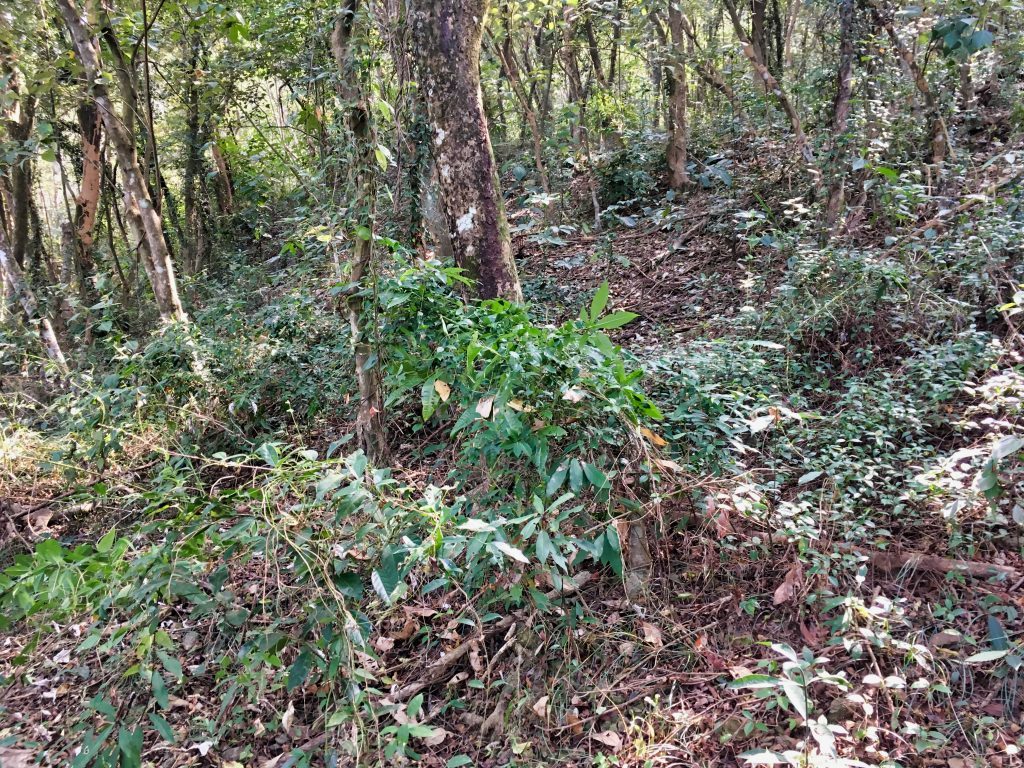 When I got back onto the trail I got my first look at how difficult it was going to be. 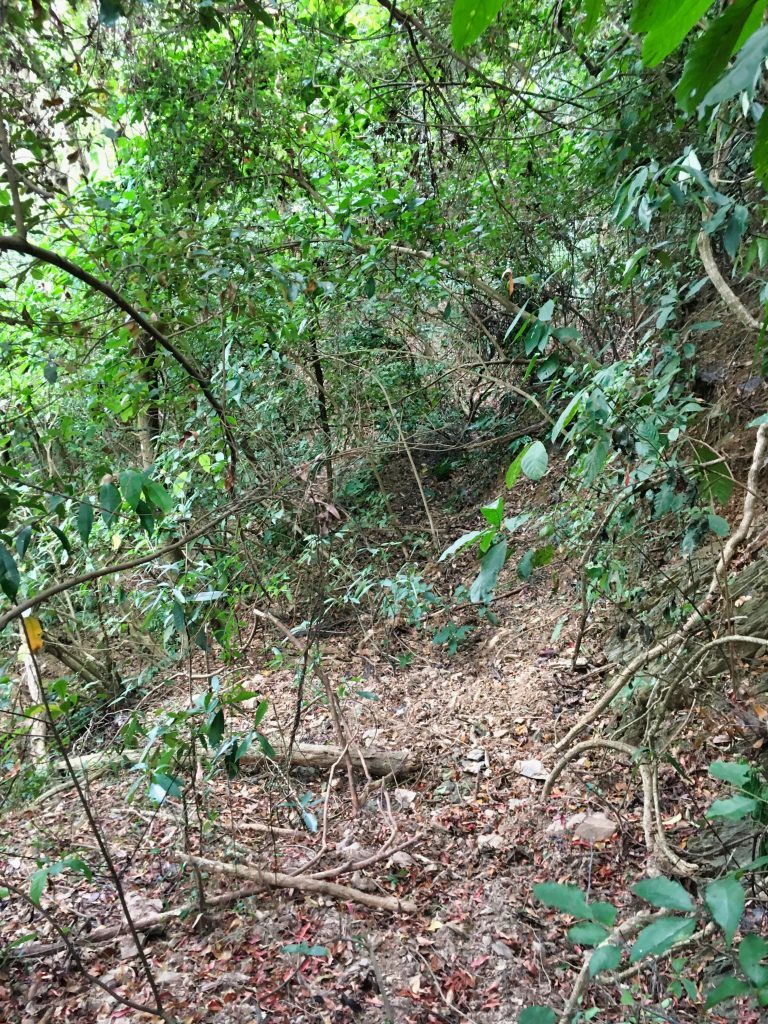 This may not look like much. But let me tell you…IT WAS!

What you can kind of see in the picture are some vines. They’re not terrible here, but all throughout the hike after this point are nothing but large vines, medium vines and small vines. They grabbed onto everything. They tripped me up, made me stumble, prevented me from moving forward, and sometimes put me on my ass. I fought with them over the next three hours to get to the peak, and for another two hours getting down. They were awful is all I can say.

One thing I quickly realized is that there used to be a network of farming roads up here. There appeared to be a lot. This is what most of them looked like. 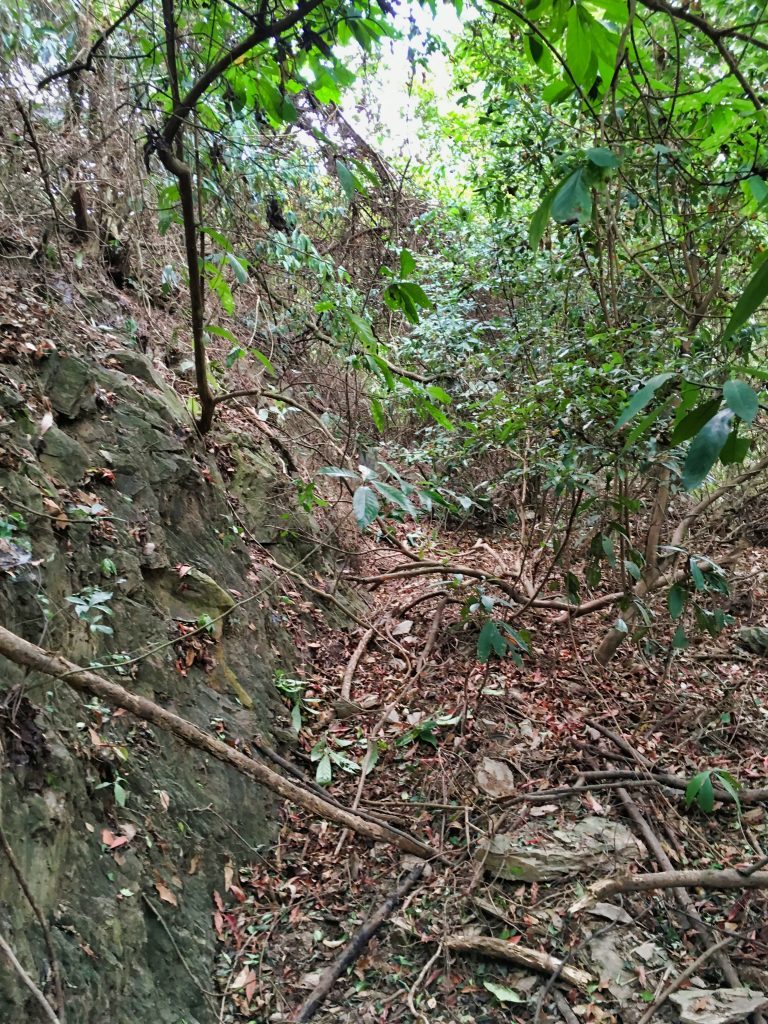 They were so closely spaced together, instead of following them switchback after switchback, I cut up to the next one several times. It saved me a lot of time. And I needed it. A hike that I thought would take me and hour and a half took four hours and fifteen minutes. All that time to hike less than three kilometers.

As I neared the peak I FINALLY found my first marker ribbon…on the ground. 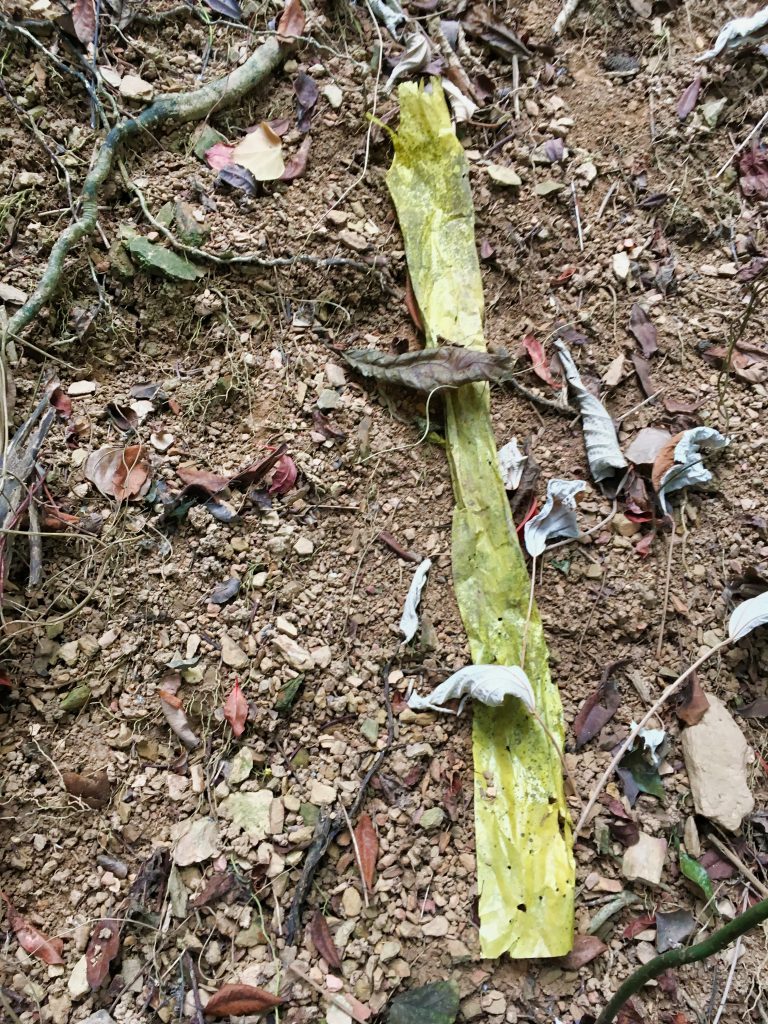 If you were there with me you would have heard me cursing often about there not being any ribbons. And then to find one maybe 100 meters from the peak…well, it didn’t make things better.

The hike was already bad, but when I got this close to the peak it got worse. Things got much more vertical…and much, MUCH more overgrown. 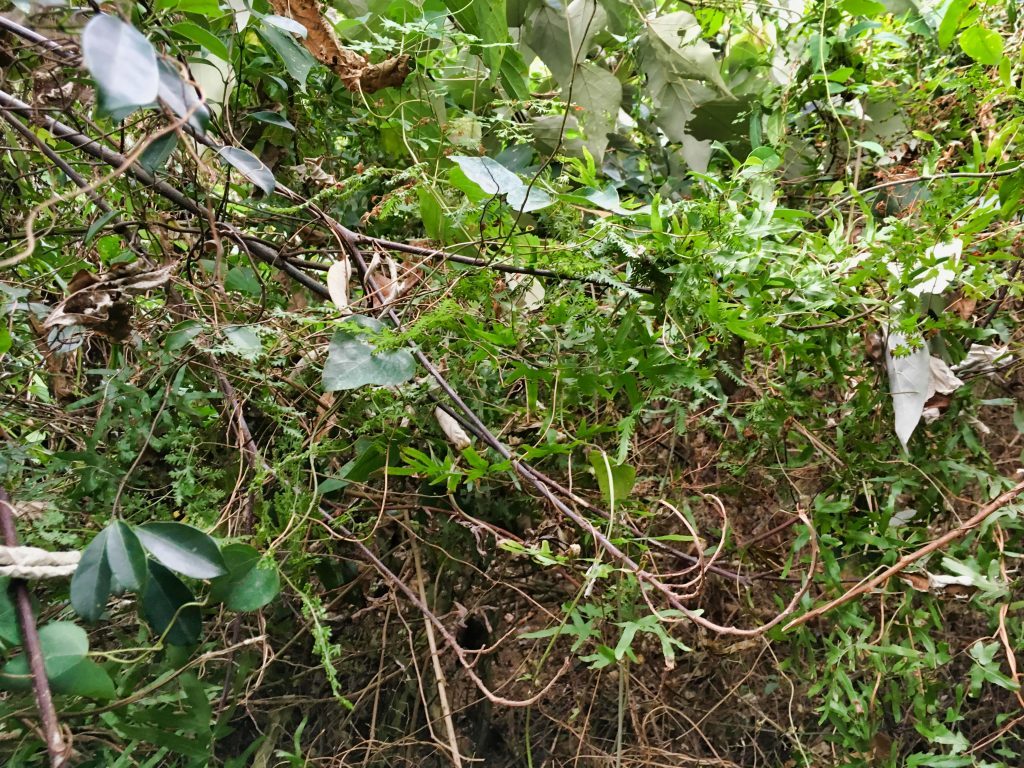 I had to climb up and hack through this at the same time. It went for maybe thirty meters before finally opening up to the top.

This is part of what I hacked through. 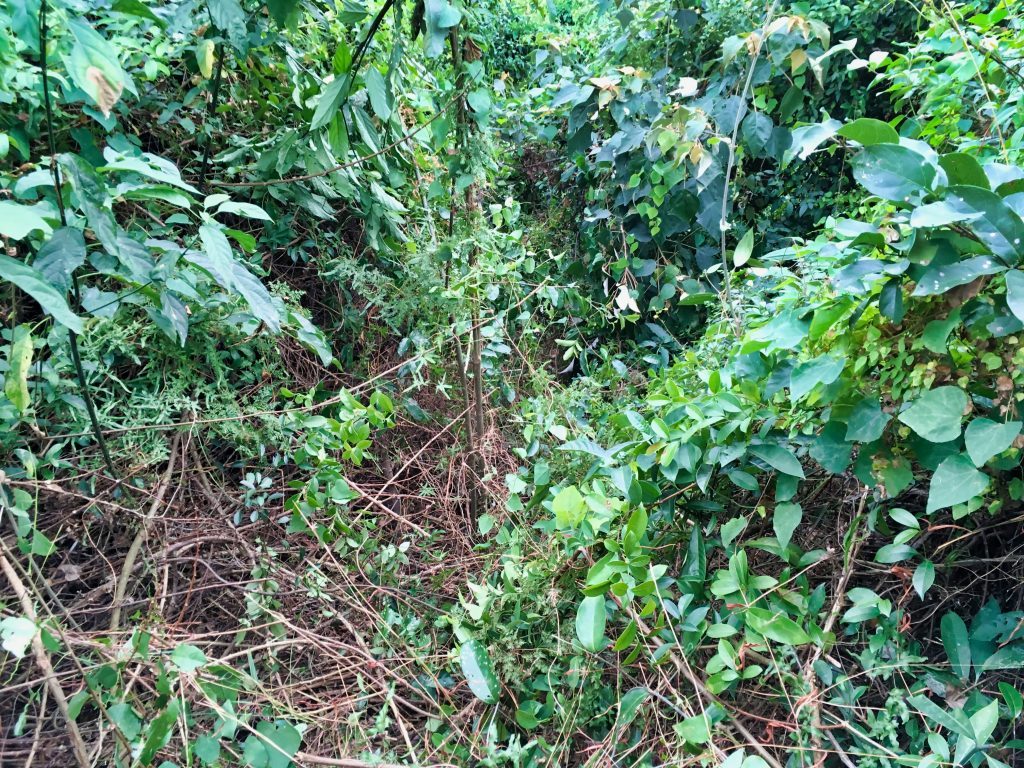 When I got to the top (not the peak, but pretty close) I got a small, sorta view. 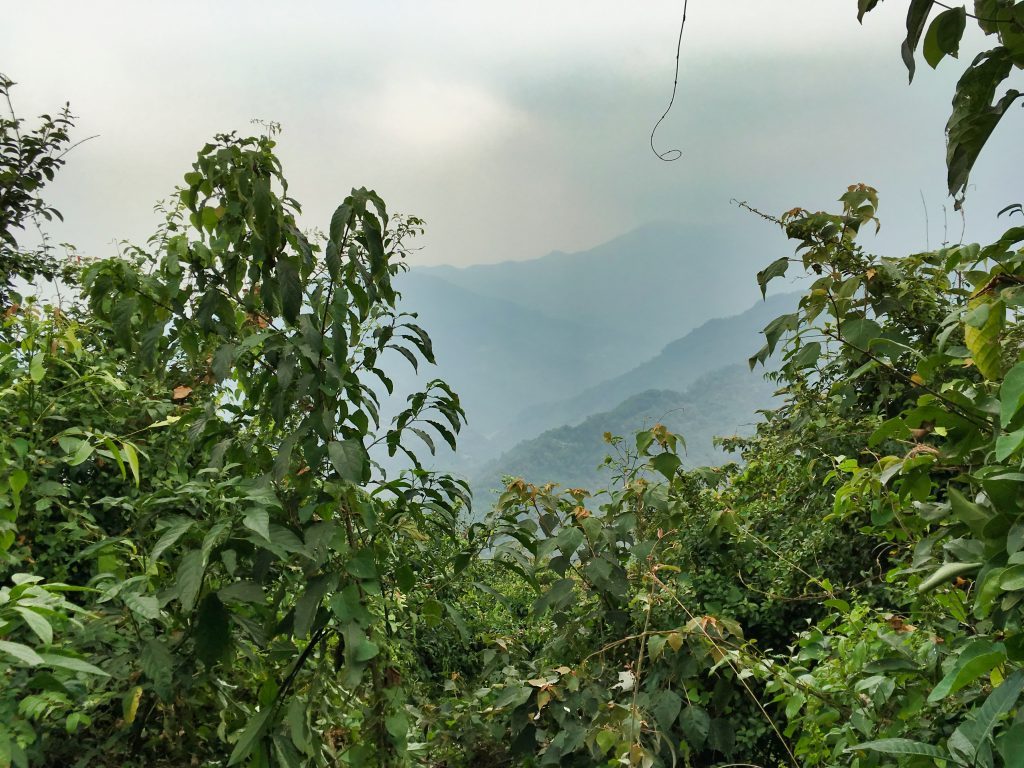 It didn’t really improve my mood.

From here it didn’t take long to get to the peak. I honestly wasn’t expecting much, and I didn’t get much. It certainly appeared that nobody had been there for quite some time. There was a triangulation point, but that was it. 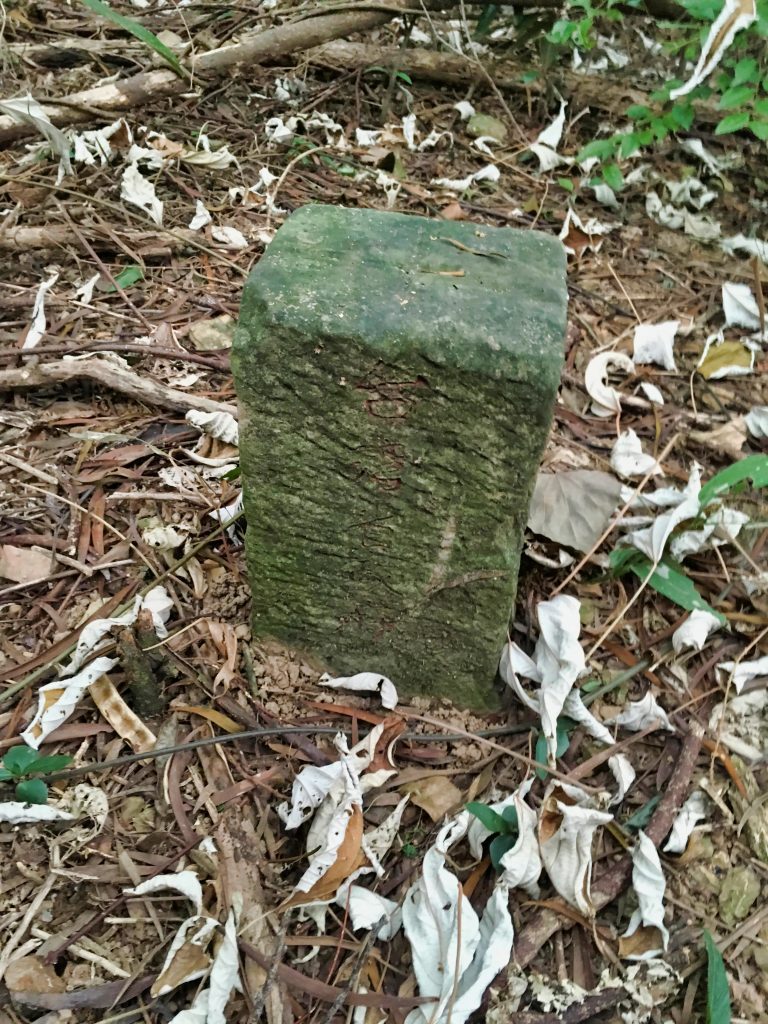 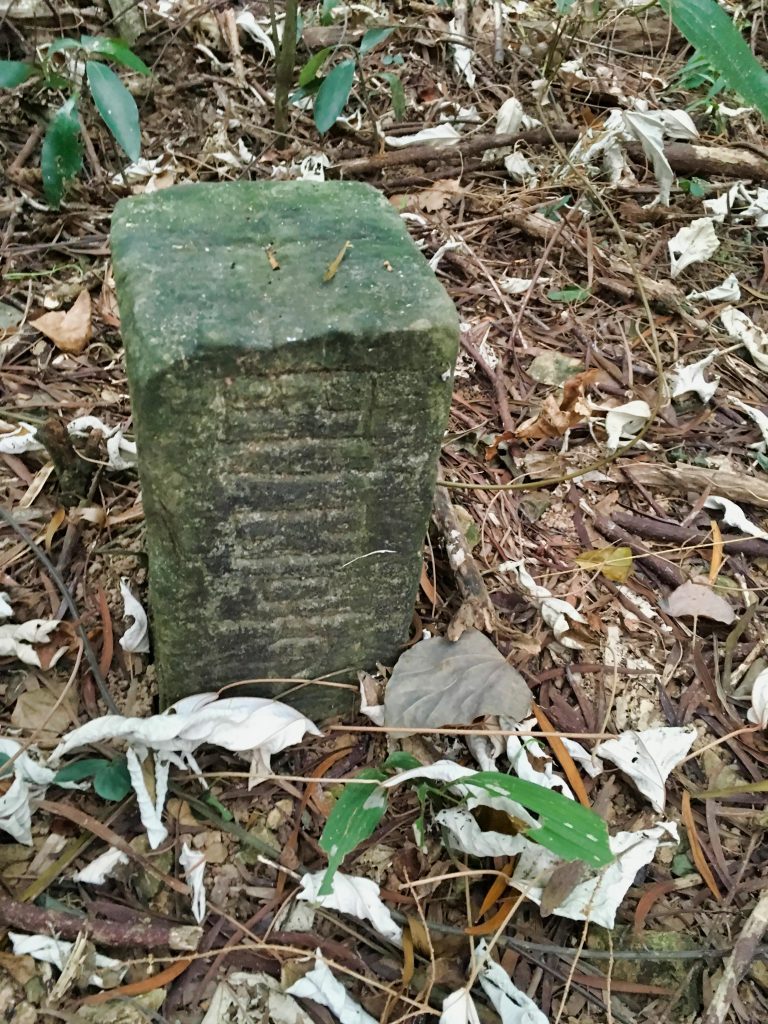 There was no sign to hold. So here’s my sign-less peak picture. 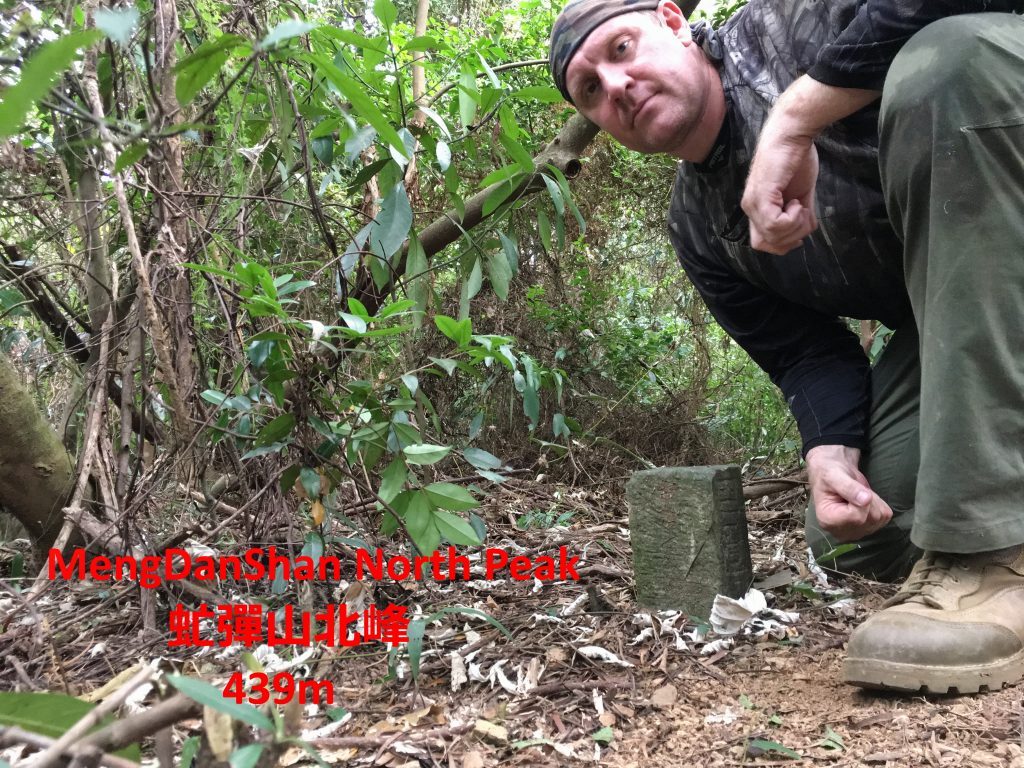 One thing that made me angry at the time was finding several marker ribbons at the top near the triangulation point. I was thinking, “Really!? They couldn’t hang them on the way up, but saved them for the VERY friggen top!?!?” I had taken a couple wrong turns on the way up and could have used some guidance. Now having thought about it with a clear head, I suppose they could have disappeared over the years. That or the trail was in good shape and didn’t need ribbons until towards the top. I’ll give them the benefit of the doubt here.

I recorded a little video of myself being angry. Guess I’ll share it here. Enjoy 🙂

I wasn’t too happy, was I? Hahaha…most of that was just joking around. I don’t intend to find anyone and say anything bad to them.

You would think the hike back down wouldn’t be so bad, right? I mean, I had already cut through all those vines and created a path more or less. Well, it wasn’t. It was quicker, yes. But the vines were still a problem. And sometimes they were even worse. Why? Well, try sliding down a decline with vines grabbing all parts of your body. They would hold you firm. Then after you cut them…you would suddenly start sliding down, somewhat or completely out of control. Ugh…

I took another couple wrong turns and wished I had brought some marker ribbons with me to follow back. But all in all getting back was boring. The only thing I found interesting was this plastic bottle hung to a tree. 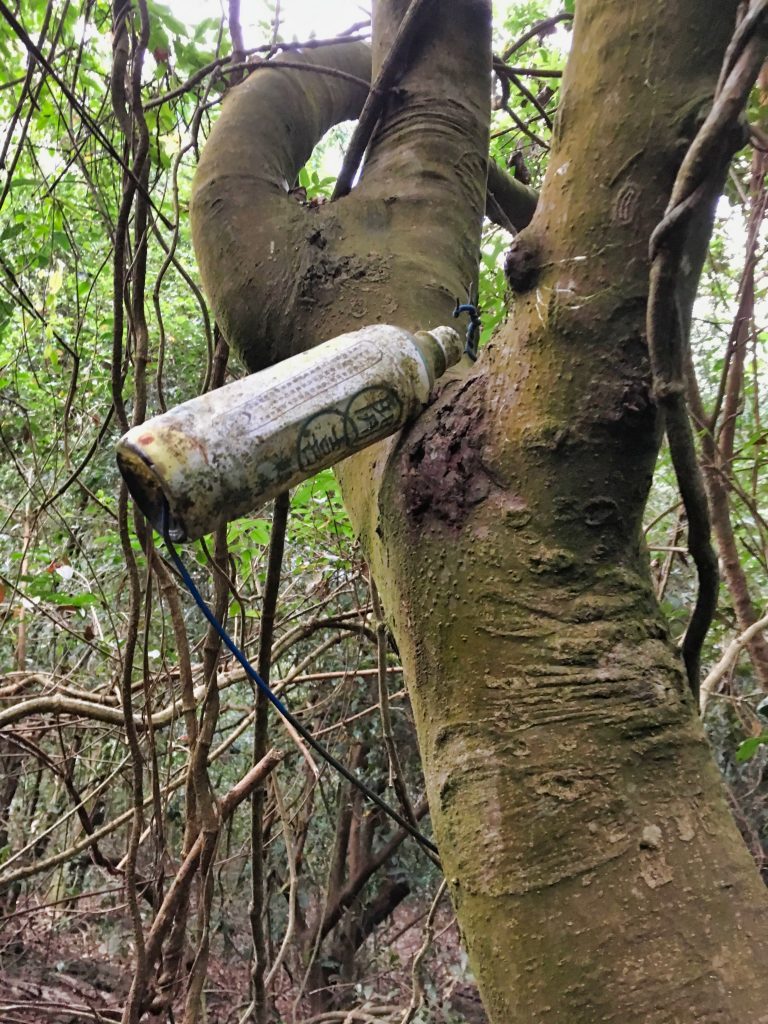 I thought maybe it was a trap marker, but I couldn’t find anything. Who knows what the original purpose was.

And that’s it. I didn’t even have time to eat lunch on the hike. I hauled all that cooking equipment (and a camp chair!!!) thinking it would be a nice and easy hike and I could sit there and enjoy myself at the top…for nothing.

I hope you enjoyed my pain. haha… And if you are actually considering to hike this, then please send me a message. I would like to meet you and hike with you someday.

(When you get to the dry stream bed, go up it. Don’t follow my track at that point. It will save you time.)

OutRecording @OutRecording
7
TFW you spot the first sign that you've arrived at the abandoned village you were attempting to reach. In this case, Tjakuvukuvulj in Shihzih, Pingtung. It covered a somewhat large area and was in decent shape. Post in the works. #OutHiking #hiking #taiwan https://t.co/ww7WLdT7aC 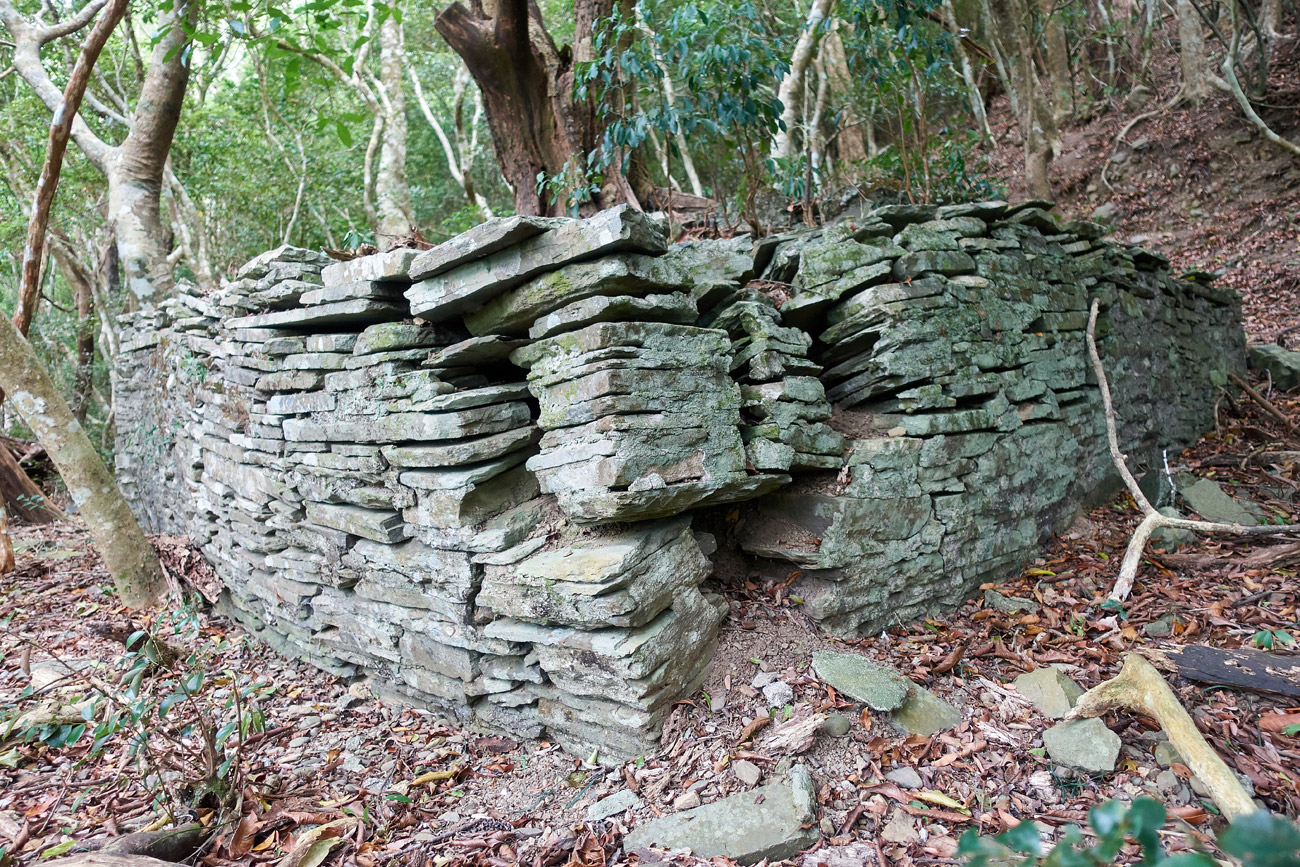