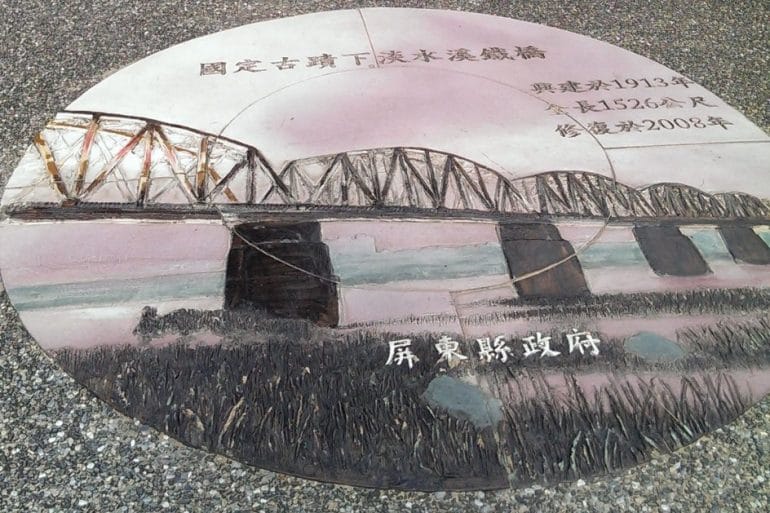 I went out a few days ago with no particular place in mind to record. I’ve had mixed luck recording at this park not so far from my house, just off to the side of the Gaoping bridge. The official name is Gāopíngxī Riverside Park 高屏溪河濱公園.

The park is butted up against the side of a river, so there’s lots of potential sounds to record. In addition to wildlife, I’ve seen a lot of kite flyers and RC Airplanes on the weekend; I’ll probably go back for those one day.

On this trip I thought to record a smaller section of the river. I think it’s actually a smaller river that feeds the main river.

This is from later in the day… 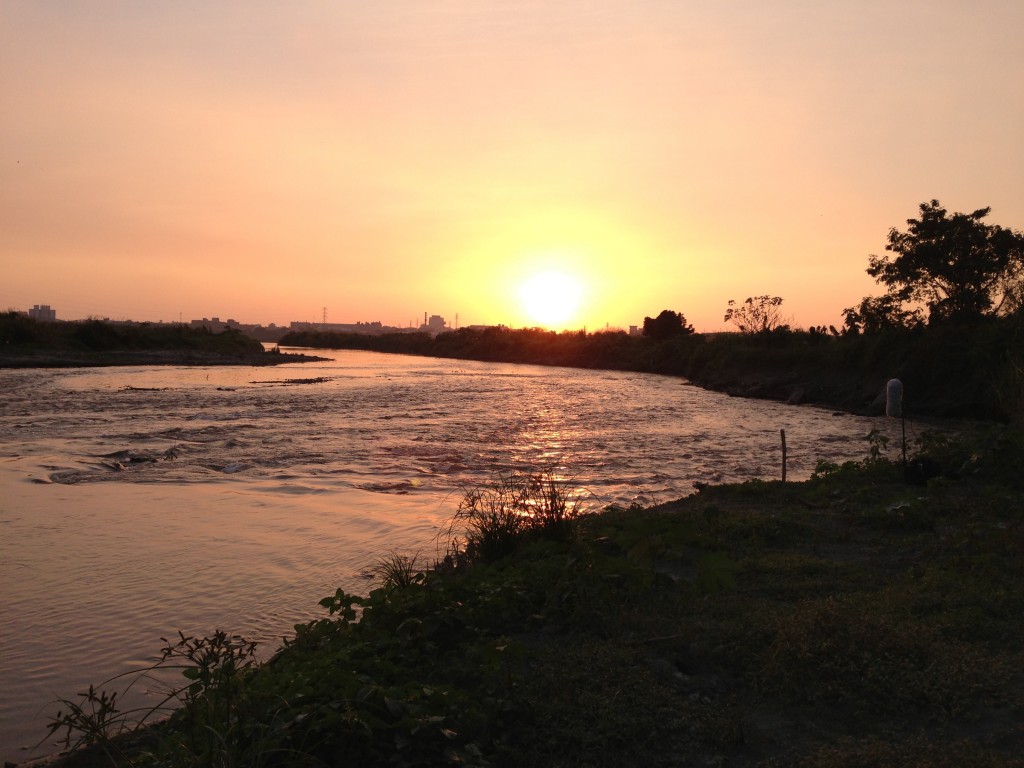 As it goes, there were a lot of other things that caught my attention before I made it here. First was a train overpass…

Let me mention real quick that this park is pretty cool because it has several old train cars you can walk inside of. Kind of a museum of sorts. 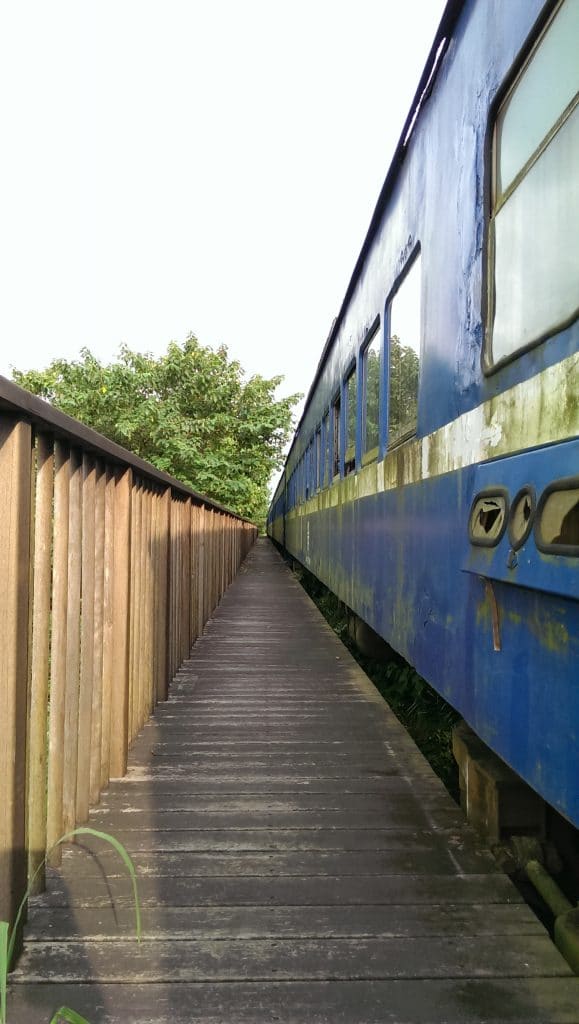 The train tracks two pictures above sit parallel to an older set of tracks that took a nasty beating from a typhoon way back when. You can actually walk out onto the old tracks (high above the ground) and can make it out really close to the river. 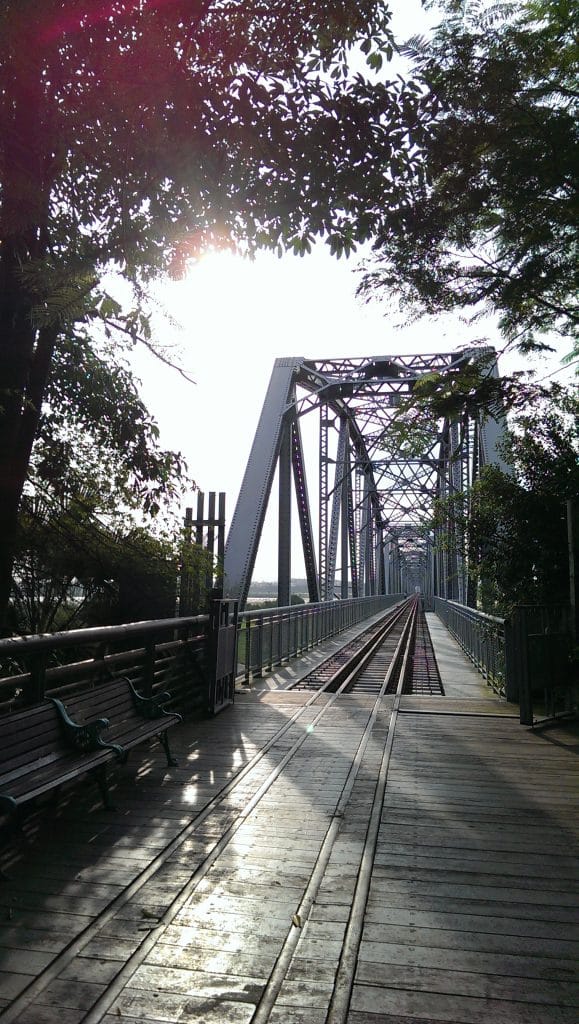 There’s a gate to stop you from going any further, but it looks easy enough to climb over. If you choose to go out that far–and I doubt anyone would stop you–it looks like it will take you right over the river. You’ll eventually get to the section that the typhoon ate and have to stop.

But enough tour guide talk. Back to the recording stuff…

I eventually happened upon some farmer’s “roads” and decided to just go with it to see what I find. 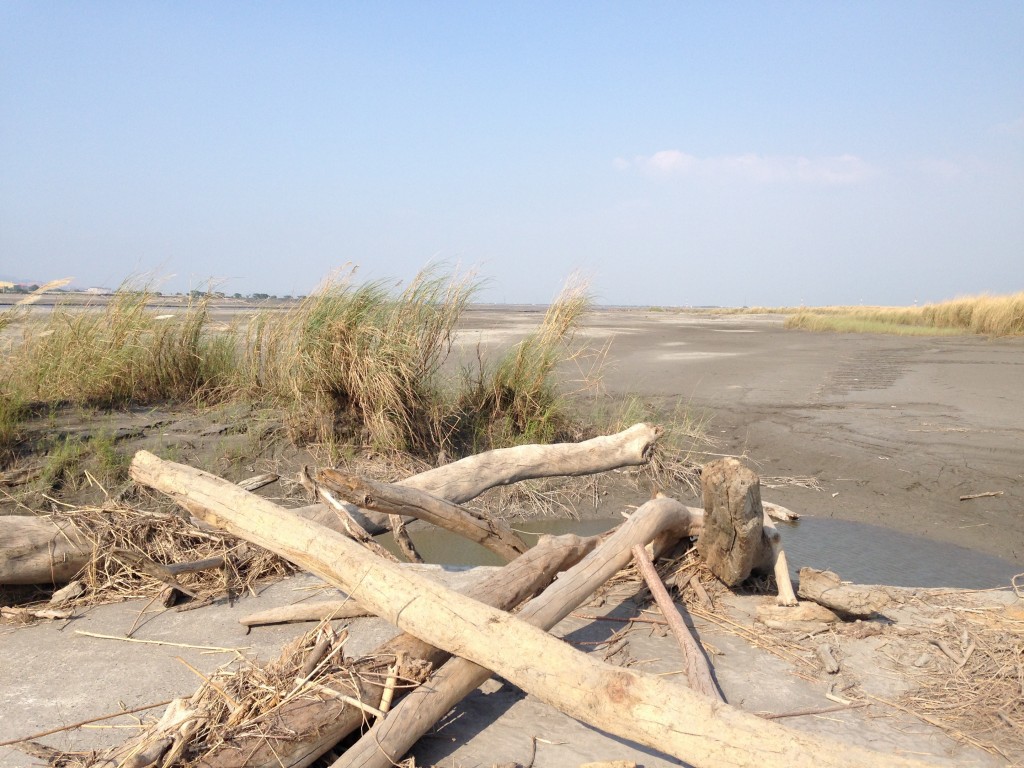 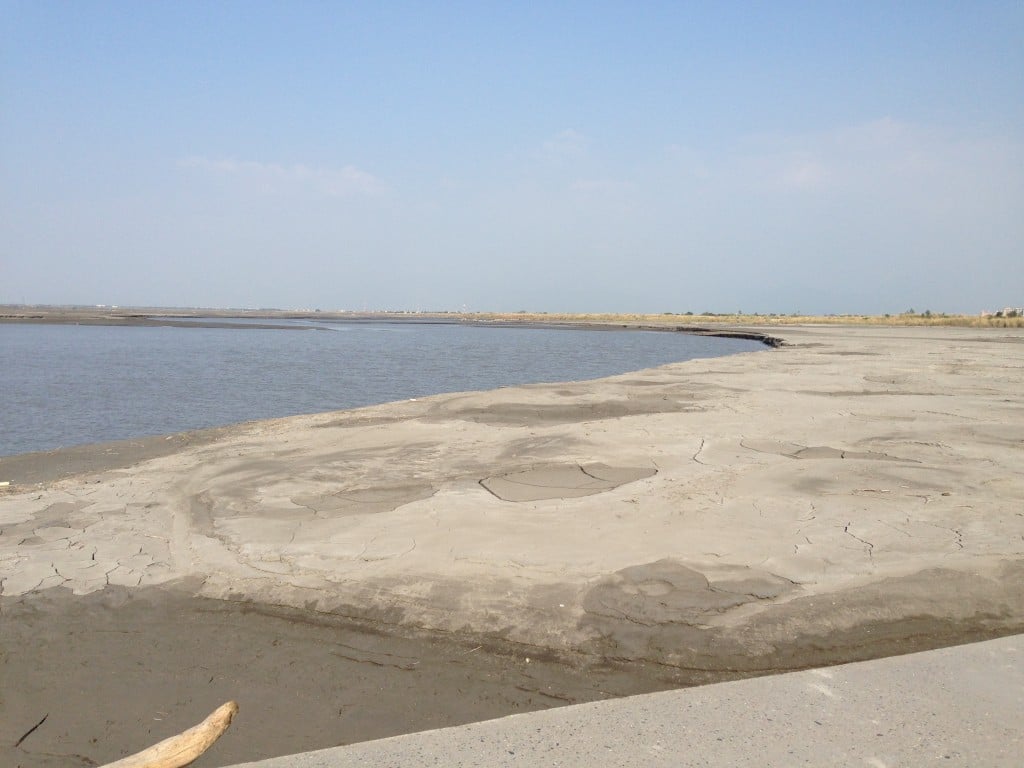 I eventually made it to the end of the (I don’t know what the hell to call it – so let’s just say…) “concrete pier” which took me right to the river. It sounded nice, so I recorded it. 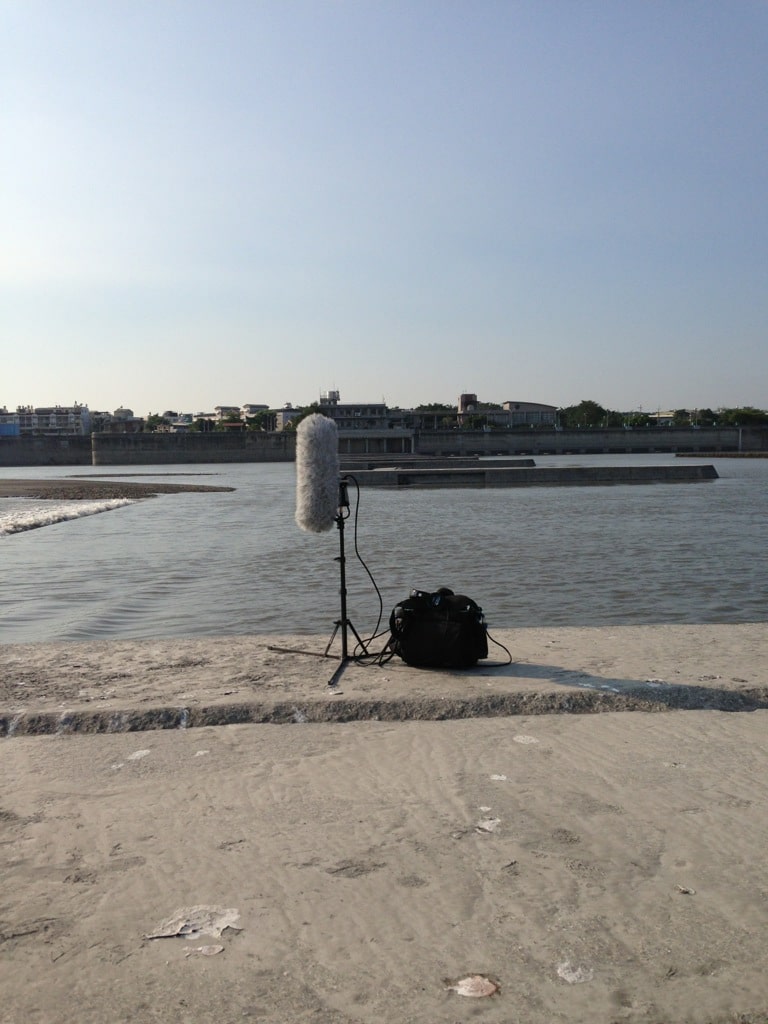 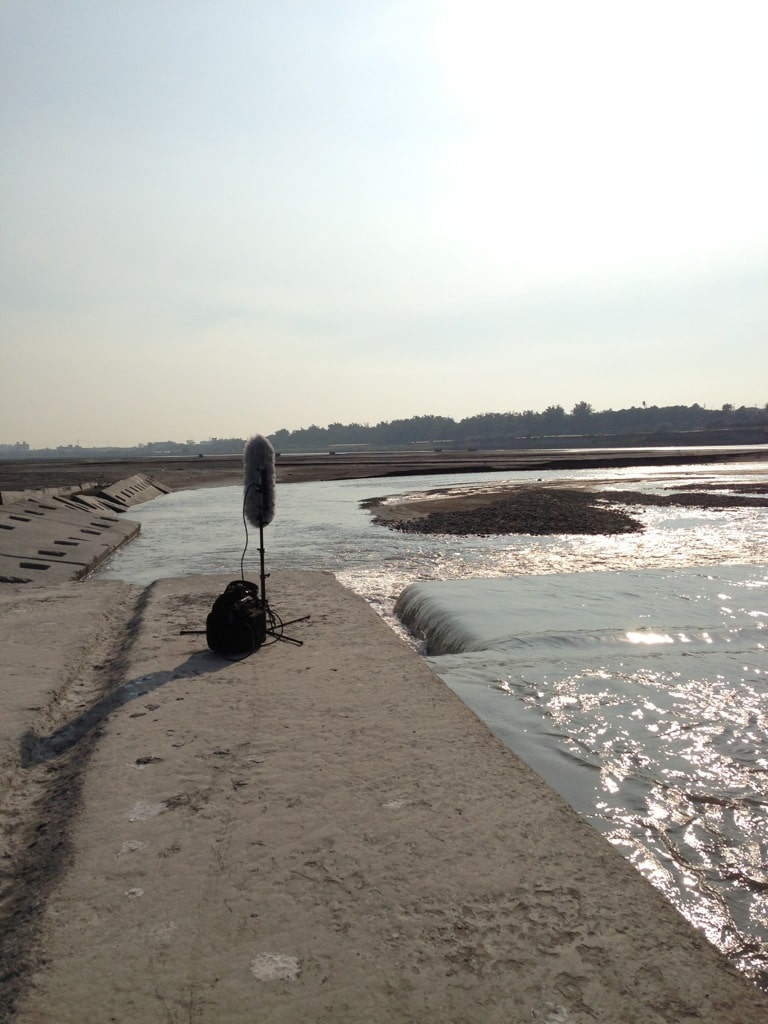 So far all the recordings seemed to go well, but I had to record a lot longer than I had wanted. The entire day there was [in my best guess] a C130 taking off, landing, doing touch & go’s, and flying all around the area. The Pingdong Airport is pretty close and I guess the military uses it. I also saw what looked like an AWAC flying around later in the day.

At some point an idea hit me and I got out my Google maps app to help me get as close to that airport as I could possibly get. I found the perfect location and it was relatively quiet as well.

I was damn near in line with the runway as far as I could tell with Google maps. So I sat and waited…and waited….and waited…

I recorded various higher-altitude fly-bys, which were cool but not what I wanted. I was about to give up when my patience was finally rewarded. He flew over once–directly overhead–and probably did a touch and go. Then circled around (took 10 min) and landed. He was about 20 meters above me when he landed! That took me back to the days I worked on a Marine Corps flight line. 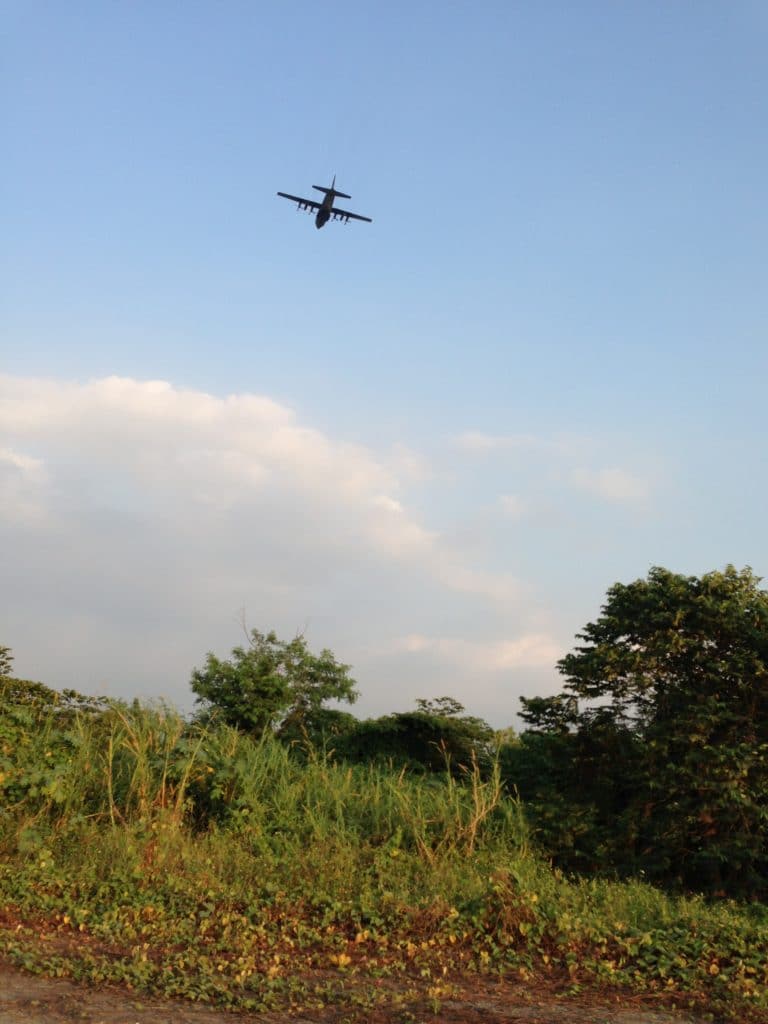 Anyhow, I wanted to share the recording of the first landing attempt I wrote about above. He was probably 50 meters above me I guess? I’ve got three files…

The first is in B-format. I would love for someone with a better surround monitoring system than me to give me their opinion of the recording. It was recorded with a Soundfield SPS200 into a Tascam DR680 (Busman Mod) and converted to B-format with Soundfield’s SPS200 Surround Zone. You’re free to use the recording however you’d like with written permission from me.

And for those who can only listen in stereo, I’ve used Harpex-b to make two stereo files. The embedded players are mp3’s. But you may download a higher quality file to use as you please with permission.

They’re both in NOS configuration. The first is as if the mics are parallel with the ground (how we would normally record things) and the plane passes roughly from left to right.

I’ve been playing around with routings in Nuendo and I think I got them right. But please let me know if you think something sounds off with the stereo files.

Overall I’m pretty happy with the SPS200. Using the Surround Zone plugin, I was like “Ok, it’ll work”. But now with Harpex-B…WOW! I’m really impressed with this plugin. Unfortunately my trial is almost up. I wish this thing cost half the price. My wallet is going to hurt soon…

Well, that’s about it for now. This is officially my first real post with some content in a blog. I hope it didn’t bore you too much.

OutRecording @OutRecording
8
This was my first encounter with finding (what I'm assuming are) pomelo trees in the 'wild'. This is very near the abandoned Paiwan village, kauma'an. I've never been a fan of them, be it their taste or smell. But I wouldn't go and poke holes in them. #OutHiking #Hiking #Taiwan https://t.co/HC5nZNKBFY 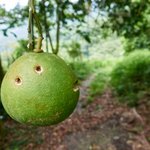 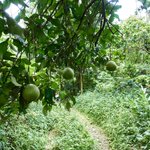 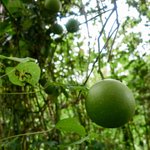