Deep within the mountains on the Baolai riverbed you’ll find two popular hot springs, Qikeng and Shikeng (七坑 & 十坑). Situated roughly between the hot springs is the mountain HsiaoTienYuan – 小田原. At 1335 meters, I thought I would have plenty of time to make it to the top and back if I camped overnight and started early. Boy was I wrong…

The drive from Baolai to the riverbed isn’t too bad now. Before you had to drive to a farm area, park and hike down to the riverbed. But now a road that was destroyed some time ago has been rebuilt. It will take you directly across from Qikeng hot springs. Unless you have a 4×4 or a motorcycle with decent suspension, I would park further up from the riverbed and hike down.

Qikeng looks underwhelming from a distance. But maybe there’s something nice hidden within.

From Qikeng to the HsiaoTienYuanShan trail head it took me about one hour to hike. It was a bit hazy the whole way so I wasn’t able to capture any good pictures. Here’s a few along the way.

I came across this “WO” spray painted on a rock. A little ways down was the first water crossing. Maybe it means “Water Over”? I’m really not sure.

After finding the trail head, I backtracked a few minutes to set up camp in a nice flat area I saw earlier. Nothing of interest happened that night. I woke up, ate, did my business and headed off.

I did find a shotgun shell nearby my campsite. I doubt a shotgun is legal here, but whatever…people like to have fun, right?

After packing everything up, I made my way back to the trail head. Directly across from the trail head is this long, tall waterfall.

I saw many pictures of this waterfall when researching this hike. Most of them looked much better than this. It wasn’t much more than trickle that day.

From the riverbed, the trail goes up about fifteen meters and flattens out. Here I found a nice spot to stash my main pack. After I felt confident that it was safe, I made my way through a tangled mess.

It was flat-ish and tangled like this for a bit. You come around a corner and get a view from the other side. The road to Shikeng…

And then the going got worse…

Worse because, this is all steeper uphill.

As I went up, I got to see various different angles of the waterfall.

Something else I got to see a lot of the whole day was deer poop.

I saw four deer at various times throughout the hike. One was a Formosan Serow. The other three I can’t be sure of because I only saw them running away from me at high speed. They could have been Serow or maybe Muntjacs.

For the first hour it was pretty much going up.

Until I reached a mostly flat area.

I should have taken more pictures. This flat area opens up even more and becomes less dense. However, from here it starts to get even steeper.

The one good thing about this hike are the views. I mean, there’s nothing spectacular to see, but there are plenty of open areas to at least stop to take a look.

Of course, after a nice view always seems to be a crap view.

The whole way up is more or less via the ridgeline. At several places the ridge is pretty narrow. I didn’t get a picture of it, but here you can see how great the wind was on the ridge.

Everything until now was going great. Except I was getting behind on time. The GPX track I found showed that they had made it to the peak in just under three hours. I was also just under three hours at this point…but still a good ways away from the peak. I needed to hurry, but I had a long section of pure steepness to conquer before getting to the top. Let me tell you, it was hell.

I wasn’t concerned with taking pictures at this point. Here’s the only shot I got. It doesn’t really do the steepness justice.

Mixed in all that ground cover I somehow managed to see a Chinese red-headed centipede.

As I pushed my way up I got plenty of nice views again.

I was getting closer to the top, but had spent over four hours at this point. I was beginning to worry about my time. Until finally, after hiking for four hours and thirty-seven minutes, I made it to the top.

But the triangulation point was nowhere to be found. After another ten minutes or so and I found it!

I was really tired. I wanted nothing more than to take a good one-hour break up here. But looking at the time…I knew that was impossible.

I quickly took my peak picture…

(Yeah, I know…I look like I’m using the bathroom or something)

…stuffed as much food into my mouth as possible…and took some pictures of whatever I could find around the peak.

Whatever was printed on this piece of metal faded away long ago. 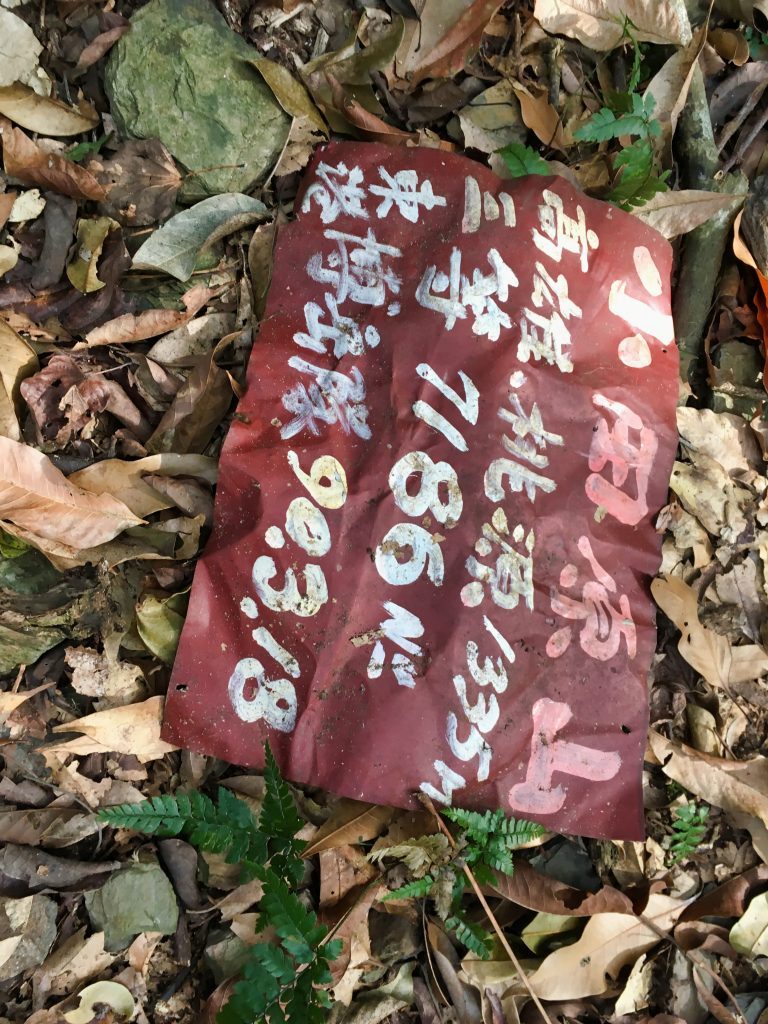 It was about 2:15pm when I set off back down the mountain. This presented a huge problem for me.

I had only planned an overnight. I told my wife I would be back sometime Friday night at the latest. I wasn’t sure how long it would take for me to get down, but I knew I would have to be at the riverbed by 5:00pm if I was going to have enough light to hike back to my bike; it would be dark by 6pm.

So I pushed myself hard down the mountain. I barely stopped for anything. Just a few times to take some pictures.

My wife thinks someone did this on purpose a while ago. I’d like to think it happened naturally. That’s much cooler, right?

Speaking of plants, I also found a bunch of these interesting plants. I’ve never seen anything like them.

Imagine me hiking nonstop down this mountain. I stopped twice to take very short, needed breaks. The only picture stop I had towards the end was for this.

It must have looked better at that moment.

So…after a ridiculous amount of effort and complete stubbornness…I made it to the riverbed! And guess what? It was almost 5pm EXACTLY!

I was so happy that I made my goal. But I was spent! I mean, I had nothing left in me. I had no second wind. I used up my second, third and fourth winds long, LONG ago. I was tapped out. 🙁

This is what created a major problem. I had to hike one hour on the riverbed where I needed to cross the river five times. The river wasn’t terribly high or swift, but it still went up to my knees in places and the current was fast enough to knock over a severely tired person with a big pack on his back that lost his balance.

And before you ask, “Why in the hell did you bring so much!?” Well, I had only planned an hour hike up the river with that on. It’s not so bad when rested. The small pack on the back is what I brought with me up the mountain.

Ok, so my plan was to rest for ten minutes and then go. I thought I would be slow, and at worst spend fifteen to twenty minutes hiking in the dark. That wouldn’t be so bad. But then something happened. The five minutes it took me to hike from the trail head to my old campsite completely destroyed me. I knew there was just no way I could hike the entire way without at least a one-hour rest. So I took off my pack and admitted defeat.

I thought about waiting an hour or so and then hiking the whole thing in the dark. In the end it just didn’t seem to be a safe decision.

I felt really horrible (a bit physically, but mainly mentally). My wife was expecting me that night. When I didn’t show up, what would she think? Would she call the police tonight? Should I expect to see search party lights coming towards my tent in the middle of the night? Or would she wait until morning?

I could only hope she would wait long enough for me to get back into cellphone range before she called anyone.

It took some effort, but I managed to make camp. I tried sleeping early but had a really hard time. My body was sore and in need of rest, but my mind was wide awake. Maybe my body had released some adrenaline to help me get down so fast and it was now keeping me awake. Who knows…

So…after a long and difficult night of sleeping, I was up well before dawn and had everything packed and ready to go by first light.

I made the hike in an hour, packed up my bike, and started up the mountain.

The whole way back I kept looking at my cellphone for a signal. Nothing…nothing…nothing. Then, as I rounded a bend I saw a police officer on a motorcycle driving towards me waving. He mentioned something about my wife. OK, so she did call. I thought, well there’s only one cop. That’s not so bad. They probably just sent up one guy to begin with.

About 30 seconds later I saw a fire department truck, followed by more police, followed by an ambulance! Oh man… 🙁

I explained everything to them and apologized many times for their trouble. One of the fire personnel was in contact with my wife and called her immediately. She was happy, but well…you can imagine.

They asked if I would follow them back to the police station so they can get some info from me. I followed them back. Here’s a short video of that ride.

Luckily it was only about a ten minute ride. So they didn’t have to drive far before they met me. That’s probably why they didn’t seem bothered by the whole thing. I related my story, apologized some more and then was told I could leave. A couple of them asked if I could take pictures with them on the way out. Some things never change. 🙂