WenDingShan 文丁山 is a lower peak on the way up to NanDaWuShan 南大武山. I saw it when I was at the HuYaYuShan 戶亞宇山 peak last February and really wanted to hike it.

I believe most people wouldn’t make a special trip to WenDingShan. There’s really nothing special about it. It would seem more economical to take the short detour on your way up to NanDawuShan. For me though, I know NanDaWuShan will be a tough challenge. I’d rather spend that time and energy on the main hike and not a side trip. That’s my logic anyway.

My hike started at this gate.

This gate is new. You can even see the paint bucket and fresh paint that had dripped onto the ground. It saddens me to see this. This dirt road leads right to the riverbed. It cuts a lot of time from an offroad motorcycle trip up the river. It’s no challenge for hikers to bypass, but it says to me “We don’t want you using our road anymore”.

I had no other choice but to walk around the gate and hope nobody was inside to yell at me. And no one did.

The hike to the riverbed is a short one. From here you can see the “iconic dead tree” that just won’t go away. Respect to this poor guy.

I wasn’t following my GPS and accidentally went into the treeline across the river in the wrong place. Of course this must have been fate because I once again found another cap that must have been left by the “abandoned cap cult”.

After coming out of the wooded area I hiked the riverbed a little more until reaching the trail head.

Someone was doing some kind of target practice.

The last time I was here it was in August. There was no trail head at all. Whatever typhoon or strong storm washed it away. I couldn’t find a way up. So I made one! It took some time, but I hacked my way from this spot to the trail. It looks like others have also taken to using this as a starting point.

You can’t tell from the beginning of the trail, but it used to be a dirt road that vehicles could drive up.

I’m told the road used to go up as far as a cabin that’s used by hikers to stay the night on their way up NanDaWuShan. Too bad the road was abandoned; it would make for a much easier hike.

But as things turned out, this wasn’t a difficult hike at all. When I was here last time it was ridiculously overgrown. I had a hard time finding the trail in the beginning and had to machete my way up almost every step. Now, it was clear and easy.

Most of it looked like this after the first kilometer or so.

One great thing about this hike is that there’s plenty of nice views on the way up.

For the first thirty minutes or so I thought it might be possible for me to someday ride my motorcycle up this trail. The trail head would be a challenge and I would need to move a couple fallen trees, but it seemed doable. That is…until I reached this landslide…

…followed by this huge “dip” in the trail.

After this little messy section, I came to an open grassy area.

The trail for about 15 meters was nothing but a puddle.

It was sorta flowing, so it technically could be considered a water source. But to be honest, I wouldn’t want to collect my water from it. Maybe it looks better in the hotter months.

From here you could get a view of what I believe is Taiwu Village 泰武村 (Ulaljuc).

Nothing much changed in the next hour or so til the peak. The same trail…

One thing DID catch my eye. This tree sitting out in what appeared to be an open area.

At the time I’m not sure why I found it interesting. But later I found something out there.

I still had an hour to the peak. But there wasn’t a whole lot of interesting things to see. Sure, still got some nice views, but it was all pretty much the same.

Finally, about fifteen minutes from the peak and I reached the intersection.

The left trail takes you up towards NanDaWuShan, and the right trail to WenDingShan.

This is where the trail changed. It got steep, but not terribly steep and not for very long.

The WenDingShan peak is unremarkable. There are some rocks to sit on…

…and there’s a small window at the back to see into the valley below, but all in all it’s like most other peaks. However, there is one thing this peak has that beats them all…ANTS! I have never seen as many ants as I’ve seen here. This peak is the winner for ants. All types of ants are their for your viewing pleasure for all you closet Myrmecologists.

After some rest, gulping plenty of water, and eating, I took my peak picture.

I left the peak shortly after and headed back down.

I passed by that tree again and made a halfhearted attempt to search for a way to get to it. I couldn’t find anything obvious, but made a mental note where it was located in case I saw a possible route.

As I hiked around to the other side of the tree I got a clear view of the area. And THAT got me excited! There used to be some houses or less likely, a village there.

*UPDATE* Yes, there used to be a village there by the name of 佳興部落 in Chinese, and Puljti or Puljetji in the Paiwan language. There were approximately 61 households there as of 1942. The villagers were moved in 1954 to I’m assuming the current location of 佳興部落 village.*

Now I really wanted to find a way to get to that spot. I knew it had to be back from where I came, but I wasn’t about to backtrack. I thought maybe there might be a trail from below, as the main trail would wind around below it. But I couldn’t find one. I definitely plan to head back to visit those abandoned houses.

About twenty minutes later on my way down I found these old concrete pillars.

I unearthed this old radio near one of the pillars.

I have no clue what used to be built here. There were these old bags of…dirt!? Anyone know what this place is about?

That’s really about it. The rest of the hike was uneventful. I guess these trees looked kinda cool.

I made it back to the riverbed, then up the other side and to my bike without incident. I wouldn’t put this hike anywhere near the top of your list, but if you’re looking to do something different and want to try something not terribly difficult, then try WenDingShan. Just don’t go in the hotter months. You’ll regret it. 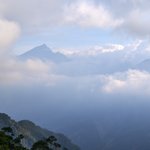 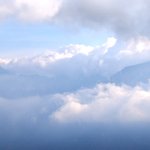