Home  /  Hiking  /  Trip to Walusixi – 瓦魯斯溪
Hiking Taiwu, Walusixi, waterfall, 瀑布, 瓦魯斯溪 3 Comments
Last year’s post about getting stuck in the mountains during a thunderstorm brought to mind the time I was stuck deep in the mountains on a riverbed while it was raining. I’d like to follow up with that story, which may have been even more dangerous.

At the end of March last year I drove my bike to Walusixi 瓦魯斯溪 behind Taiwu to try and get to a waterfall I had heard about.

Twice I had driven my bike within a couple hundred meters of it but hadn’t realized it was there. In late February I tried and failed, largely because I started late and feared I wouldn’t make it out of the riverbed before dark. (Navigating a riverbed on a motorcycle in the dark isn’t all that easy as you’ll soon learn) So a month later I woke up at 4am to give myself plenty of time. But stupid me drove to the wrong riverbed! I must be getting old because that has never happened. I only lost 30 minutes, which didn’t seem to be a big deal. Little did I know, I really could have used that extra time.

After riding nearly an hour and a half, I couldn’t easily go further on my bike; so I parked it and I started the hike. For some reason I always find a cap when I’m hiking or riding. I firmly believe there is an “Abandoned Cap Cult” that strategically places these caps in the mountains for some nefarious reasons. There’s no other explanation! There can’t possibly be so many careless people losing caps out there.

It took me a solid two hours of boulder hopping…

…until I reached the “waterfall”. And man, was it ever worth it!

As you can see, there wasn’t a waterfall but there was this large pool with spectacular blue and green colors. The green was the moss on the rocks below the water. I swam briefly, but it was freaking COLD! The water was also surprisingly deep on the right side. (Watch me in the water in the video below)

Two years ago I drove my motorcycle a little past this location. It’s the red trace in the picture below. The green trace was this recent trip. There definitely wasn’t a pool there when I drove my motorcycle. I looked back at older maps and it appears this pool was there before the Morakot typhoon. I’d have to guess that it was filled in with rocks and other debris from that typhoon and has finally been uncovered recently.

It was nice and sunny the whole way, but 30 minutes after arriving, clouds started rolling in. I knew there was a high chance of rain, but figured the “scattered thundershowers” meant five or ten minutes of light to medium rain and then nothing the rest of the day. The forecast also said zero chance of rain by 5pm, which gave me a false sense of security. Well, I guessed wrong.

It rained a bit and stopped for another 30 min…just long enough for me to eat. Then all hell broke loose.

The two hour return hike turned into three hours. It rained endlessly. Where there was barely a river in the morning now flowed an actual river slowly filling up. “Flash flood” briefly entered my mind, but I thought with the landscape and size of the river itself, it wouldn’t happen. Yeah, I was just trying to make myself feel better.

Along the way there were numerous rock-slides: small to begin with but gradually larger and larger rocks began to fall from the mountains around me. If that doesn’t get your attention, nothing will. When those huge rocks come tumbling down, you FEEL it far more than you hear it. I tried to stay away from the edges because of these rock-slides, which is partially why it took longer to get back.

On a good note, I saw a heckuva lot of newly sprouted waterfalls on the way back. I suppose that was fate’s way of making it up to me. I didn’t get a waterfall earlier, so now I can have many little ones!

And I also found that I made an excellent choice in shoes. Those bad boys stuck to the wet rocks like glue. Ok, not ALL the wet rocks – I doubt many shoes would do well on the really smooth rocks. But for everything else, I’m honestly impressed. Though they did give me horrible blisters. (My fault for not wearing socks)

They’re Merrell – All Out Blaze 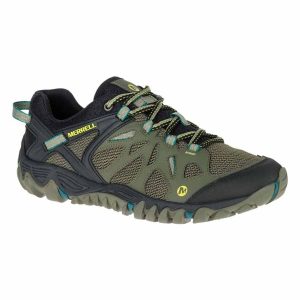 They’re also pretty darn good for normal hiking. I’ve chosen these over a traditional hiking boot on a few occasions. Though I will say they’re not so great if those wet rocks have moss on them. But I’ve yet to find a shoe that works good on wet, mossy rocks.

When I finally made it back to my bike it was nearly dark. iPhones apparently make up for low lighting. Because believe me, it was not this bright.

After I changed and loaded up the bike, it was pitch black. Cloud cover completely obscured the sky. Luckily I’ve got plenty of auxiliary lighting on my bike, so I could actually see what was in front of me. But the next bout of bad luck came…my bike wouldn’t start.

After a good 10 minutes of trying, and worrying the battery would die, she finally fired up and I made my way out. I decided to exit at a spot much closer from where I had started. It was still drizzling a bit and the river’s current was stronger and getting higher. Navigating my way out was frustrating. You can only see what’s in front of you. So making a wrong turn and trying to back up sucks because you have no clue where the rocks are. I found myself making large u-turns instead of backing up. And I made a plethora of wrong turns. My GPS track coming out of there looks like I was drunk. To be honest, I probably would have done just as well drunk.

Normally it would take maybe thirty minutes or less to exit. It took me about an hour. And I’d never seen so many frogs by the way. They were hopping everywhere I rode…hopefully I didn’t smash too many.

I put together this little video of my ride/hike from that day. Enjoy my silly humor.

After exiting the riverbed, I aired up my tires and made for home. I was soaked to the bone and freezing at this point. It wasn’t super cold but the wind did its thing. And no, I didn’t bring a jacket.

A good hour+ of riding and shivering later, I crossed the final bridge for the last 8 kilometers to home. Right when I got off the bridge I noticed my tires sounded loud. Like ridiculously loud. I figured I had a flat…and yeah, I did. Imagine my luck…

The last thing in the world I wanted to do at that moment was take my tire off and swap tubes. I tried pumping it back up, hoping it was a slow leak and I could limp home. But no such luck. It wouldn’t hold any air.

I called my wife to see if she could find a truck to come pick up the bike, but it was around 10pm and nothing was available. So I just kind of sat there in denial.

At some point while I was on the phone a young guy on a scooter stopped and asked if I needed help. I explained that I have everything to fix it but I didn’t feel like it and that I was trying to find a truck to come pick up my bike. He still hung around and started texting someone.

After some time I gave up and decided to swap tubes. I put my tool pouch on the ground and went to get my spare tube and tire irons. Then what happens? The young guy jumps off his scooter and starts rummaging through my tool pouch, finds the appropriate tools and begins removing my rear tire! He literally did the entire tube swap while I watched. His speed and efficiency were amazing. He even took the whole tire–to my slight worry–to a local gas station to pump it up.

Turns out he lived in another city and was there for whatever reason that day. His job is fixing motorcycles and he’s a fellow offroad rider. Freaking amazing I tell ya!

I gave him some cash for his trouble and drove home without incident. End of story.

What do ya make of that day!?

OutRecording @OutRecording
7
Somebody just up and gave up. Their lack of effort disappoints me. #hiking #Taiwan https://t.co/ewWlTIimSN 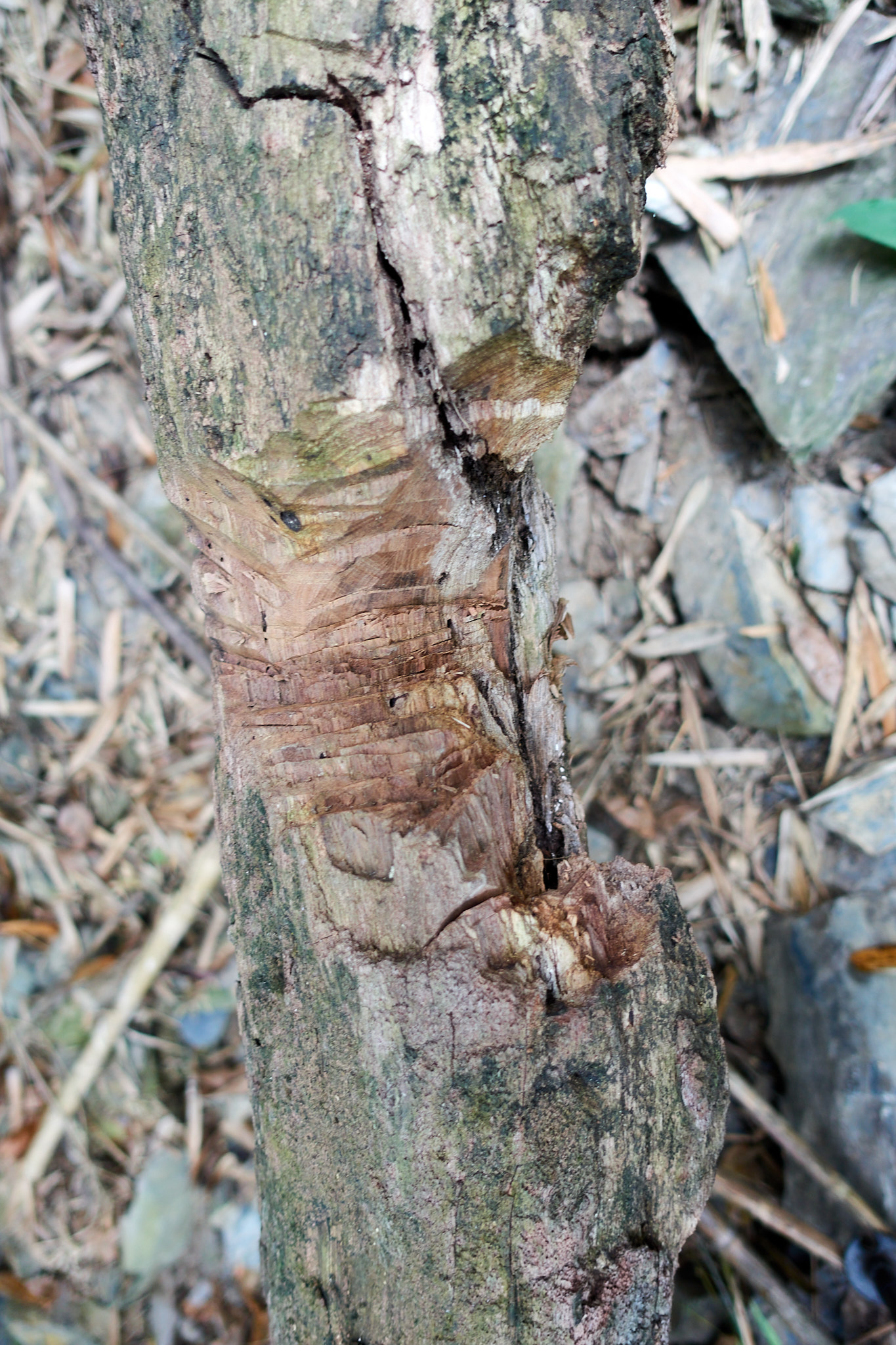