In the past three months I’ve hiked only once because of the rainy season. The rain finally calmed down a bit last week. I couldn’t wait any longer. I had to get out there to hike again! But I knew I needed to get a couple easier hikes under my belt before starting the harder stuff. Yeah, I didn’t exercise much over all that time. Actually, I’m lying. I didn’t exercise at all. 🙁

For my first “getting back in shape” hike, I searched for something that would be relatively easy, well established, and safe; mainly because with all of the rain we’ve had, I worried there would be a lot of overgrowth and possibly unstable land. The thing I wanted to concentrate on was getting back into hiking shape, not machete work and trail finding. My choice was part of the Liugui Security Path starting from Maolin village (茂林) to the Sunshan Weather Station (森山氣象站). Sunshan is a great open space to stop for a rest.

I thought it would be nice to have some company for this hike. So I reached out on Facebook and Twitter and found a couple guys who were interested in coming along. This was a good move because one of the gentleman, Richard, is an avid birder. His sharp ears and eyes located various birds and butterflies along the way – most of which I would have completely missed. He also knew a type of owl call that would attract other birds. I fully intend to use it the next time I’m out with my wife. She’ll think I’m such a stud. 🙂

Ok, that wasn’t part of the plan. It was more of a nice surprise. The plan was for the three of us to meet at Maolin village and drive up the mountain to the trail head. From there hike to the Sunshan Weather Station, passing several peaks along the way. The plan would crudely look like this map.

The hike didn’t go as planned, but it was enjoyable regardless.

The drive up is roughly 470 meters elevation gain over about 4 kilometers. It starts out with a typical mountain concrete road that turns into a double-track dirt road. It’s doable by car, but there isn’t much parking up there. A motorcycle would be preferable, especially on a weekend.

The hike started off easy enough. We followed what must have been an old road that led to the ridge.

There was a short section with some decent amount of overgrowth, but it was easy enough to get through. I’ve never hiked this part of the trail, but I would have to guess it’s normally “overgrowth-free”. There probably hasn’t been many hikers in the past couple months because of the rain.

It wasn’t long before it turned into a nice ridge trail.

The hike up to ZhenWoShan 真我山 was pretty straightforward. There was a view here and there…

…and a couple of these old style markers.

An hour and a half after we set off, we arrived at ZhenWoShan.

I got help this time around with my peak picture.

There wasn’t a whole lot to see up there. Mostly pretty standard “peak stuff”.

We rested briefly here before setting off to WangZiShan.

Radio Towers and an Odd Temple

There’s a temple by the name of WuGongShan 五公山 about 20 minutes hike from ZhenWoShan. The trail from ZhenWoShan to WuGongShan doesn’t go to it, but a very short detour will take you there. I believe most people choose this route because you can later follow the road that leads to the temple back up to the trail. It’s a good deal easier than following the trail. Richard said he wanted to visit the temple, so we headed in that direction.

Along the way we ran into some kind of transmission tower.

About five minutes after that we made it to the temple.

I didn’t take a picture of the temple from afar unfortunately. But let me say that it’s a freakishly large building. Not large in the sense of “skyscraper” large. But considering this place is out in the middle of the mountains with (what I can only assume) very few visitors besides hikers…well, it’s like a massive home temple for whoever lives in the nearby dwelling.

To be fair, this place could have once been a very active temple. The main road that leads up to it was cut off by a landslide some time ago. The only way to get here now besides hiking is to drive into Maolin, go around the back of this mountain and up a heck of a lot of switchbacks, and then down this very sketchy road. I can’t imagine many people wanting to make that kind of journey.

Here’s some pictures of the inside.

This carved table was pretty cool.

There are several buildings nearby. From what I saw on google maps satellite view and with the several dogs barking in that direction that day, I’m assuming one of those is the owner’s house. When I was here four or five years ago, an old man was tending to the temple. Maybe all this belongs to him.

If you’re interested in visiting the temple, click here for the location. Don’t hesitate to contact me for info on how to get there. It’s easy to get lost if you want to drive there.

We followed the road I mentioned earlier to where it links up with the trail.

The views here were the best so far.

Right around where the road meets the trail, Richard noticed this interesting butterfly. When it’s not flying it looks like a leaf. I’m impressed with both the butterfly’s camouflage and the fact that Richard could have noticed it.

The rest of the trail from WuGongShan to WangZiShan was pretty standard stuff. There were a couple spots with a great view like this one:

About 600 meters before WangZiShan, the trail connects with a road network. You can either continue up the somewhat steep trail or jump over and hike the slightly less steep road. We opted for the road. The road used to stop around this area but someone knocked down a lot of trees to extend it up to a couple hundred meters from the peak. From there it was up and up to the peak.

Just before this section is where sitting around for the last couple months bit me in the ass. I was huffing and puffing pretty good and needed to stop every so often to take a break. I think I should have eaten a bit more for breakfast and when we took a break at the last peak. But whatever. That’s what this hike was about. Getting my butt back into shape. It wasn’t long before I caught up with the other two at the top.

I had been here before with my wife over a year ago, so exploring the area wasn’t high on my list of things to do. I quickly sat down and got to eating, resting and re-hydrating myself. But if you haven’t been here before, here’s the triangulation marker and some kind of radio antenna that’s just off to the side.

We rested for a good hour and a half before deciding to head back to our vehicles. If our rest was shorter I think we could have made it to the weather station and back before dark, but it would have been pretty tough. The way I was feeling, I’m glad we chose not to.

There’s not much to add about the hike back. Instead of following the two roads we took to come up, we followed the trail in its entirety. The section near the temple was a good deal overgrown but hike-able. Someone had planted a bunch of coffee trees (or bushes…or plants???) along that part of the trail. One was even planted ON the road. I should have taken a picture. The only other pictures I took was of this part of the “coffee trail”…

…and an interesting pack of caterpillars. I can’t even begin to tell you how long it took me to get them to pose like that. 😉 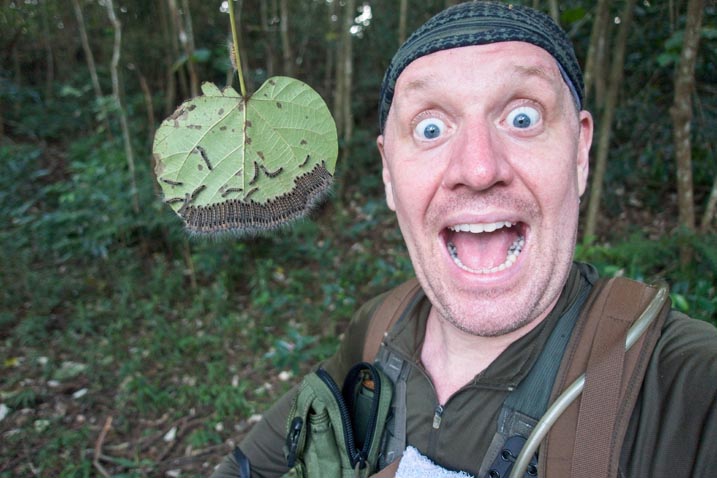 And that’s pretty much it. We made it back to our vehicles without incident.

This was a great hike to get my body back into it. I would recommend this trail to anyone. It’s safe and has several peaks and points of interest along the way. If you want to hike far, you can. If you want a short and sweet hike…perfect!

(This is the trip down. I messed up recording the track on the way up)