This post on Red Dust Canyon – 紅塵峽谷 was originally written for Six Moon Designs to be featured in their newsletter and on their website. Some new images added to this post.

While much of the world had been in quarantine, I was lucky to have been living in a country that still allowed me to hike, Taiwan! Unfortunately, I was sidelined by tendinitis in my knee from all the hiking I had been doing. Nearly two months later, and not completely healed, I decided I couldn’t take it anymore and needed to get out.

Most of Taiwan is mountainous with steep climbs. So there were very few trails that wouldn’t affect my knee. My only real option was a riverbed – the wide open, rocky type that you’ll often see offroad vehicles attempting to navigate.

I had few expectations other than getting out of the house for an overnight hiking trip; and honestly, I had expected the hike to be on the boring side. But in the end, I got WAY more than I had bargained for.

I Won’t Be Alone

When I arrived at the riverbed leading to Red Dust Canyon at the start of a three-day holiday I was disappointed to see a convoy of 4×4’s just getting underway.

That meant my planned campsite would be full (and noisy). But no matter, there are plenty of places to camp along this riverbed.

It started off uneventful. That is, except for two rather large explosions I heard in close succession. I have no clue what they were other than a kind of ‘foreboding’ of what was to come. There was a ‘road’ made by the 4×4’s that was easy to follow.

I crossed the river a multitude of times and my knee gave me no troubles. The weather was sunny with few clouds in the sky. Knowing this would be the case, I had brought my SMD Silver Shadow Carbon Umbrella. It’s the perfect piece of gear for wide open spaces like this. Other than one 4×4 driver who was leaving the riverbed, I passed no one the entire hike. The riverbed was mine!

I figured while I was out there I would also search for the trail heads to a couple seldom visited mountain peaks and also to an abandoned aboriginal village that I would hike someday. In addition, there was a possible waterfall that I noticed on Google Earth up a little ways from the riverbed that I wanted to explore. About three hours into the hike I reached the waterfall!

There hadn’t been much rain recently so the water level was low. It was still a nice photo-op. Unfortunately the smell of death permeated the area. A dead Formosan Serow or Muntjac was in a bad state of decay near the pool. I couldn’t stay.

When I arrived at my next objective an hour later, the trailhead to a mountain peak, I notice an old suspension bridge high up that had mostly fallen apart.

The moment I saw it I knew I had to climb up to see it for myself, injured knee be darned! I climbed up a very steep section of mountain until I reached roughly the elevation I thought the bridge would be located. I didn’t have my machete with me so it took time to find it, but eventually I came across some sort of triangulation stone that marked the beginning of the bridge!

Maybe I’m a nerd, but I love finding old ‘relics’ in the wild. This bridge used to be part of a trail that led to the aboriginal village I mentioned earlier – abandoned since 1954. What a find!

This area happened to be pretty darn beautiful. And that’s when I decided this would be where I stopped to camp for the night.

I set up my SMD Skyscape Trekker a ways up from the river and enjoyed a wonderfully bug-less cool evening with the perfect breeze. Several 4×4’s passed me on their way home, giving me a thumbs up for some reason. Maybe because I was a lone foreigner camping….IDK.

I attempted to call my wife with my satellite phone to let her know all was well, but I couldn’t get a good signal. This is a necessary piece of gear if you’re doing solo hikes in Taiwan – a lot of the hikes here are dangerous.

Eventually night came. I sat there in my camp chair listening to music when headlights slowly crept toward me. I noticed a flashlight shooting from the side of the vehicle in various directions. My first thought was that they must be a family in a 4×4 and their kid was having fun with a flashlight. That’s certainly what my kid would do if we were in the same situation. 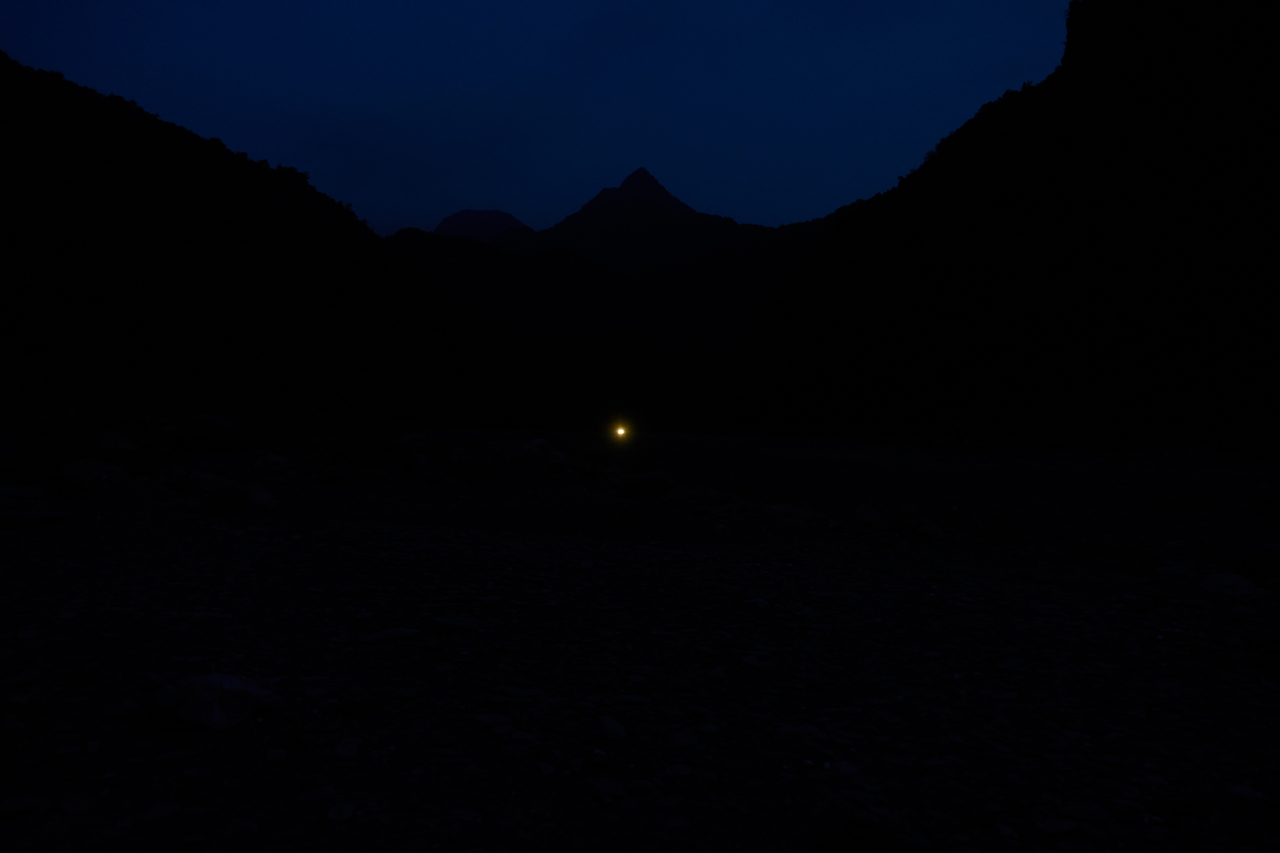 It took some time before they drove up near me; and when they did, they stopped…

I was camped about 50 meters from the ‘road’. I was sure they had seen me and stopped to say hello or something. That’s when their flashlight started moving around near me and a large bird suddenly flew up and over my campsite. Their flashlight followed it. I realized then how wrong I was about them. They were hunters and they were spotlighting!

One of the hunters exited the vehicle and took something out from the back and put it on the ground. This is where I should mention that it’s illegal to own firearms in Taiwan. Aboriginals can own them for ceremonial hunting, but that’s about it. Nobody should legally be out there using a gun of any kind. But there they were, presumably loading their weapon…or possibly putting it together, as many of their rifles are homemade.

That’s when my brain finally kicked in. They were about to start shooting near me and didn’t know I was there. So I quickly turned on my headlamp to its brightest setting and started shining it in their direction like a mad man. They saw it, said a few words, and quickly drove away down river, where they started spotlighting again. I heard a gunshot 30 minutes later in that direction.

That was the first incident… 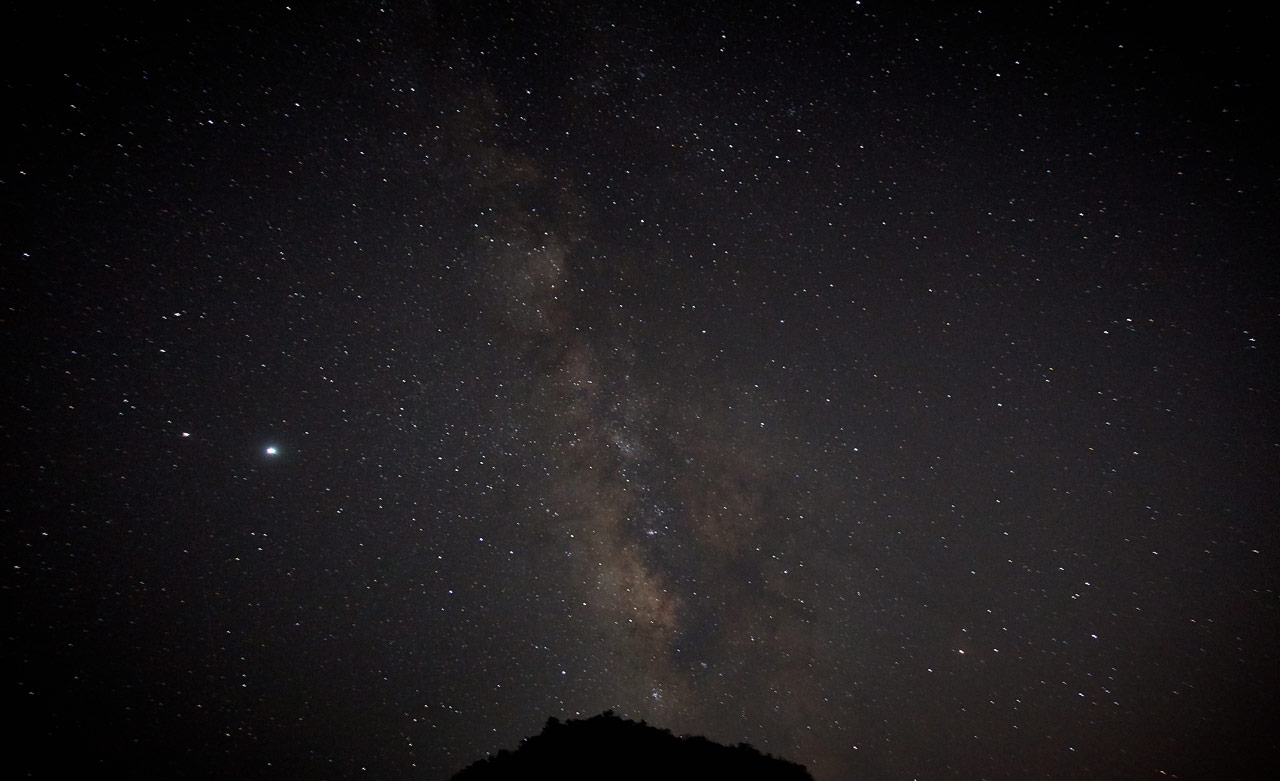 A few hours later, after being asleep for an hour, I was rudely awakened by what I can only describe as a huge explosion. I’ve heard plenty of gunshots in my life and this sounded nothing like one. Perhaps the canyon walls amplified it, but honestly it sounded like dynamite to me. About a minute later I saw headlights once again coming toward me. It was a different 4×4, but they were also spotlighting. So I repeated my headlamp warning to let them know I was there. They also quickly drove by when they saw it. Some twenty minutes later I heard the same loud explosion coming from their direction. I was beginning to think I chose the WRONG day to hike this riverbed!

Fortunately nothing else happened that night other than a large bat that kept me up the entire night with its screeching. The next morning hinted at a perfect hiking day ahead of me. I got my gear together and packed up my SMD Flight 40 FKT and headed back.

Two things of note happened that possibly rivaled the previous night’s events. The first was how my SMD umbrella probably saved my skin – literally. I was searching for some shade on the completely shade-less riverbed.

When I finally found some, it was right under a tall rock-face.

While I was searching for harder ground to set up my chair, I heard the sound of rain on my umbrella, which was ridiculous as there were almost no clouds in the sky! It happened again and again. And that’s when I noticed all the rock fragments littered on the ground. The strong winds above were chipping away at the rock-face and I was being pelted by sharp rocks! They weren’t large, but big enough to split your head open.

The umbrella prevented that from happening. And would you believe it wasn’t damaged?!

What Could that Sound Be!?

The second thing that happened was very odd; at least to me it was. I was off to the side of the river exploring. I heard a low rumble coming from ahead of me.

At first I thought it was a 4×4 but it was far too loud. It would have to have been fifty 4×4’s to be THAT loud. While I was contemplating what it might be, a helicopter zoomed out and rounded a corner and was coming straight at me! It was small. So small that I first thought it was an RC helicopter. That was, until I saw two men inside.

You don’t see helicopters too often in Taiwan. Occasionally you’ll see a military Apache or a SAR helicopter, but that’s it…and never ON a riverbed! This helicopter was 10 meters or so off the water and twenty meters from me and he was flying FAST, which was a heck of a feat in my book. Those canyon walls are really tight where he came from and where he was going. I stood there in confusion and just waved – and the pilot waved back. It took me a moment before I came to my senses to take a picture.

The rest of the hike was ‘boring’ compared to a helicopter, explosions, and possibly almost being shot at! I hiked back to my motorcycle without incident and drove home.

One thing I’ve learned over the years is that hiking trips don’t always turn out as planned. This hike to Red Dust Canyon perfectly exemplifies that notion. And really, that’s a good thing!

This is the track to the bridge and whatever that triangulation-like stone was.