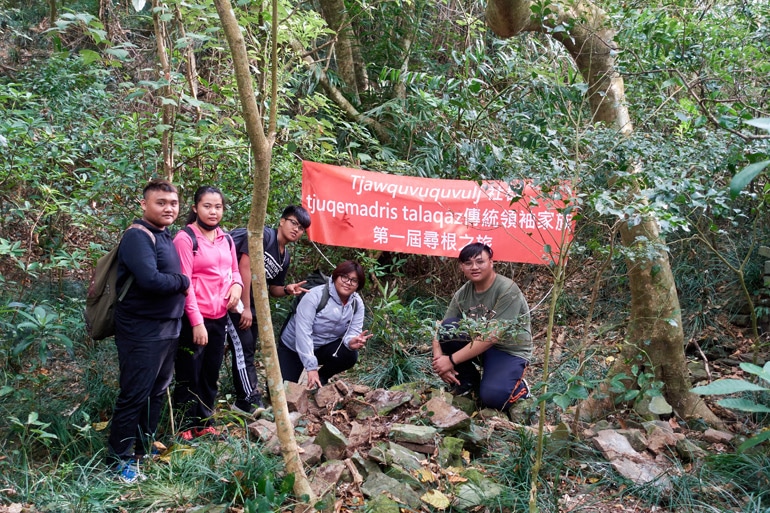 I never thought my passion for hiking would lead to much more than my own pursuit of happiness. But as it turns out, one particular hike opened a door to a whole new world of culture and friendship that I never could have expected.

Last year I learned about Tjuqemadris, an abandoned Paiwan aboriginal village located in southern Taiwan. I knew very little about it other than it would be a challenge to reach due to its location deep in the mountains, cut off from civilization, as well as no info on how to reach it. In the end I did find my way to the ruined village and later wrote about it on my blog.

Fast forward a few months. I received a message on that blog post from a man named Lulji. Lulji is a descendant of the villagers who were forced to relocate when the Japanese were administering Taiwan. And he’s no ordinary descendant; he’s the great-grandson of the last chief of Tjuqemadris!

Over the course of the next several months, Lulji and I become friends and I learned a great deal about Tjuqemadris and its story. Lulji told me it was his dream to one day visit his village. It’s a source of pride for aboriginals to visit and reconnect with their past. For some it’s as easy as a relaxing drive into the mountains, but for others it’s difficult to impossible to make the journey. Due to a landslide long ago, the dirt road leading to Tjuqemadris is now mostly inaccessible. This resulted in the gradual decline of the village as the jungle reclaimed the mountain.

A Hike is Born

Reading my blog post and seeing the pictures of his village spurred Lulji to want to visit Tjuqemadris right away. Since I had already made the trek, Lulji asked if I would like to join him and his family to hike there. I was delighted to be invited and of course accepted.

When the day arrived I drove to the gate of the current location of his village and waited for everyone to arrive. 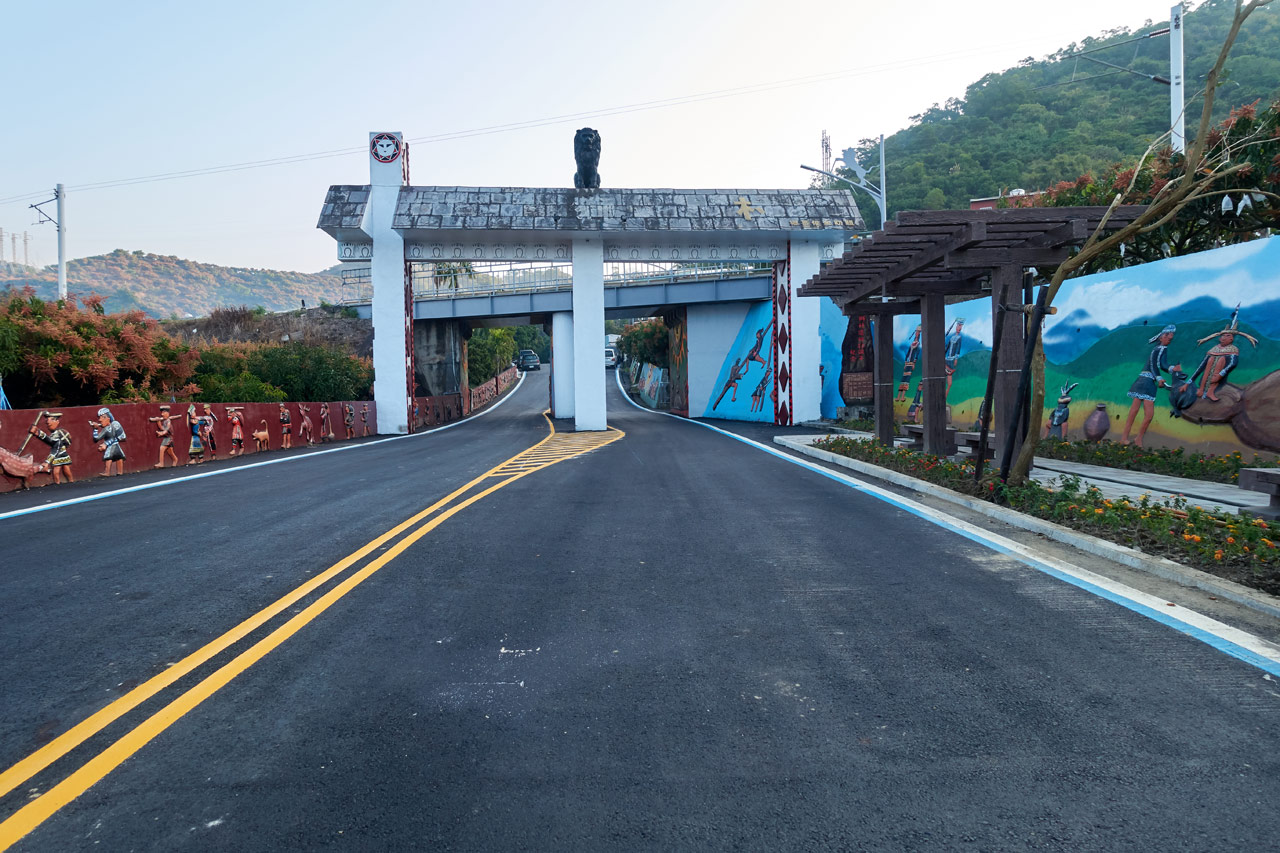 I was in for a surprise when the group pulled up. I was told that there might be a hunter joining us who knew how to get to the village. But he couldn’t make it. So that made me the defacto leader of the hike as I was the only one who knew the way. To add to my worries, some of the group members were younger and without hiking experience; also, at the time I didn’t feel they were suitably dressed for the hike – there’s a good deal of bushwhacking involved to get there. But it was too late for any changes. So off we went. 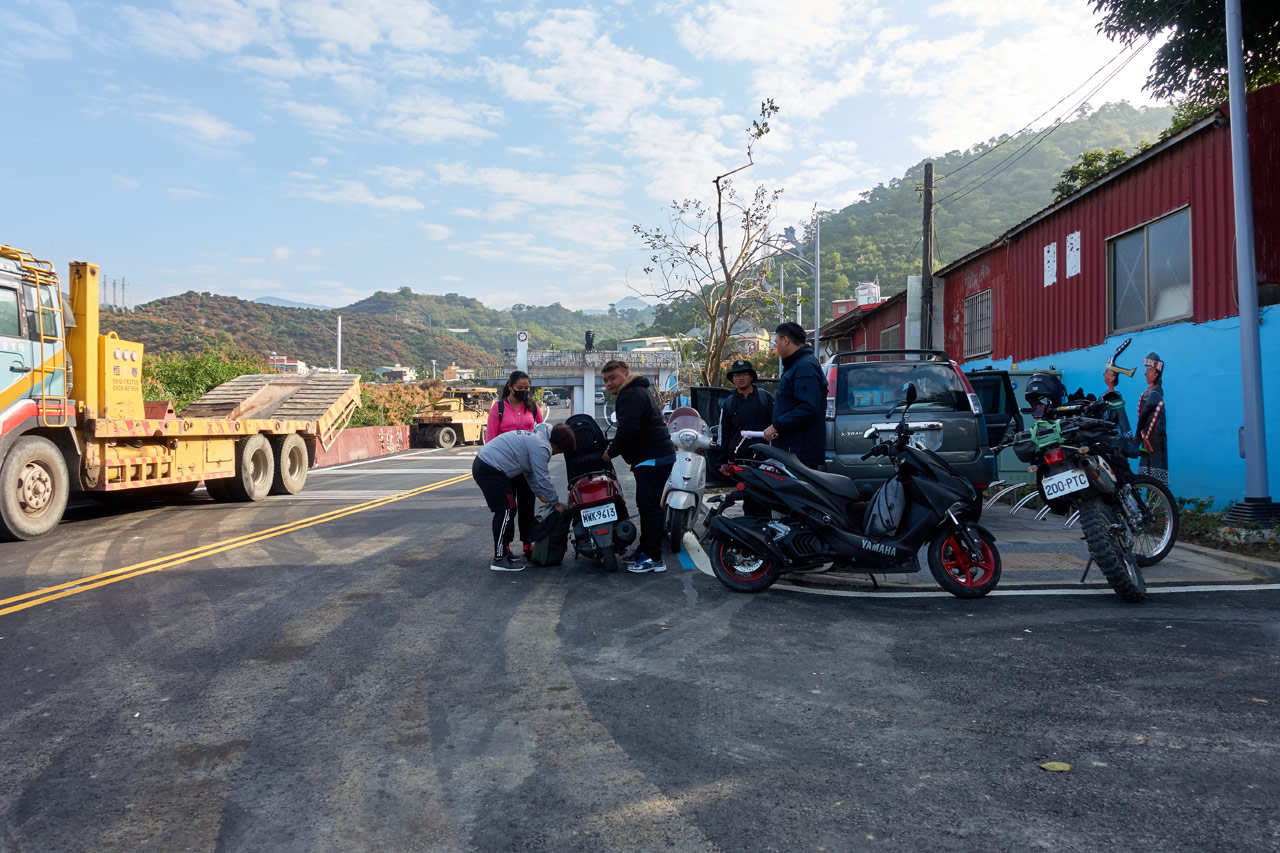 We drove into the mountains and stopped for a picture when the mountain where the village is located came into view. Tjuqemadris is just to the right of Lulji’s right shoulder. 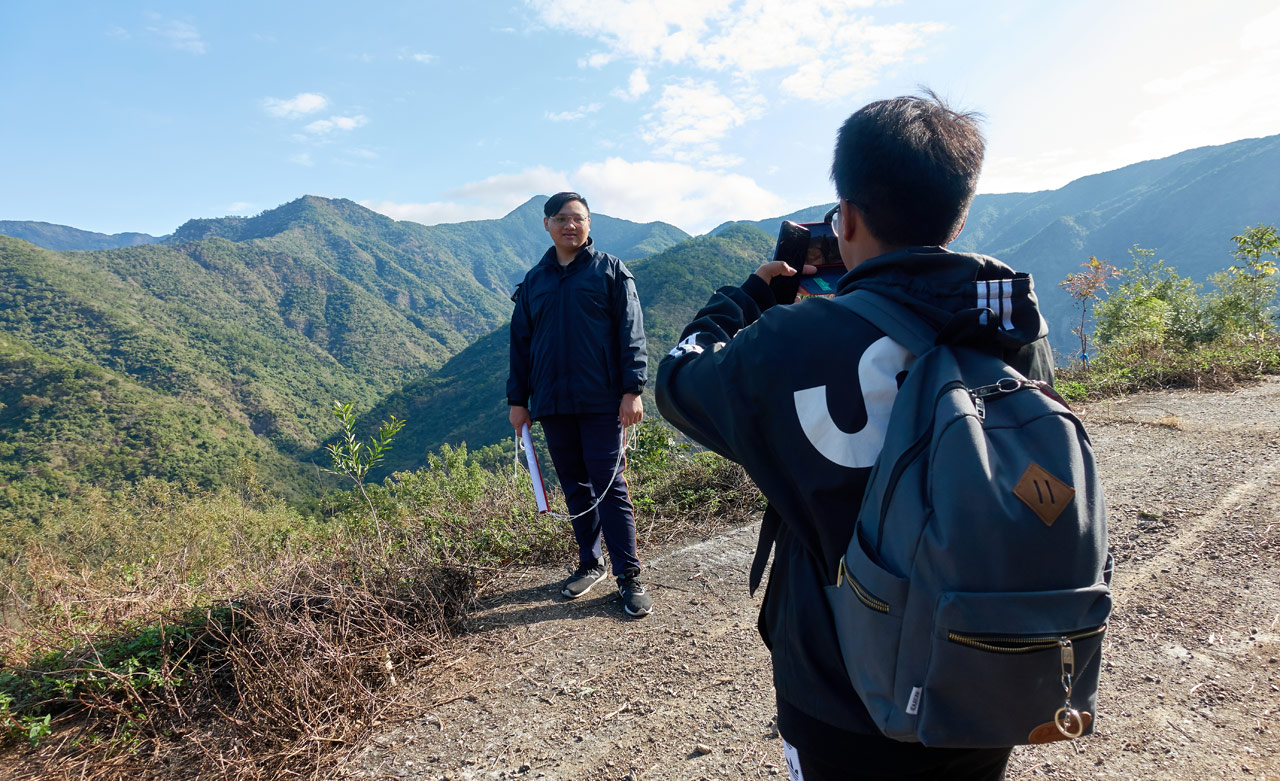 Everyone was in high spirits while they took a group photo “in front of” the village. 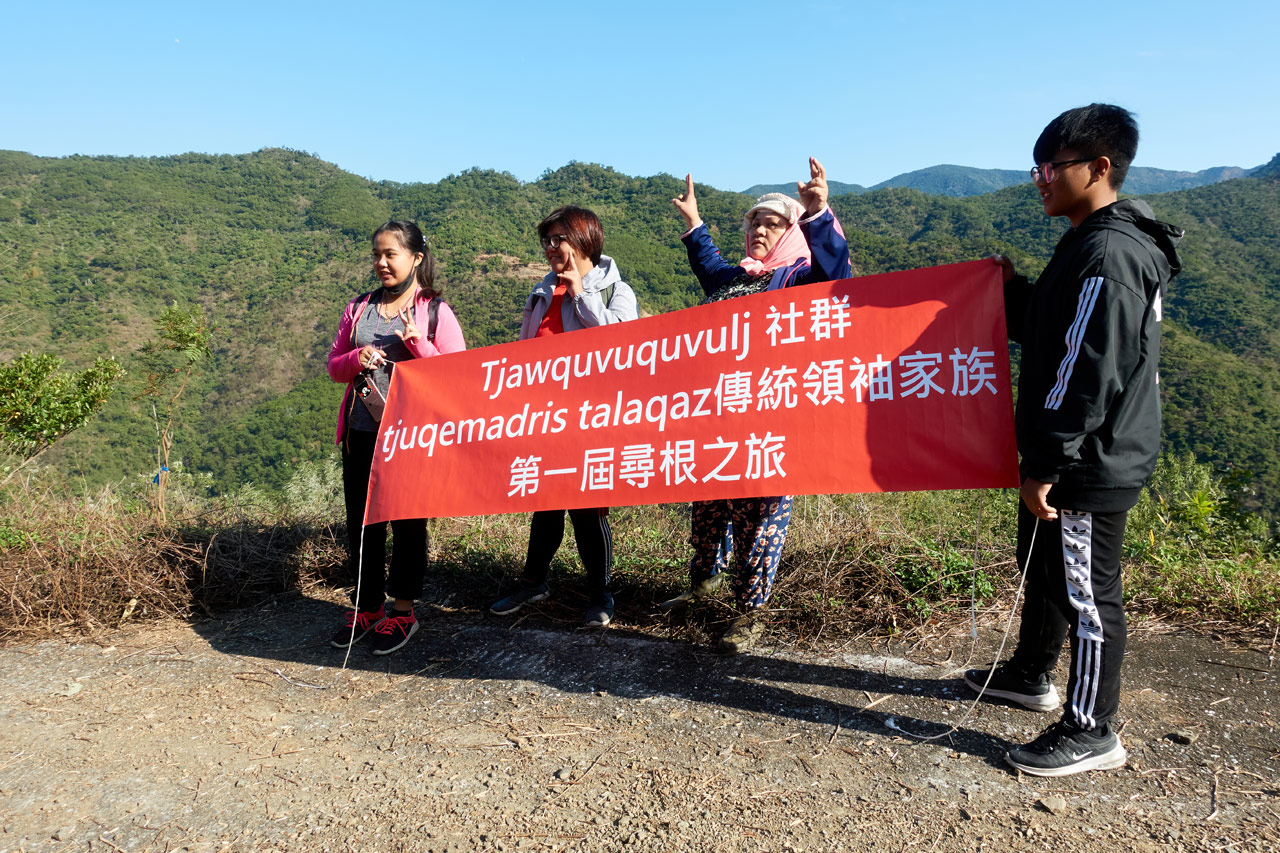 From there we drove as far as we could on two wheels. Lulji’s mother’s scooter got a flat, which would create problems at the end of the hike. But for now, all was good.

After we parked, Lulji borrowed my machete to cut bamboo to be used as walking sticks. 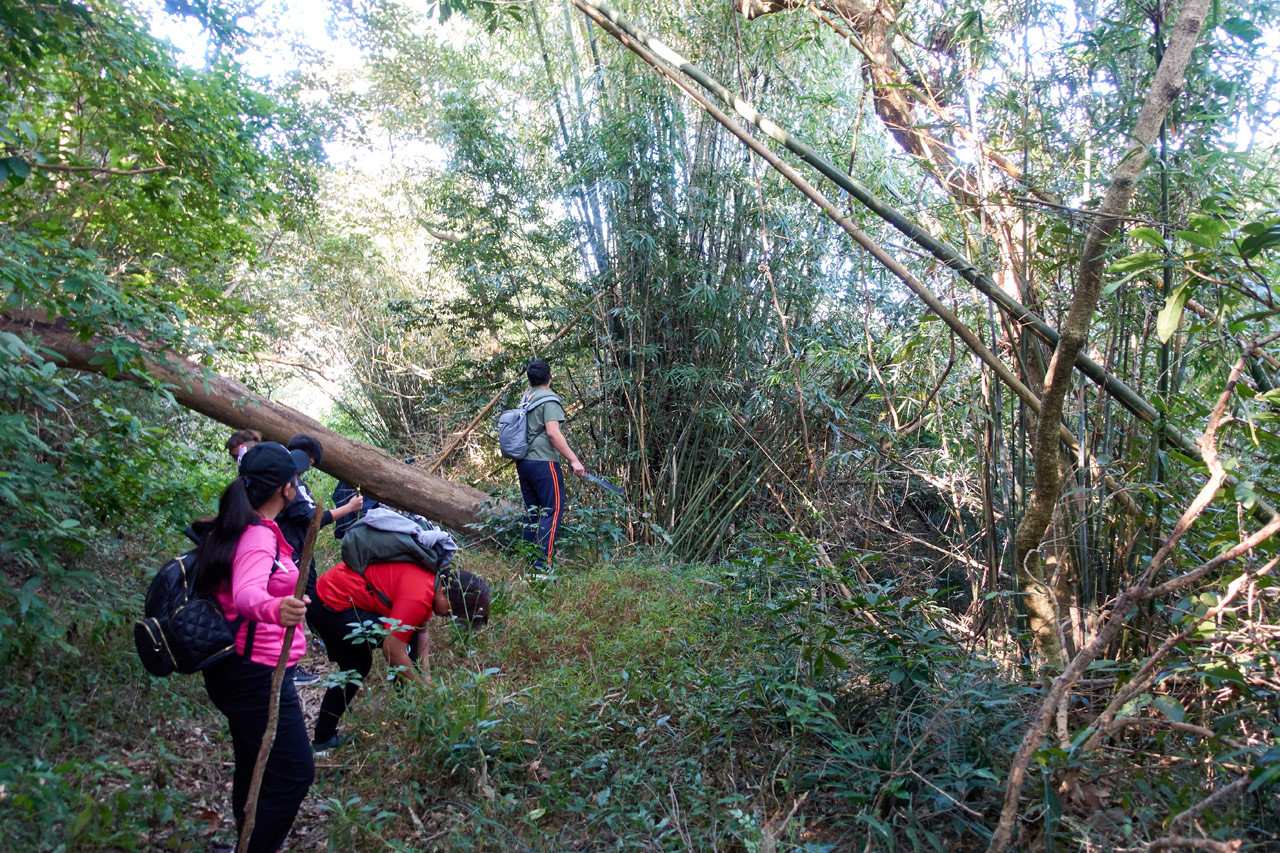 The beginning of our hike was the easy part. There’s a solid downhill trail to follow due to a moderately popular group of waterfalls below. We followed it down while group members would occasionally yell out in excitement. Later they called out to their ancestors to let them know who they were and to not be afraid of them, as well as their foreign companion who was there to learn about their history.

About halfway to the stream, we stopped to contact Lulji’s relatives to see if they could help with the flat tire. There was no cell signal for most of the trip, so my satellite phone came in handy. This is a must-have when hiking in the Taiwan mountains. 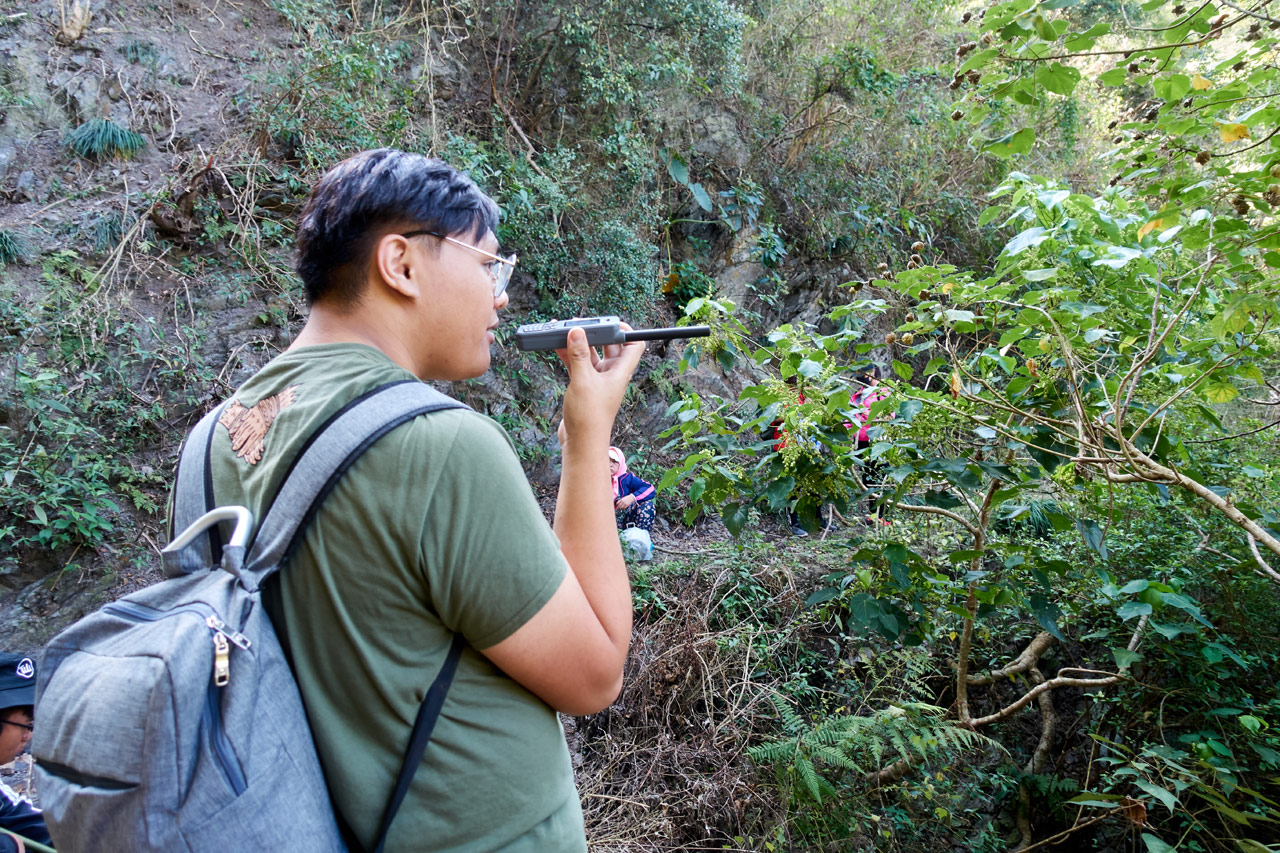 Before long we arrived at the stream, which was our first real obstacle of the day. 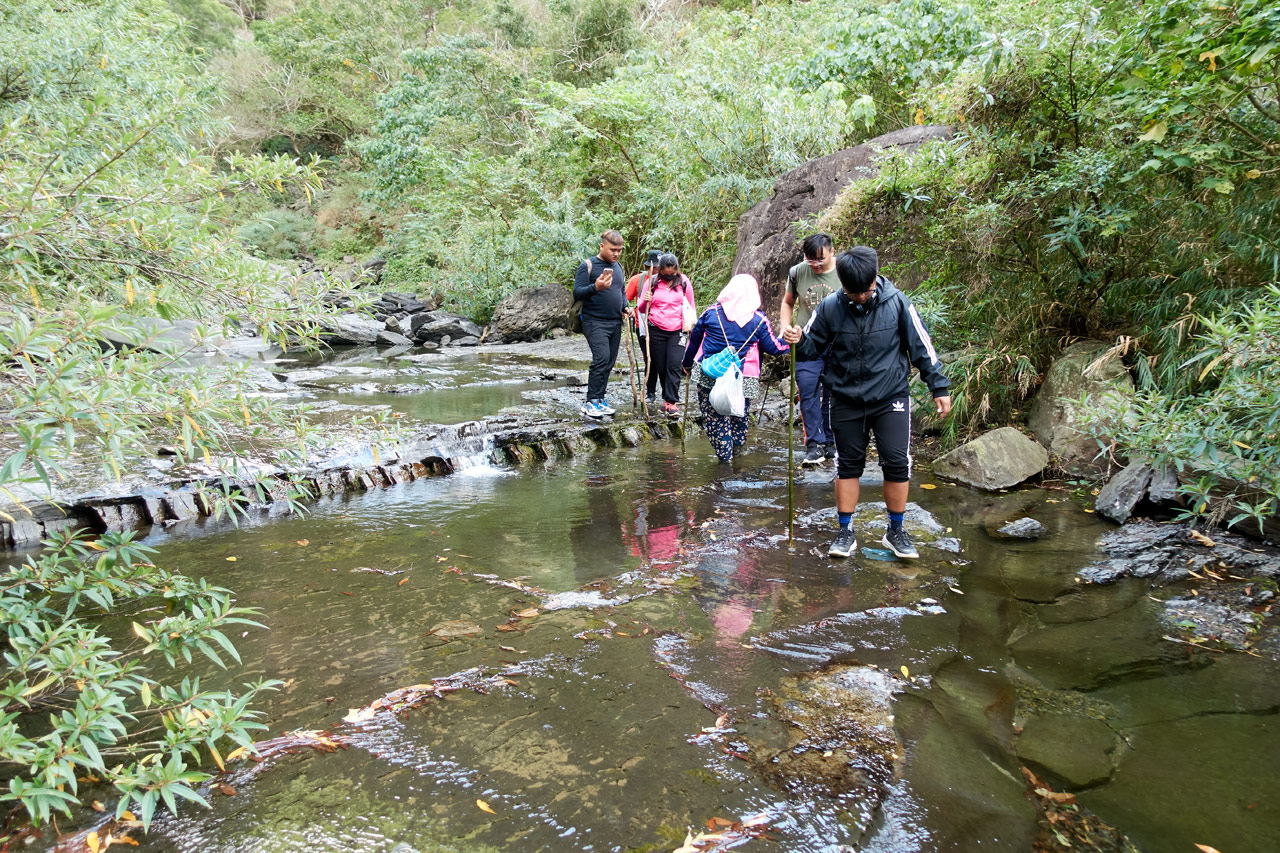 This time of year the water is low, but the rocks are very slippery. We hiked down the stream a bit and then crossed to the other side. We had only been hiking about an hour and a half, but it was near lunchtime, so we took a break and ate a meal that would help fuel us for the tougher part of the hike. 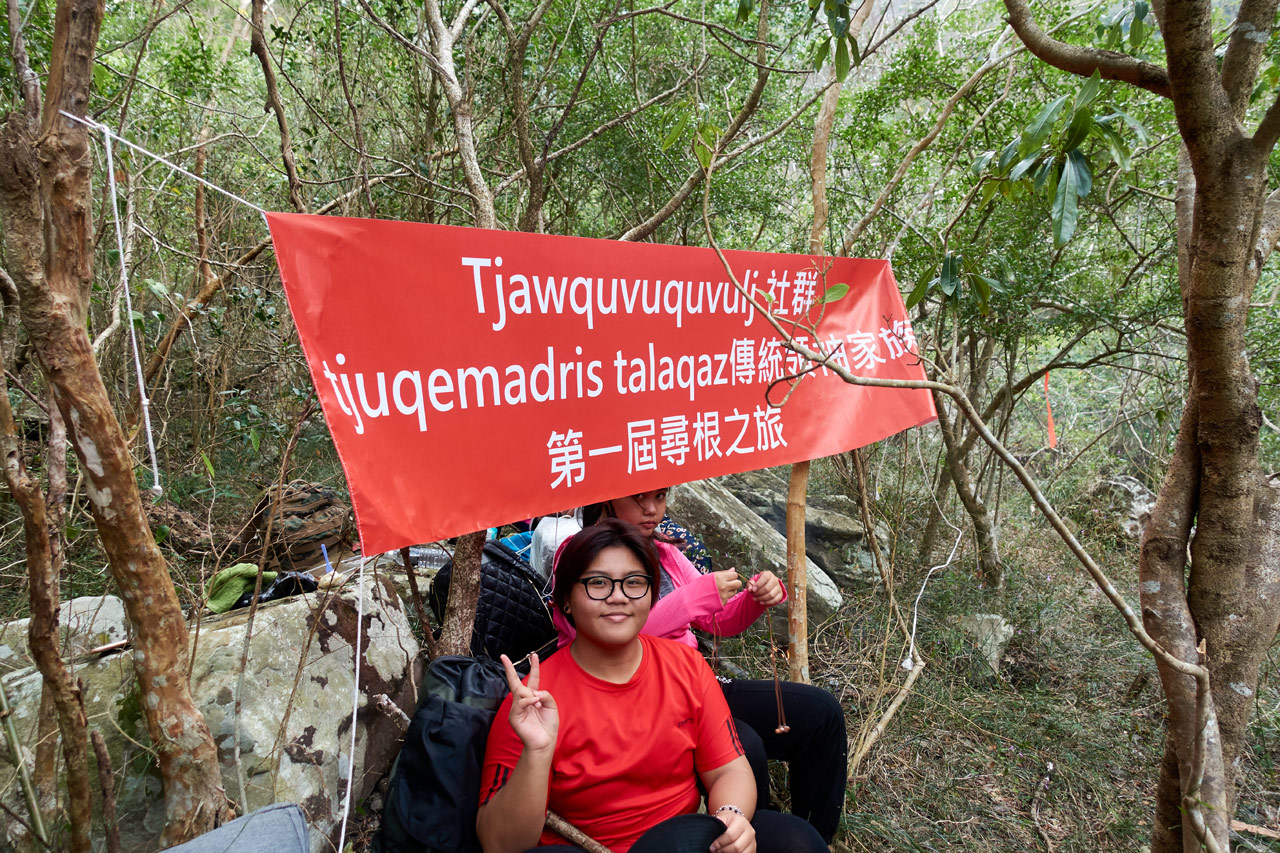 From here on out it was all bushwhacking. The old road used to climb up the mountain about where we stopped for lunch. But now it’s gone, replaced by an overgrown and rocky wasteland. 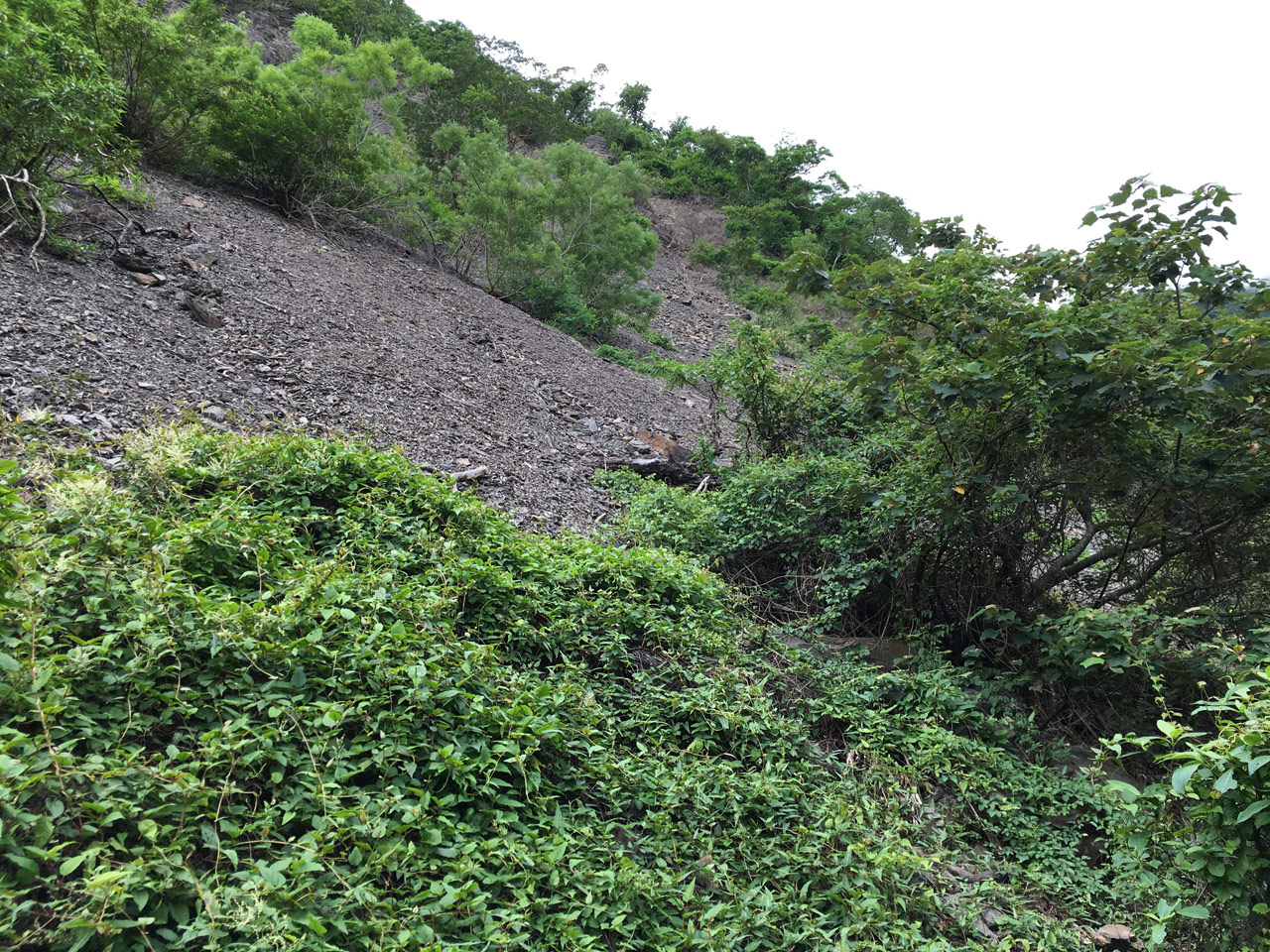 There’s no best way to get up the landslide. But I had found a somewhat safe path through that mess the last time I was there. We followed my memory and climbed up the last rough patch of land to the remains of the old road. 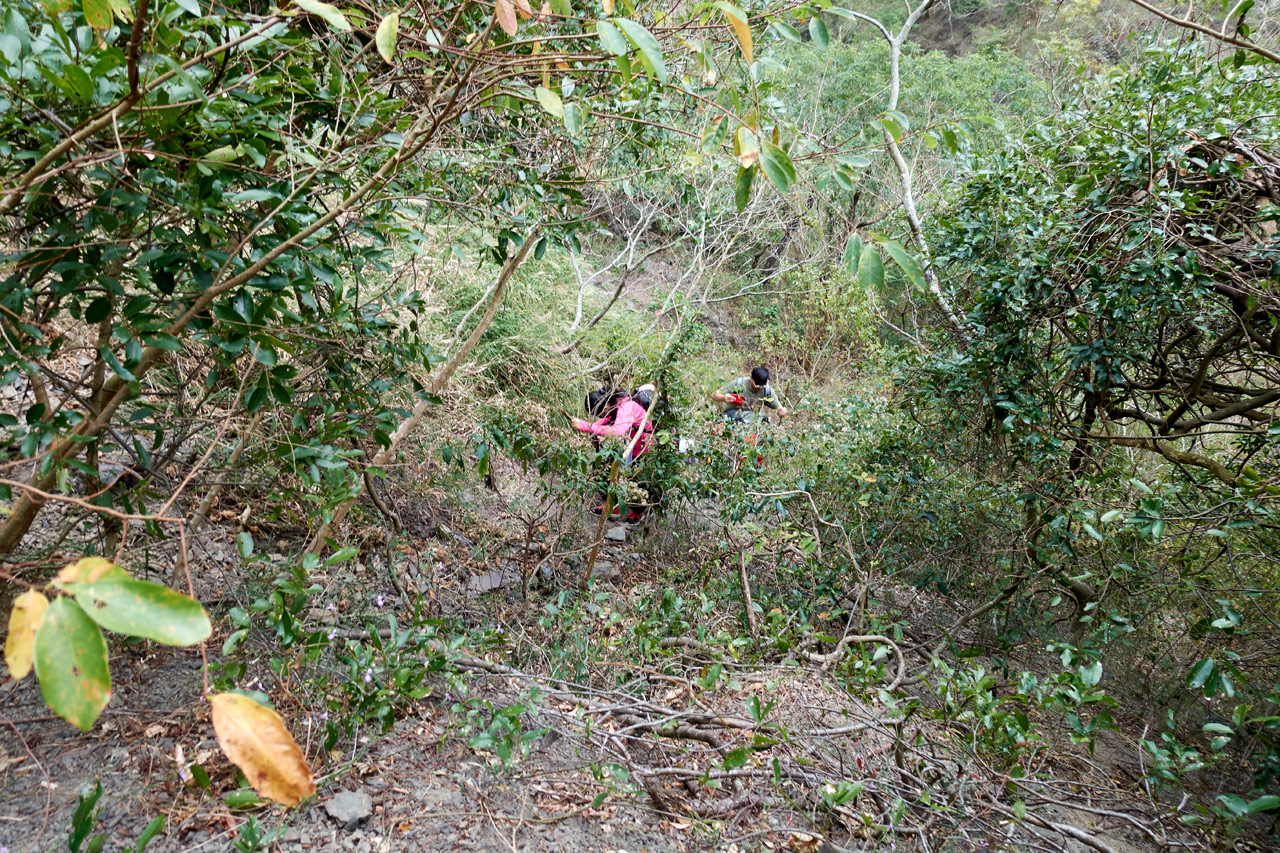 One thing I should mention are the traps. Yes, there were several snare traps placed along the trail earlier. There were still some on this old road, but they must have been set a long time ago and forgotten. The two I accidentally tripped on my last visit weren’t re-set. I can only guess what happened to that hunter. 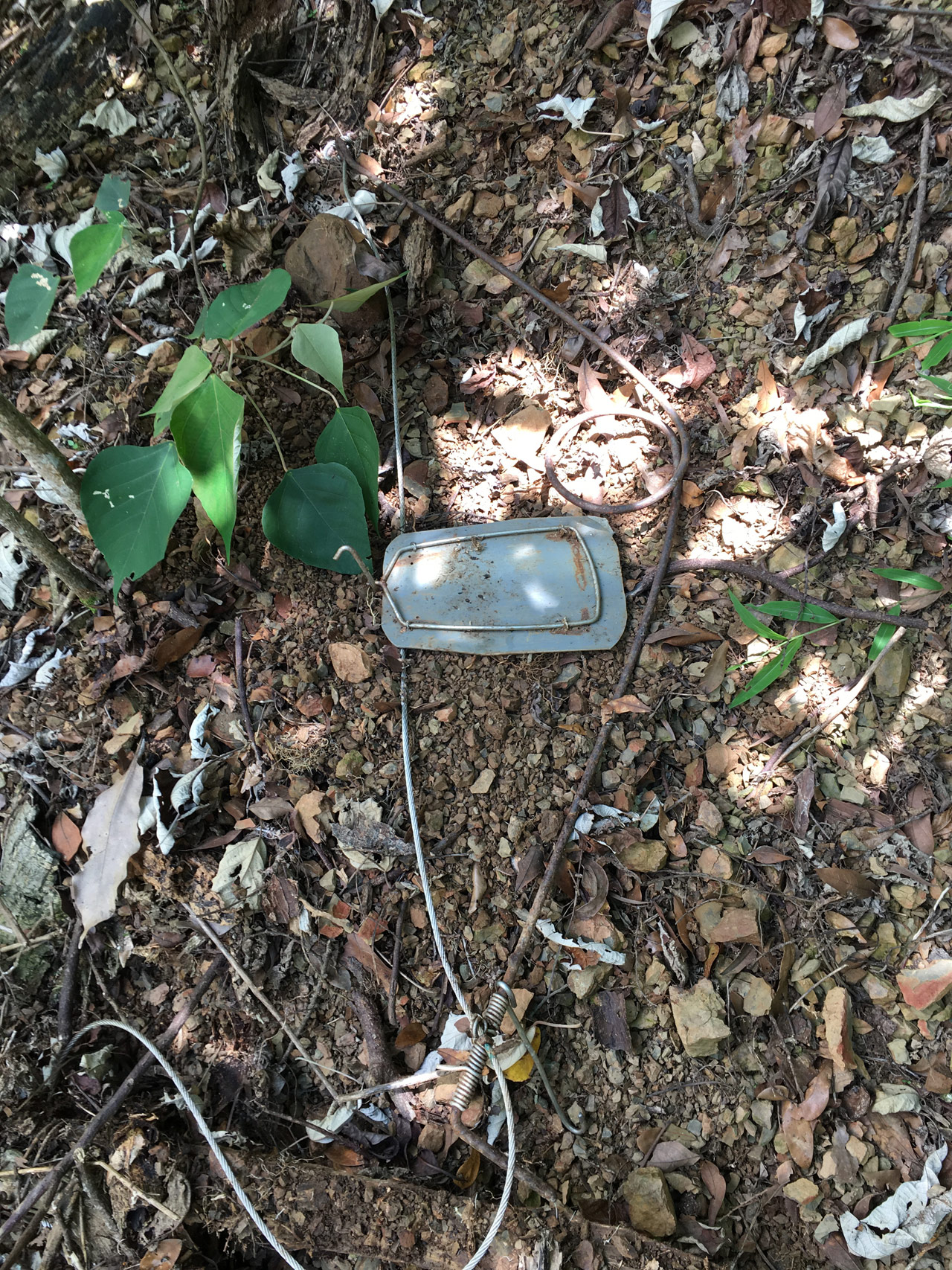 Once on the “road” we had a long hike ahead of us. The elevation gain was gradual, but filled with many obstacles – everything from thick overgrowth, fallen trees and washed out mountain streams to thorny bushes that grabbed every part of you. 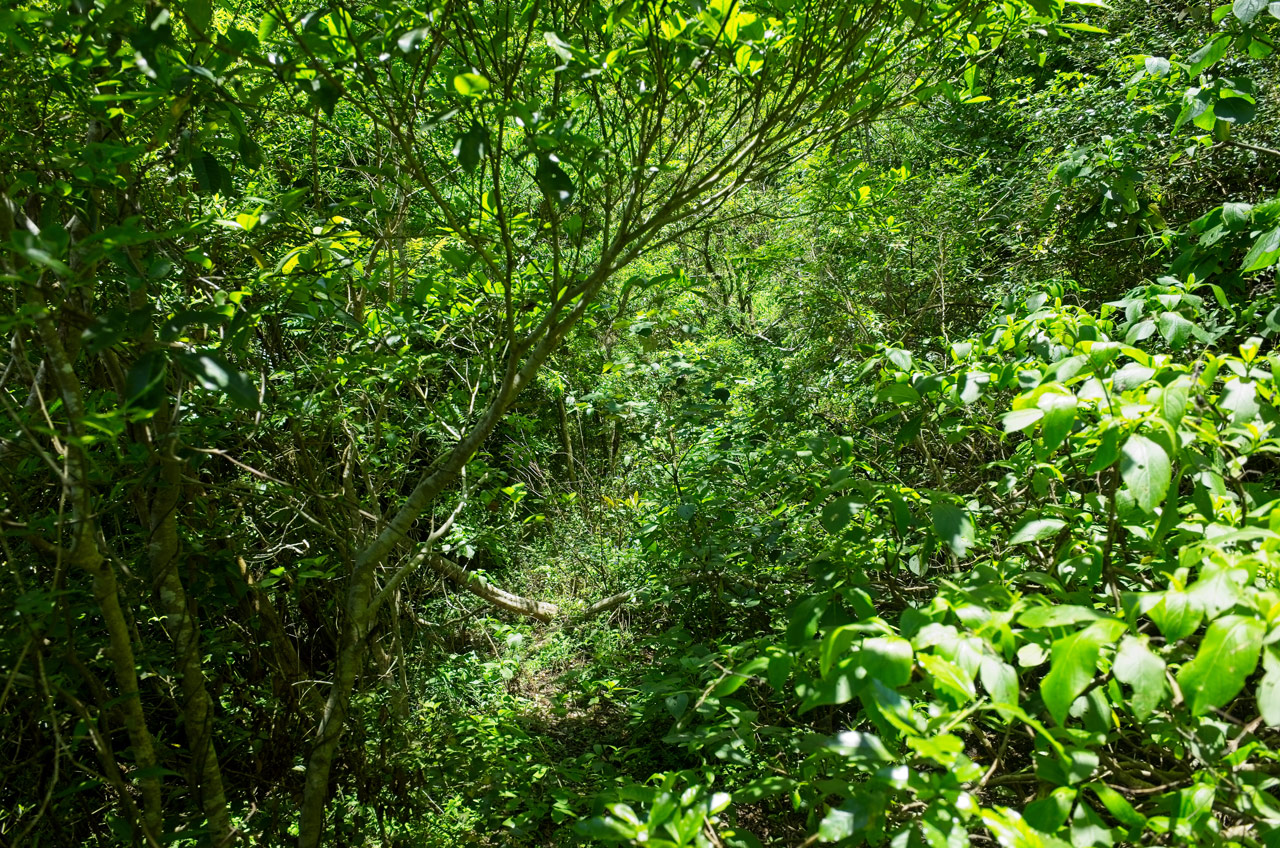 I find this type of terrain challenging and fun, but I worried about my hiking companions. To my surprise, they soldiered on and I heard nary a complaint. These mountains belong to them after all, and I have to believe traversing them is in their blood, in their DNA.

After our hike up and around the edge of the mountain, it became steeper and more difficult to break through the thick overgrowth. At times we needed to crawl. But we were so close – no time to stop. No time to wait. What I hadn’t realized was that our group got split up. Myself and a few others–now at the doorstep of Tjuqemadris–stopped while the rest gradually filtered in. 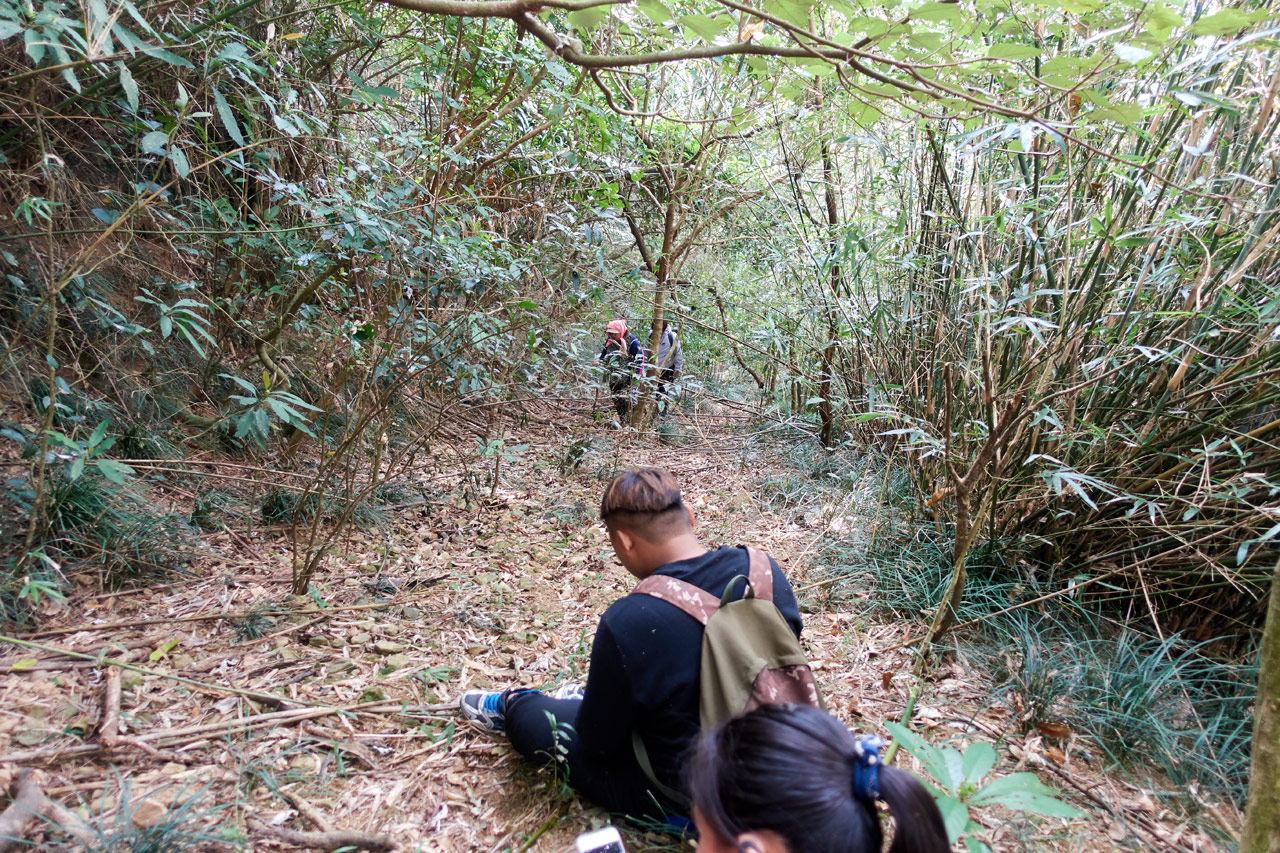 But at long last, we had arrived at Tjuqemadris!

Tjuqemadris’ final days came when the villagers were forced by the Japanese to move closer to the plains so they would be easier to control. This was an initiative carried out all over the island over many years. Just a few years prior, Tjuqemadris was under its own rule. Japanese soldiers had been trying to conquer Tjuqemadris and the surrounding villages for some time. But Lulji’s great-grandfather, drangadrang taraqaz was stubborn and refused to allow the Japanese to rule his tribe. One day he and some of his warriors attacked a nearby Japanese camp. He personally killed two soldiers and fled. drangadrang hid in a cave nearby Tjuqemadris while the soldiers searched for him. Three days later he was found and killed.

Lulji’s great-grandmother–only in her upper-teens at the time–was smuggled to a nearby village where she hid and per custom, never remarried.

A Return to Roots

Coming back to Tjuqemadris after learning its history felt like I was visiting it for the very first time – this visit had far more meaning.

From the road we needed to climb and crawl up the mountain to reach the remains of Lulji’s great-grandparents’ house. We had a crude map drawn by an archaeological survey some thirty years ago to help guide us. I roughly knew how to get there and set it upon myself to carve the way up to the house. It was tough due to an abundance of Formosan Rattan that were planted long ago to help defend the village from the Japanese soldiers. 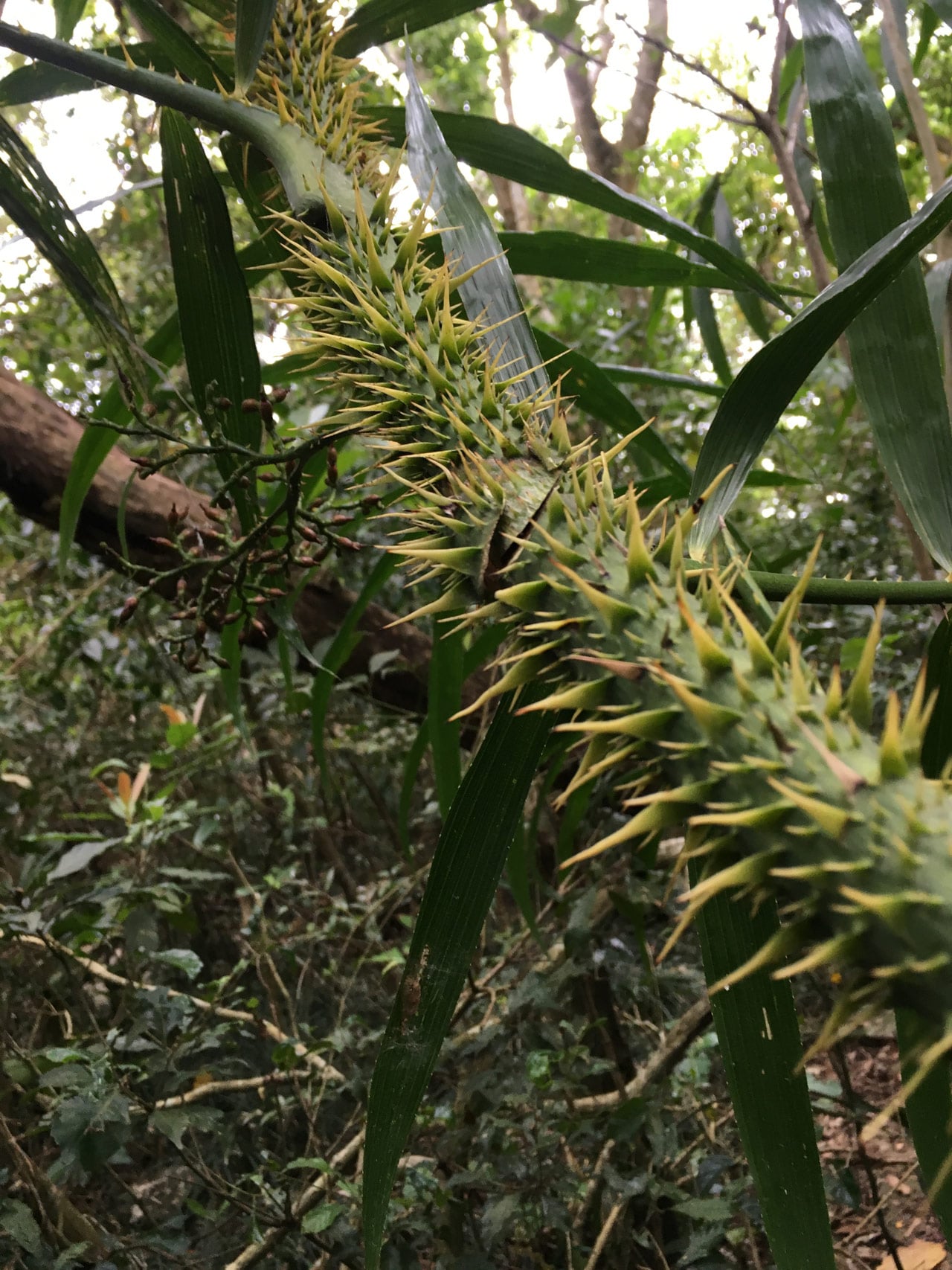 These plants are merciless! If the thick thorny parts aren’t bad enough, the little vines that sprout from them are difficult to notice until they grab a hold of your clothes and skin. Like a fishing hook, pulling at them only makes it worse. I’ve nearly had my eye taken by one!

When it was all said and done, we made it to our final destination without injury.

The first order of business was to start cooking a meal and prepare for the prayer. A prayer must be said to let the ancestors know who we are and why we are there. Also, to ask for their blessings and wisdom so that we may hike down the mountain safely. Lulji’s great-grandfather is in fact buried nearby in what used to be the main chamber of the house. It’s customary for Paiwan to bury their dead this way. 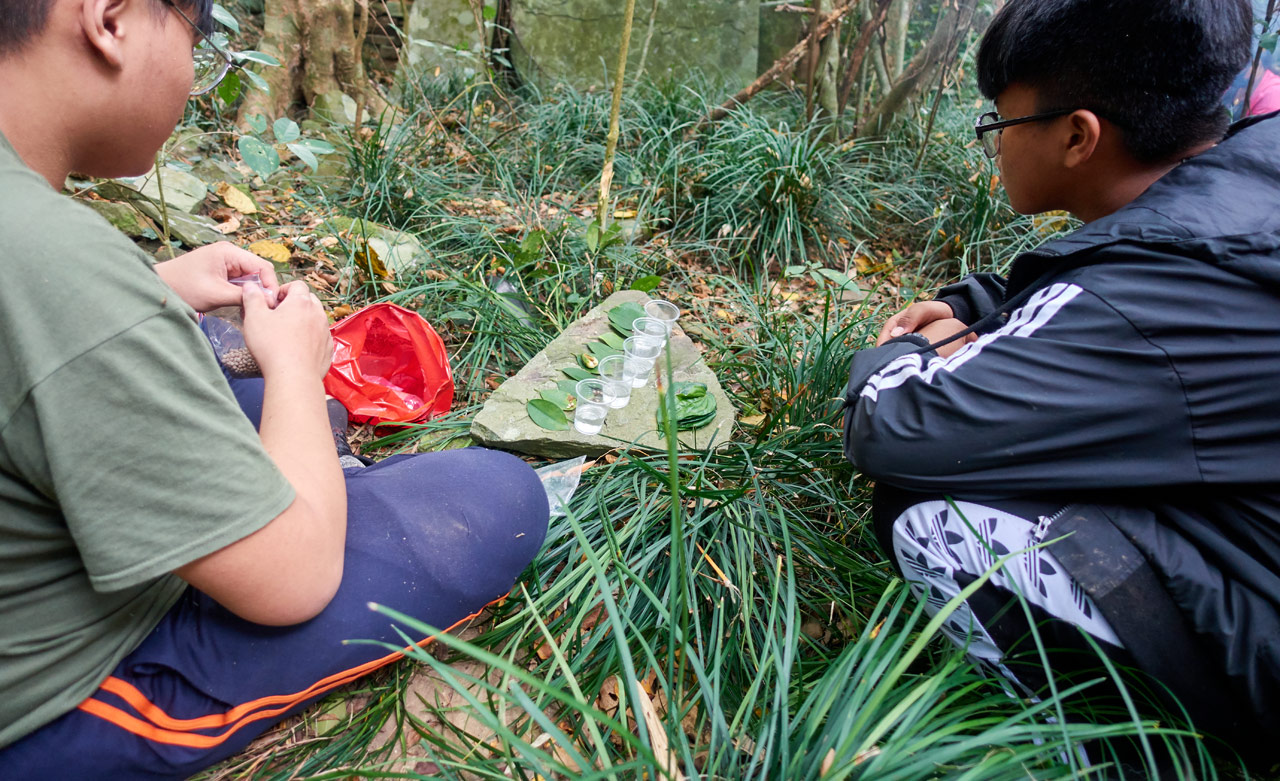 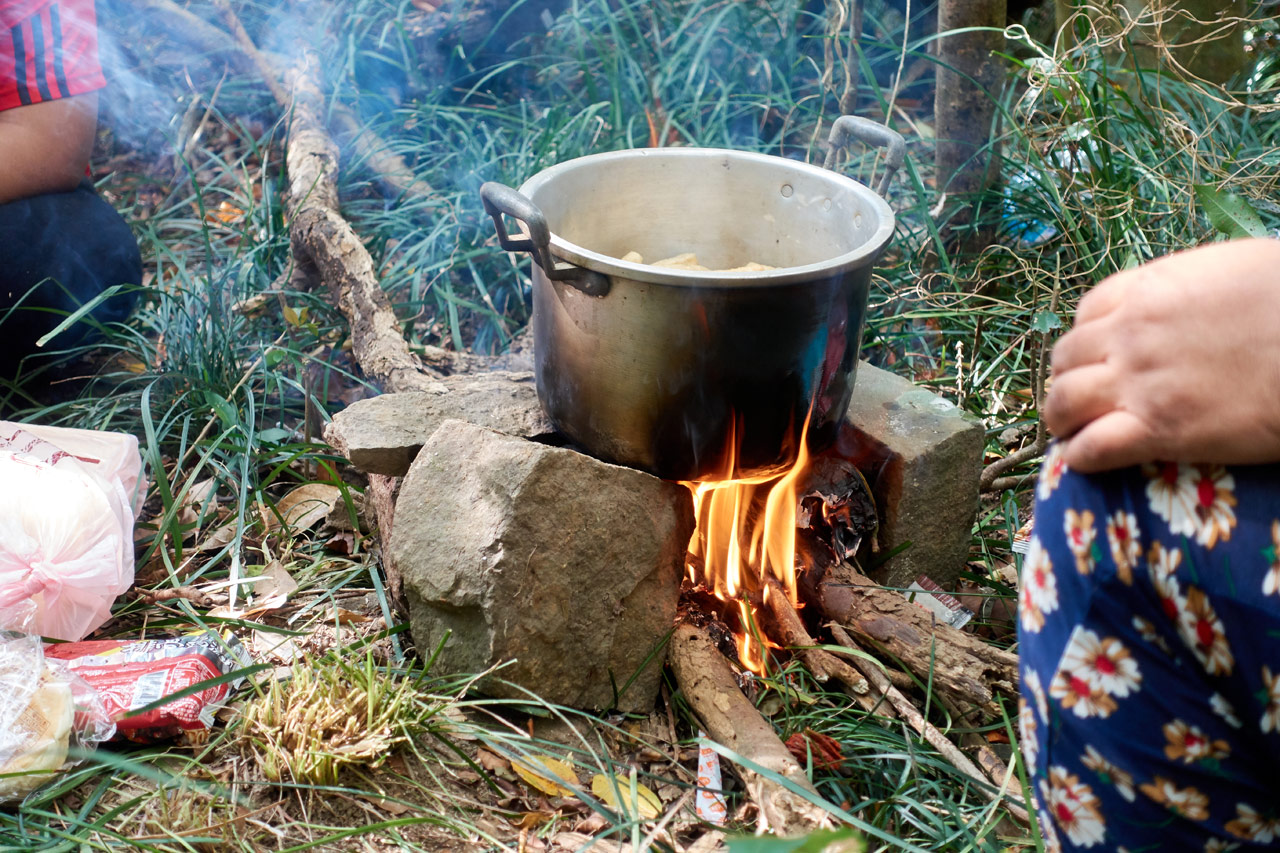 This part of Taiwan receives heavy rainfall and is considered a tropical rain forest. A fire here has little chance of spreading.

We ate and later Lulji’s mother began the ritual prayer in her native Paiwan tongue while we all stood by motionless. Afterwards, Lulji and I spent our time exploring what remained of the house and some other parts of the village. 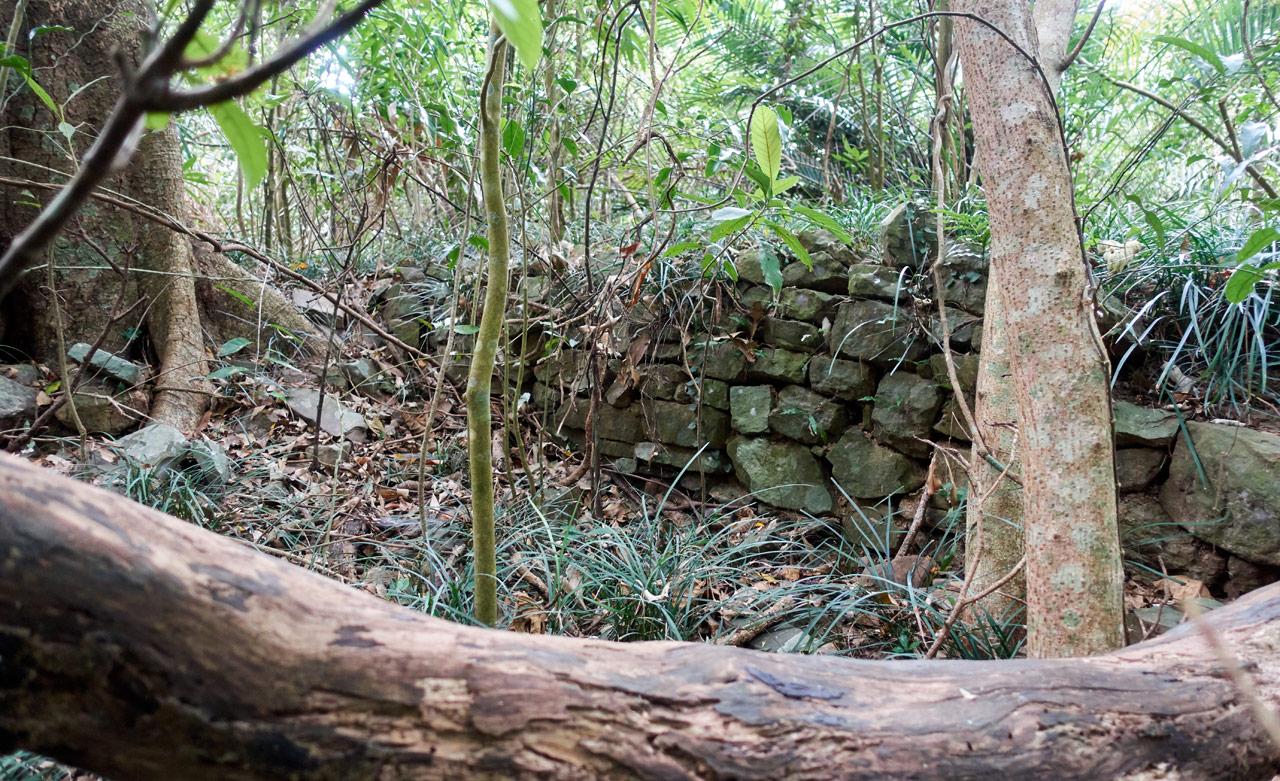 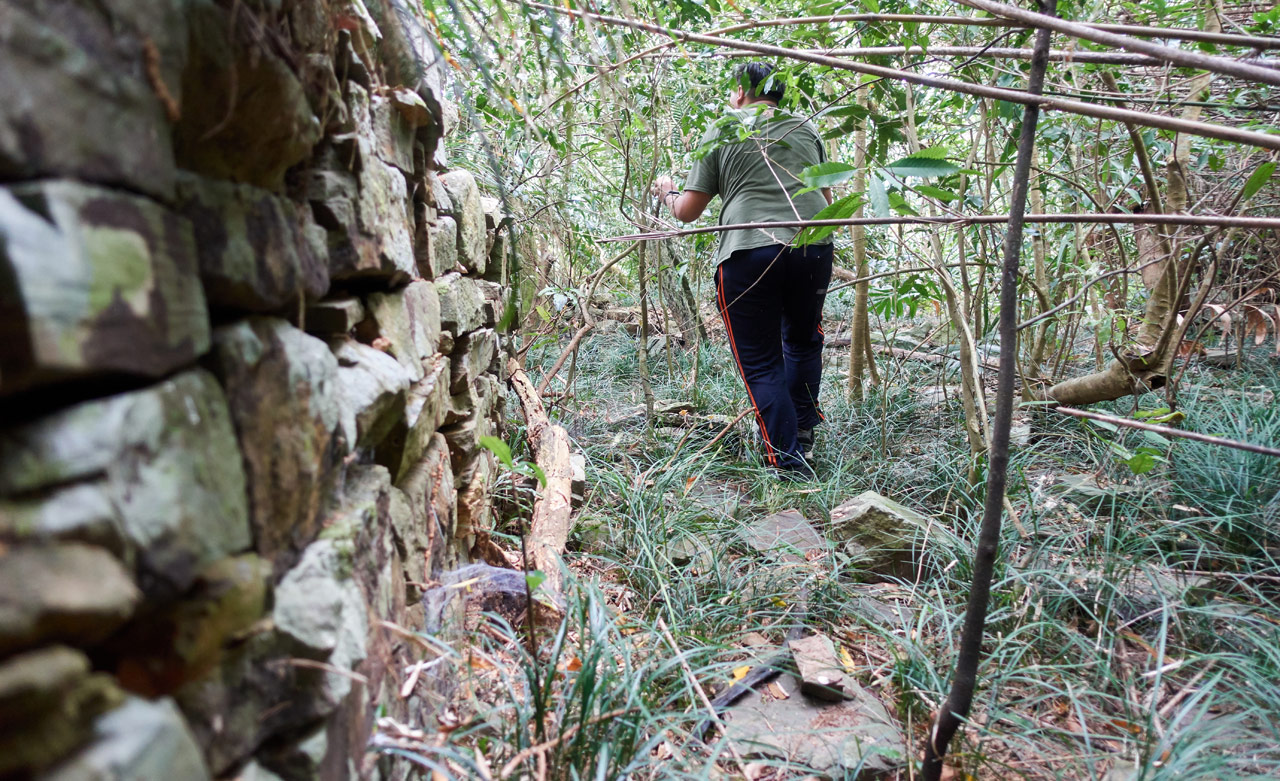 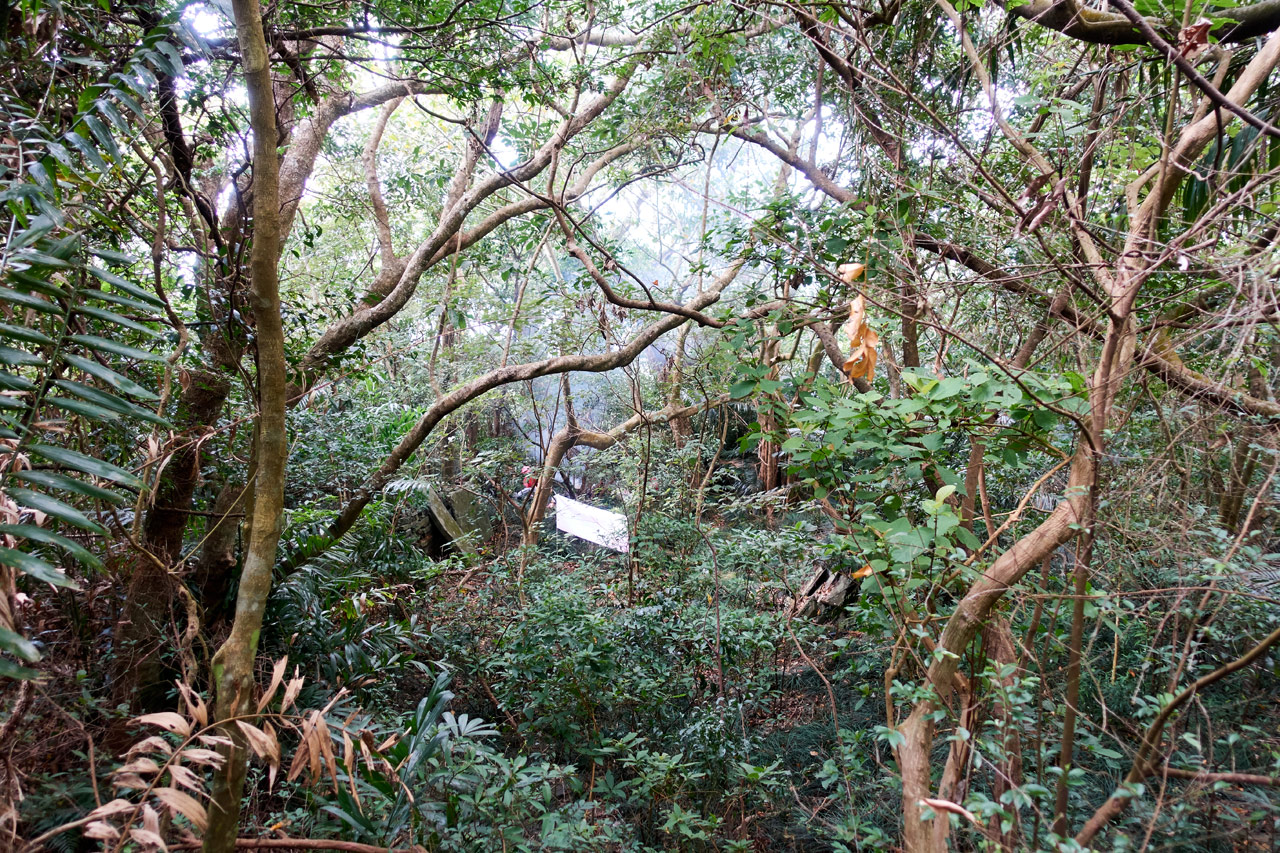 Here Lulji is posing next to a stone that used to be located at the entrance of the house. 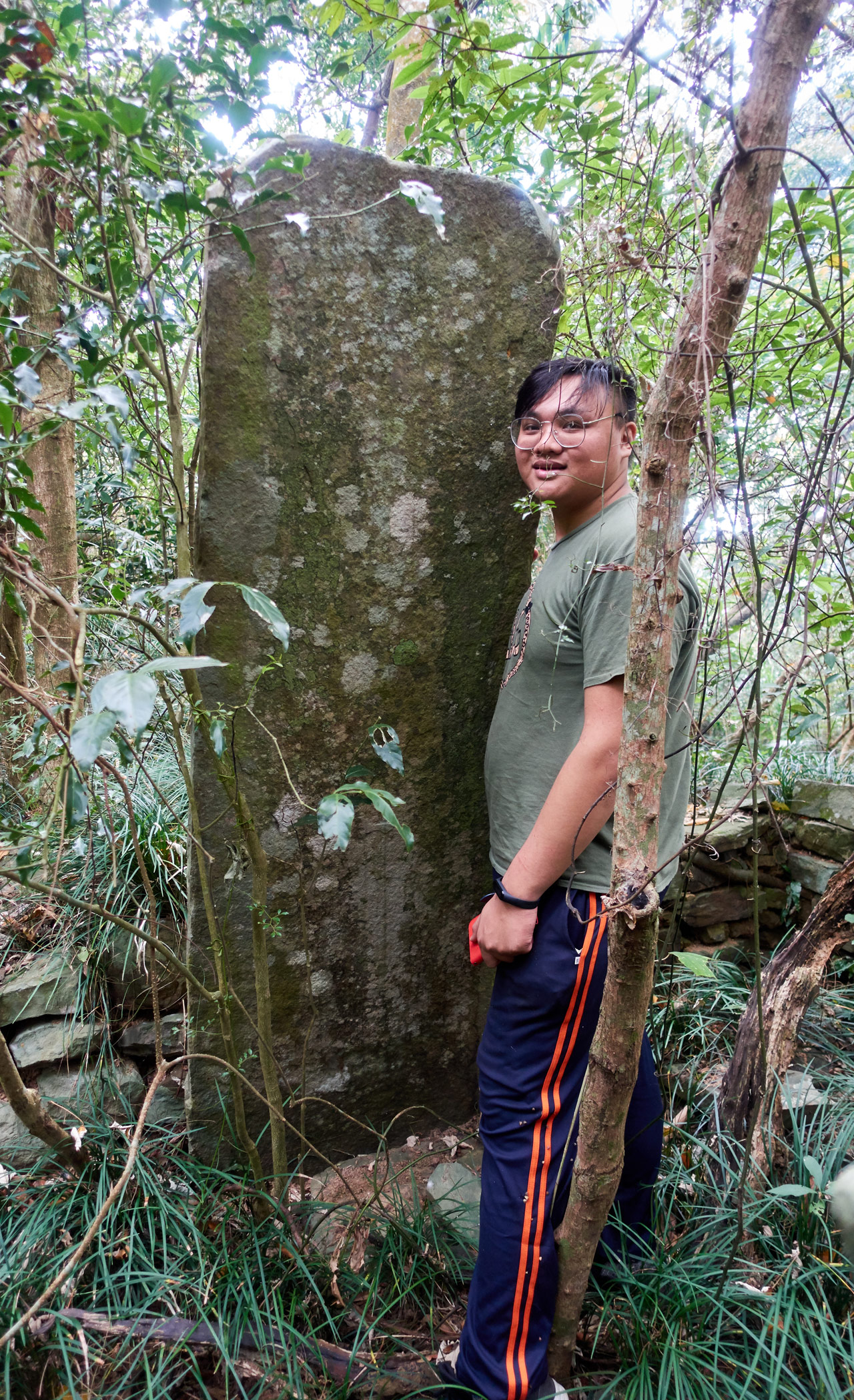 It’s difficult for me to comprehend how this land used to be quite open and free from most vegetation; and how the houses used to resemble something we might recognize, like this old picture of a Paiwan house built in the same style of those in Tjuqemadris.

As much as most of us would have liked to have stayed longer to explore more, the last thing I wanted was to be caught out there after dark. So at around three o’clock we decided it was time to head out. But not before one last picture. 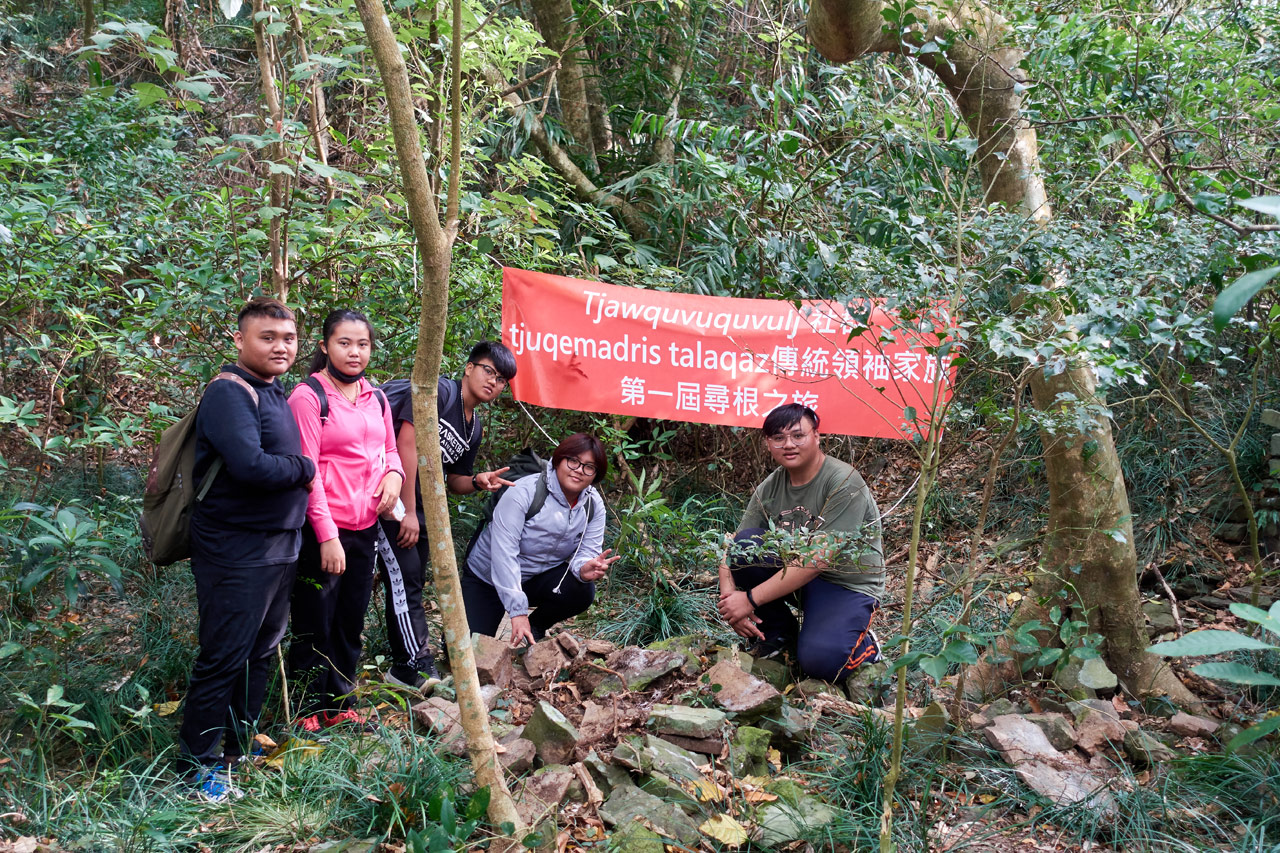 The journey back was mostly quiet as I think everyone was tired. We made it back to the stream without incident and took a short break. Later, some of us explored a little upstream. 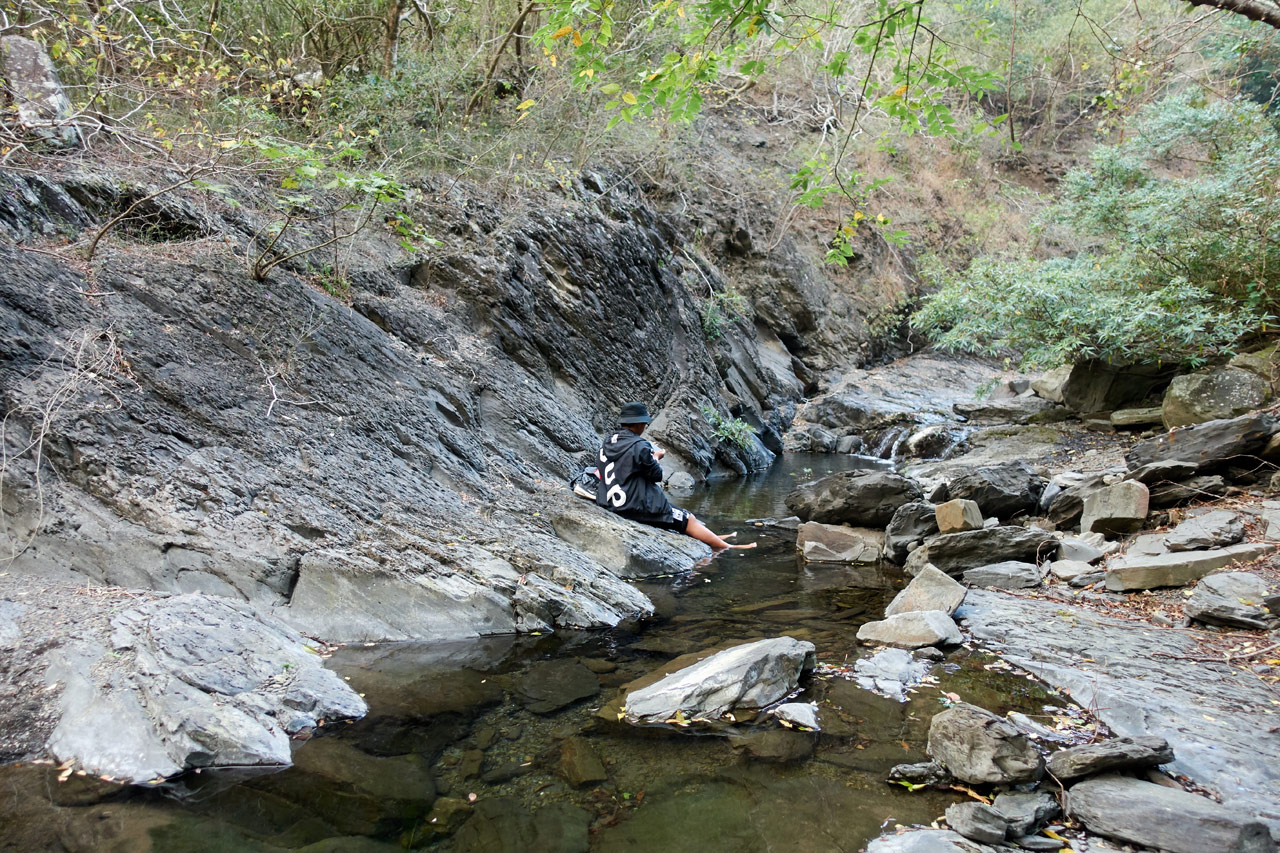 Looking back at that hike I feel honored to have led the group to reconnect with their past. Lulji and his mother had been looking forward to this trip for a long time. They said it helped them strengthen their sense of identity and foster a deeper understanding of their family’s history. Seeing the old village for the first time was a touching experience for all of them. I’m humbled to have been a part of that experience.

OutRecording @OutRecording
6
My creative 8yo son came up with this method of retrieving his Uber Eats. #SocialDistancing to the extreme? 😂 #Taiwan https://t.co/GCXV6mldjN