I was browsing some maps one day and noticed a peak named HuYaLuoShan East – 戶亞羅山東. I searched and found very little information about it. That really piqued my interest! What little I did find was too old to be completely accurate. So I did my homework, drew up a plan, and headed out one morning real early to see if I could make my own way to this seemingly unpopular peak.

Luckily for me there’s an established trail that passes the ridge this peak is located on. I was also familiar with this trail thanks to my hike to DaMuMuShan – 大母母山 over a year and a half earlier. All I would need to do is drive as far as a landslide, park, hike up several hundred meters to the ridge, then follow it down until I reached the peak. It would look something like this:

If the ridge was relatively easy to follow, then I didn’t think it would take all that long to hike. Unfortunately, my plans never seem to work out the way I hope. In this case, nature threw me a few curve balls.

My plan revolved around parking where I had parked when I had hiked to DaMuMuShan. But due to a landslide–which is a constant feature that had always been cleared on my previous trips–I had to park nearly two kilometers early.

Looking back at where I parked my motorcycle.

It sucked, but there was no point in complaining; it just added another forty-five minutes, give or take.

If you find yourself here for this hike or DaMuMuShan, this is a decent spot for some pictures.

That’s Wutai – 霧台 there on that mountain shelf. Here’s a closeup shot.

From the landslide you follow the old road, now overgrown.

This part is easy and relatively enjoyable. There’s some scenery along the way, but not a lot.

About forty minutes into the hike I discovered why nobody had bothered clearing the earlier landslide.

These are the only pictures I took of it. It’s totally unfixable. And since this road goes nowhere (there used to be farms out here, but they must have dwindled down to one, which was cut off by a huge landslide many years ago) and is only used by hunters and hikers…I guess that’s that.

It was sketchy trying to get through this landslide. It slowed me down a good deal. Hopefully someone has added a rope or two since my visit.

On a good note, there was nothing blocking the path the rest of the way to the larger landslide I had mentioned earlier.

When you reach that landslide, it’s a good opportunity to take more pictures.

This is around where I consider it to be the real beginning of the hike. After the landslide there’s an abandoned structure that must have been used by the people who farmed here.

There’s also some old structure nearby. If you’re looking for an old TV, you’ll find one there.

Somewhere after the farm area is the perfect place to get a good look at Wutai and all the mountains in the surrounding area.

Hiking from the farm to my target ridge only took twenty minutes. Now this is where things got fun. When I got there, what I found was (surprise, surprise) a whole lot of overgrowth. There was also a sort of “hump” I needed to either walk over or around. Of course, I didn’t take a picture of any of this. So use your imagination.

While making my way around the hump, I spotted something in the distance. I thought to myself, “No, it couldn’t be one of those,” but low and behold it WAS one of those.

And not just one…but more!

Now that changed things. It’s a mountain peak and I knew people must have hiked there in the past. But the lack of current information about this peak led me to believe it was somewhat abandoned by the hiking community. These trail ribbons gave me hope that I wouldn’t have a downhill bushwhacking battle the entire way. Though they did look kind of old. So who knows?

I had my hopes up until a measly ten minutes later. What I found gave me pause.

Seeing a rope at first made me happy. Hey, people must use it! But then seeing the condition of it took the wind out of my sails. I think the rope itself was good enough, but what was used as footing was sketchy as fuck.

Here’s a sideways picture of what was used. Remember, it wasn’t vertical. It’s just the angle of the picture.

I lightly tested that tree branch and wasn’t satisfied. I couldn’t see how any of that was going to hold me up. The penalty for falling wouldn’t be death, but I’d surely hurt myself. So what to do?

Going around it to the left was impossible. But it seemed like I could make my way round the right side. So I tried.

This picture is looking down. It was steep enough to warrant a rope. Also, the ground was quite ‘crumbly’ under my feet. I knew coming back up would be a challenge (and believe me, it was!), but that was for future Glenn to worry about. So I pressed on.

It started off not so bad, but then things turned for the worse. This part of the hike was by far the most dangerous and also why I have no pictures of it. How can you think of taking pictures when you’re one poorly placed step away from falling to your death?

I made my way down and then back up to the ridge where it connected back to the original trail. If you decide to hike this, all I can say is to bring some rope, be prepared, and stay safe. This is no place for the casual hiker.

Here’s a look at my path.

The top of the red line is where that sketchy rope and tree branch section is located. As you can see, I made my way around and back up. It works, but isn’t pleasant.

Once I got back on to the ridge, the view to both sides opened up.

That is, if you don’t count the overcast sky. It seemed the visibility wouldn’t be getting much better. But at least it wasn’t foggy.

So onward I went! Or in this case, downward.

Maybe you noticed that old trail ribbon attached to the tree there, blowing in the wind?

Once I made it down from here the trail became your typical ridge-like trail.

It was a little thick in places, but not so bad that I needed to use the machete.

One theme you’ll notice on this ridge hike is the abundance of photo opportunities.

But it’s all of the same landscape, just at slightly different angles. So to keep you from getting bored of seeing all the same shot, I played around with the mood of the above picture. 🙂

The trail was occasionally marked by those old trail ribbons; marked well enough to find the way at least.

You see a ton of PVC water pipes in the mountains, but I can’t recall that I’ve ever found a metal pipe. This got me a little excited because I hadn’t realized there had been farming activity in this area. None of the old maps I had looked at showed any roads or activity of any kind here. And this pipe being metal could indicate this it has some age to it? Why use metal when you could use PVC, right?

So I fully expected to see more pipes and possibly some roads. And I wasn’t disappointed.

…I found plenty more pipes. But this time all PVC.

Any hey! Did you notice that yellow ribbon? It doesn’t look old at all.

I wonder when they came through here?

So I found PVC pipes and more trail ribbons…but what about those old roads I had predicted? Oh yeah, here!

This was the only picture I took, but I assure you it used to be a road at one point. And boy did I want to follow it down to see where it went or where it came from and why it was here. But that would be a mystery for future Glenn to solve.

The entire hike down the ridge only took me one and a half hours. It probably would have taken an hour tops if I didn’t have that little alternate route in the beginning and hadn’t stopped for so many pictures. Heck, it took me all of one and a half hours to hike back UP the ridge.

Anyway, I continued on…

And that’s when I found out who likely built that rickety rope/tree branch crossing at the top.

But this hunter’s camp seems to have been abandoned.

I’ll be honest, I was fully expecting to find a body under that tarp. But all I found were all those old supplies and trap making materials. If you’re in need of some camping supplies while headed up to DaMuMuShan, why not take a detour and pick up this stuff? *LOL*

Back to the Hike

I wasn’t far from the peak now. For all I knew and hoped, it would be a nice little walk along the ridge until I got there. But that wasn’t going to be the case. It was quite the opposite really.

Due to some natural obstacles, the trail veered off to the left and down. The ridge became higher and higher up. I followed a trail and some trail ribbons, but at some point I didn’t see them anymore. I walked around for a bit, back and forth, trying to find the best route up (that’s where I had assumed I needed to go from here) but didn’t find anything that looked easy. So I said fuck it, and made my own way.

This was the only picture I took here. The ground was the type where you take one step up and slide two steps back. And it was steep; much steeper than that picture conveys.

It took some doing and it wasn’t really safe, but I finally made it up. And at some point I found a trail ribbon and the trail. Or maybe that was on the way back down? I forget.

Anyway, I was back on the ridge!

You can see the trig stone hidden in the grass there.

And no trip report would be complete without my peak pic.

There wasn’t much of a view from the peak, but you could see HuYaLuoShan – 戶亞羅山.

All the Rest After My Rest

Hiking downhill wasn’t all that tiring, so I only took a thirty minute rest before heading back. Nothing of note happened on this part of the hike. I made it to my bike in one piece and all in all it had been a pretty good hike. I’d definitely recommend this hike for any part-time adventurers out there. 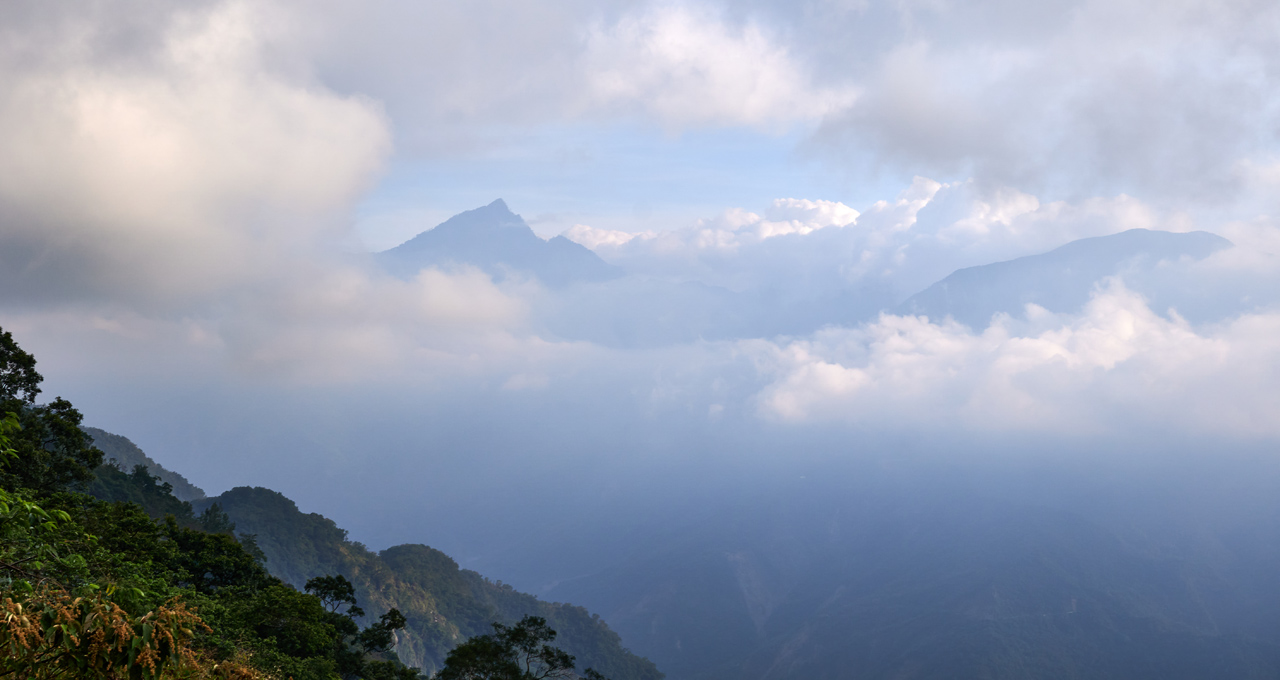 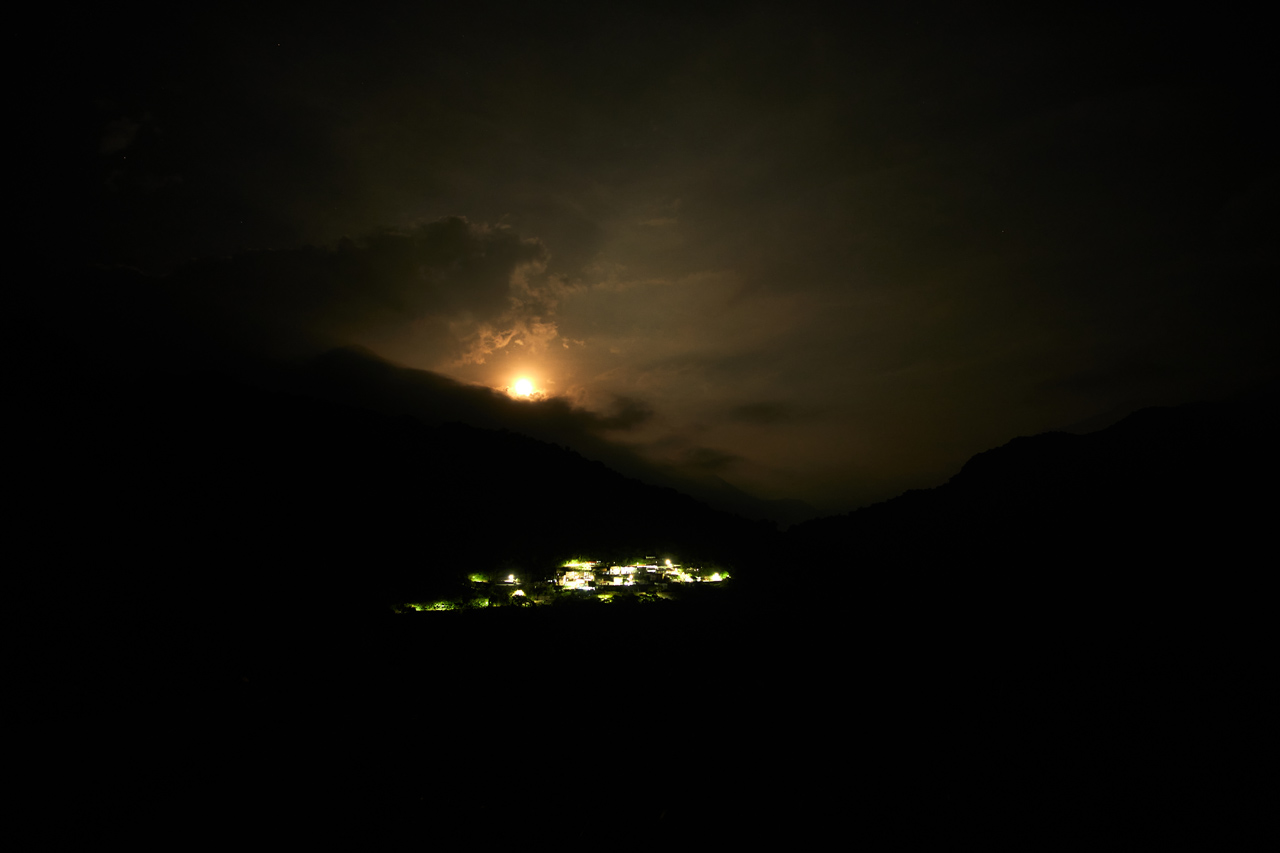