ShiMenShan (Also known as ShiMuShan – 虱母山 or 蝨母山) is located in Mudan township 牡丹鄉 in Pingtung County. Despite only being 384 meters in height and taking about one hour to hike, I highly recommend you consider this interesting little peak.

I’ll admit, ShiMenShan wasn’t on the menu the day I decided to climb it. In fact, it wasn’t on my radar at all. My original plan was to ride and hike to 牡丹路山 MuDanLuShan and another nearby peak. But the road conditions on the way to the peak made me turn back and reconsider my options for that day. I wasted a good amount of time and had a fall, but it wasn’t for nothing. The weather was great and the area offered some decent scenery.

My “Plan B” was out of the question because of the wasted time. So I searched for a nearby peak that I was sure wouldn’t take too long. ShiMenShan was on the other side of this mountain range, but it didn’t appear that it would take long to hike. ShiMenShan it is!

The GPX track I found showed a loop. The hikers went up the main trail to the peak, cut over to some point of interest, and then hiked down a trail to the main road and back to the beginning. When I arrived at the main entrance to ShiMenShan the parking lot was empty. Plenty of cars were driving by, which made me a slight bit worried. I don’t really worry about theft here, but a part of me will never feel comfortable leaving my bike in an open area where anyone can easily steal something off my bike, like my tools. So I drove to the other trail to see what it looked like.

There was a newly cleared dirt road that headed up the mountain. This made me feel a lot more comfortable, so I dismounted and prepared my gear.

I hiked up the dirt road. It was hot out and the hike was boring. I’m thankful it was recently cleared of all overgrowth; it would have been a miserable hike to the top trying to navigate through tall grass in all that sun. I was beginning to wonder if I should have hiked up the other side first. But it was too late to reconsider my choice, and anyway…there were some decent views along the way.

I also found an apparent suicide, or sacrifice, or just plain bad luck about halfway up. 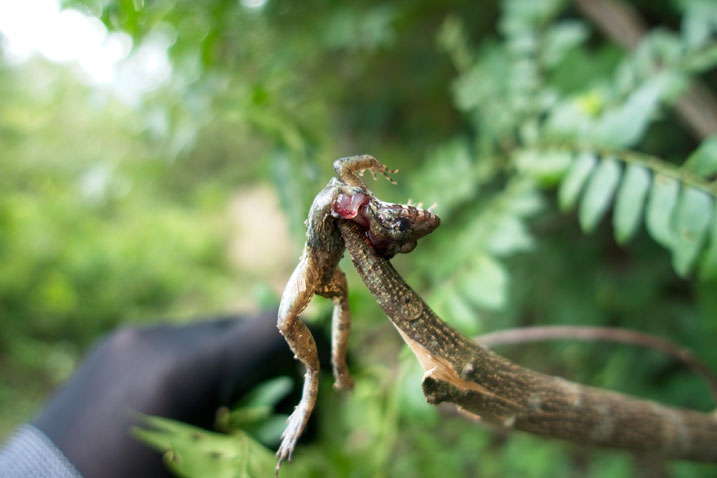 At this point in the hike I had no idea what the point of interest was at the top. I figured it was some kind of repeater station or whatever random large antenna you find at the top of mountains. I discovered I was correct as I neared the top. That was one of my objectives! 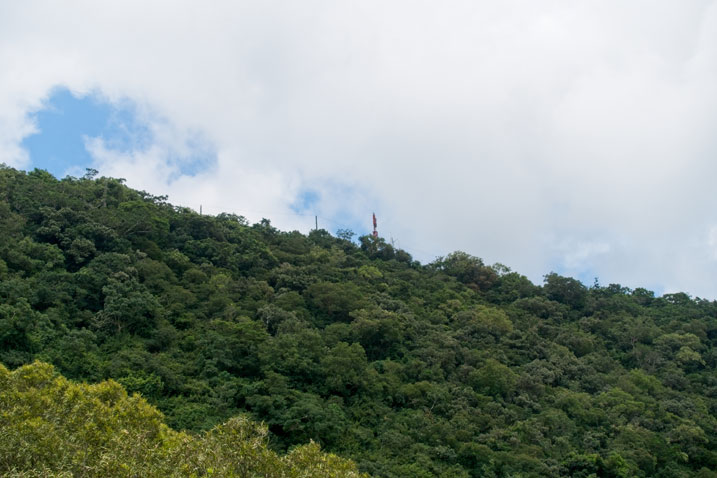 There was one last nice view before I came to a somewhat-cut grassy path to the top.

It took me about an hour to reach the rain gauge station. If you don’t stop to take pictures, I suspect it would take about 45 minutes.

At the top you will first see a large antenna atop a concrete structure.

Later I read on the below map that it’s a transmission station.

The gate was open to the transmission station and there was a structure next to it, but I didn’t go inside.

Off to the back of the area was the rain gauge station.

Either they’re in the process of fixing the fence around the station or this was a project that never got finished. On the large pole to the left was a sign that said something like “video monitoring”. But there were no cameras at all. The only thing to keep you from having your way with the rain gauge station was this sign. 🙂

I took a little rest and then searched for the trail to the ShiMenShan peak. But this presented a problem. Around the side of the transmission station was what I thought was the trail.

I followed it around back and found nothing. It led exactly nowhere. So after consulting my GPX track I found that the trail was back a short way from where I came. That seemed odd because I didn’t remember seeing any trails while coming up.

It took me a few minutes of walking back and forth, but eventually I found the trail. And I can’t even call it a trail. At best, it was just a place where people jump up into the trees and overgrowth beyond.

Yes, there IS a trail just beyond this area.

Once inside under the canopy (which was great btw…no more sun!!!) it became dense, but navigable for the most part.

There were some spots that weren’t as easy to navigate, but for the most part you could figure out where the trail was.

I only saw one ribbon along the way though. It was comforting to know that I was on the right path.

It took less than 20 minutes to reach the peak.

The area was kind of overgrown and felt neglected.

There was a view to the West, but it wasn’t particularly special. It wasn’t terrible. But I had to step up on a stone to get this shot.

As usual, I took a break and had some food. Later I took my usual peak picture and searched around for anything else of interest.

After a decent amount of rest while listening to my bluetooth speaker, I set off down the mountain on the main trail. Something immediately became apparent on the way down: it was WAAAAAAAAAY more interesting than the road/trail up. It was steeper and more technical. (well duh! I came up on a road) But it was a really cool trail. There are vine-like trees along the entirety of the trail.

I’m no tree expert, but banyan tree comes to mind. Perhaps they were, or not. But whatever they are, they help set a cool scene while hiking.

Every one hundred meters along the trail was a marker to let you know how far you’ve come.

Some were in better shape than others.

I’m not going to go step by step with this description. I’ll just cover some of the highlights. This is one trail you should discover for yourself.

There are seating areas from time to time like this.

The old benches they just threw down the side of the mountain. This was a common scene throughout the middle of the trail.

There were many places that required ropes.

Personally I didn’t think the trail was very dangerous, but I think many people would disagree with me. I certainly wouldn’t bring a child on this trail. But any able-bodied adult should have no problem negotiating this hike.

Halfway down I decided I was happy that I didn’t take this route to the top. It’s short, but I’d say a heck of a leg burner. 🙂

One thing this side doesn’t have that the other side offered was nice views. There were only two places with a view. One near the top:

And another about halfway at this observation deck.

There was this stamping device nearby, but there was no ink or anything to stamp.

The observation deck was nice but again, for me the trees were really the highlight of this hike.

Getting towards the bottom, the trail becomes more civilized.

There were also some signs along the trail, but unless you can read Chinese they won’t be very helpful.

That’s about all I can write about the main trail to ShiMenShan. It’s a short hike, but really good.

Between the ShiMenShan parking lot and the trail is an open area with a visitor’s center.

There are various signs posted telling you about the area.

I had a quick look inside the visitor’s center, but it appeared abandoned. Maybe someone is stationed there on the weekends.

After looking at all there was to see I walked down to the parking lot.

A map of the area can be seen along the way.

The parking lot is grass and there are plenty of aboriginal style artworks to see.

This area is also where they chose to put the entrance of Mudan village.

Also of note is the river next to the road.

Another point of interest in the area that I did not visit is the Shihmen Ancient Battlefield Shrine. If you have time it might be worth a visit.

From here I walked along the road and back to my bike. All in all it was an easy hike, but one I would enjoy doing again. I can’t say that about many hikes.