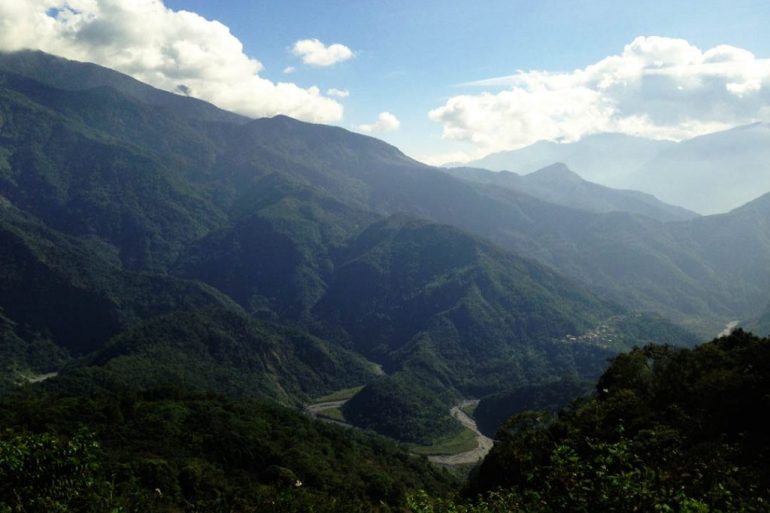 This is the second half of the Shaxi Lindau trail. It takes you nearly 15 kilometers into the desolate mountains with not a soul to see. In full, the whole Shaxi Lindau trail starting from the 185 comes in at just over 31 kilometers. That’s 62 kilometers there and back. A great day’s ride! By far one of my favorites.

This ride starts at the a “chain gate” here 22.816692,120.6772326. The second time I rode to this point I saw a few mountain bikers exiting around the pole on the right. It was late in the day so I planned to give it a try the next time I came out. A smaller motorcycle can make it around no problem. I’m not sure about a larger one – perhaps with some help.

Just beyond the gate is a guard shack. The last several times I went it was locked up tight. The door appears to be riddled with gun shots from the INSIDE. Makes my mind wonder what happened there and why there is no longer a guard there…

One time I went there was a construction crew several kilometers in. I thought they would tell me to go back, but instead invited me to eat with them. 🙂

Beyond that was just pure riding. Mostly double track. Nothing technical, so you can practice maneuvering at higher speeds. There’s always the worry that another rider or truck will be waiting around the next corner, so consider that. Though I only saw others on the first half of the trail…not after the guard shack.

That last kilometer or two becomes a little hairier, down to single track, but not so bad. The trail ends prematurely at a landslide – another victim of a typhoon I’m sure. It’s really too bad. Looks like there’s a lot more trail beyond that. 🙁  Those road crews were fixing stuff, and that gives me hope they may want to fix the trail beyond this point…but only a little hope. It also looked like they were doing a lot with the trees on either side of the trail. Whatever it is, I’m happy work is being put into it.