ShiKeJianShan 石可見山 is a peak located behind Laochijia Village 七佳村. I had always thought you needed permission to hike there. But a facebook friend recently completed the hike and told me permission wasn’t necessary. As you can imagine, it was immediately bumped to the top of my list.

Why? Simple. It has GREAT views! I don’t usually pick my hikes based on the views; but if it has something nice to see then all the better.

The last time I was up in the Laochijia area, there was a gate blocking the way near the entrance just past the Laochijia suspension bridge.

I had (wrongly) assumed it was a permanent fixture. Laochijia Village is a traditional Paiwan village that consists of nearly 50 slate structures. The government has been trying to make it a World Heritage site. It’s no wonder they wouldn’t want random people back there. However, as it stands now the gate is gone and you can drive all the way up near the village where another gate blocks entrance to the village itself.

Near the new gate sits a sign displaying the layout of the village.

There’s a trail heading up that ends shortly at another gate.

It’s a shame because I could have driven all the way up to the ridge and saved myself a lot of time. So I parked nearby…

…and began my hike.

It’s probably a good thing the gate was there. If I was on my motorcycle, I may not have stopped to enjoy the views. And they were plentiful!

The entire trail to the ridge was well trodden with mountain views around every turn.

As I neared the final curve that would take me to the ridge, I got my first look at what was ahead of me, as well as a little surprise.

ShiKeJianShan is up there somewhere. But a thick layer of clouds has enveloped most of it. It seemed that my great views would be ending soon.

As for the surprise, there was a nice spot overlooking the river below. When I walked out to take a picture, I nearly tripped over this thing.

It was completely covered in overgrowth, so I cleared enough of it so any passers-by could see it. This is the first time I’ve seen a survey marker that looked like this. 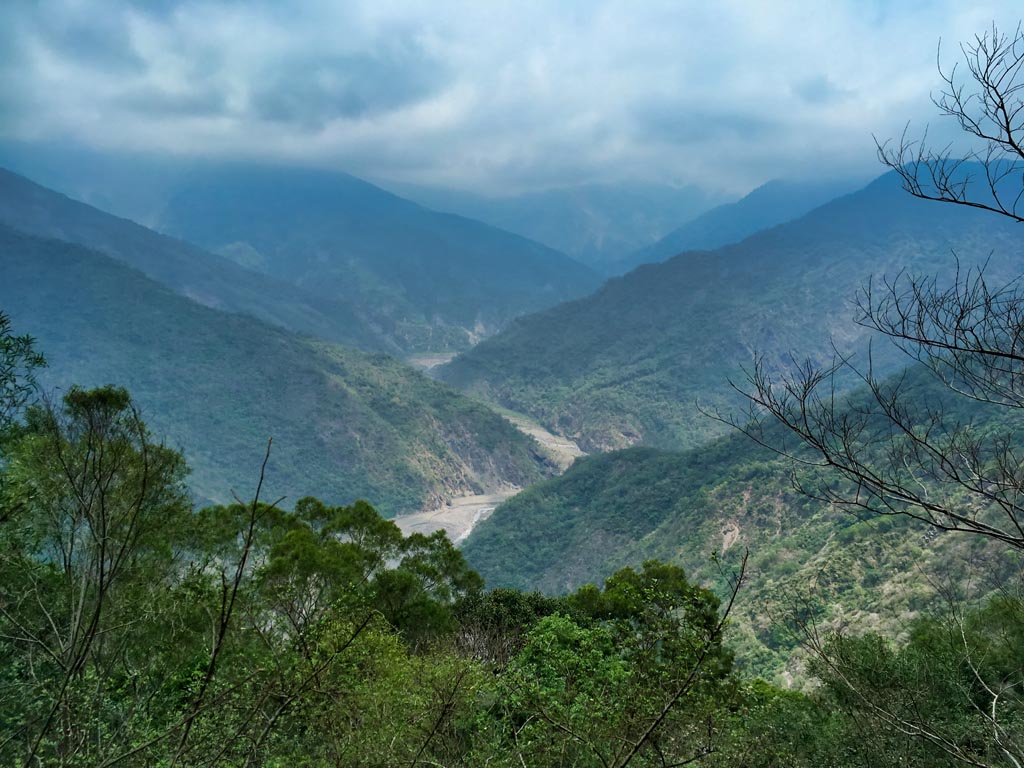 I was nearing the cloud layer and everything seemed to be a little hazy. You can make out QiJiaXiaShan 七佳溪山 down there that I tried to hike a few months ago. Straight out and a little to the left is DaWuCang 大武藏山.

Everything was looking good as I turned the corner and officially made it to the ridge. 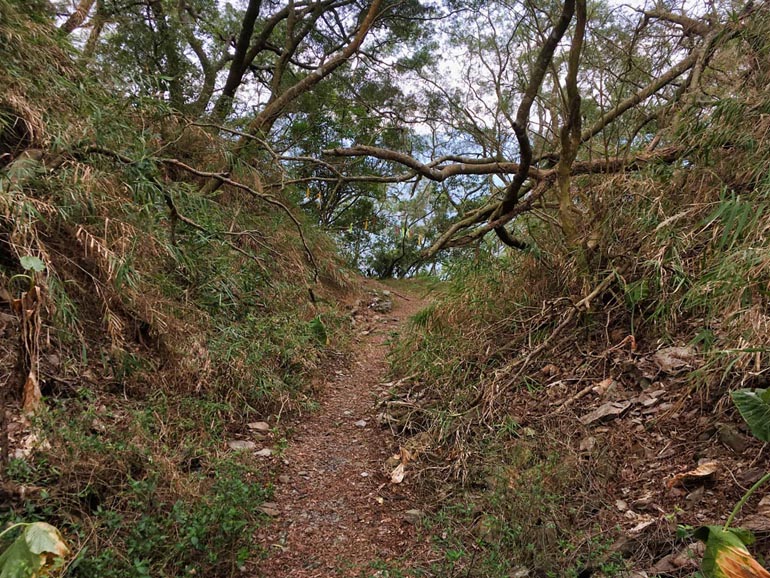 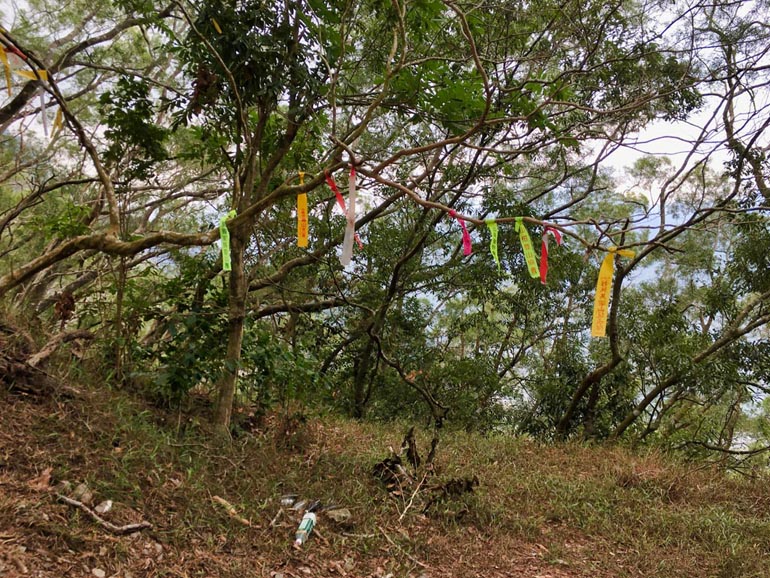 From here I could turn right, which leads to ZhuoDiLuoLiuShan 著地螺留山…or turn left up to ShiKeJianShan. My plan was to go to the main peak first and then try this other peak if I had enough time. As things turned out, time wasn’t something that was on my side…

Up to this point, the hike was very easy. And at first it seemed it would continue that way. 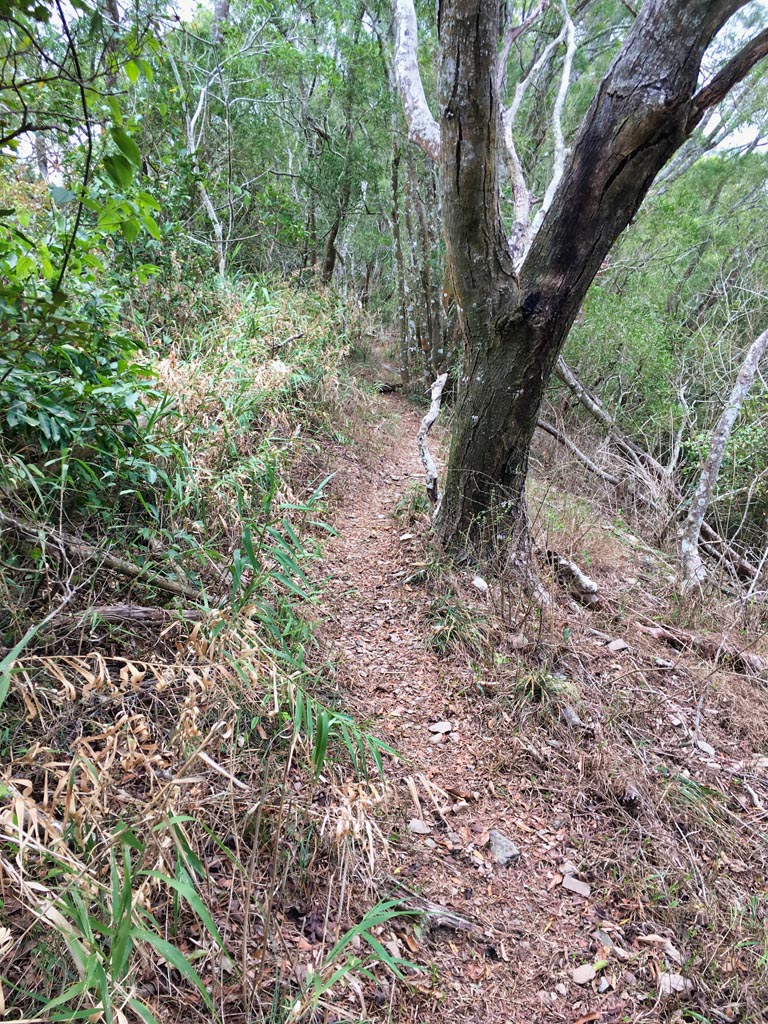 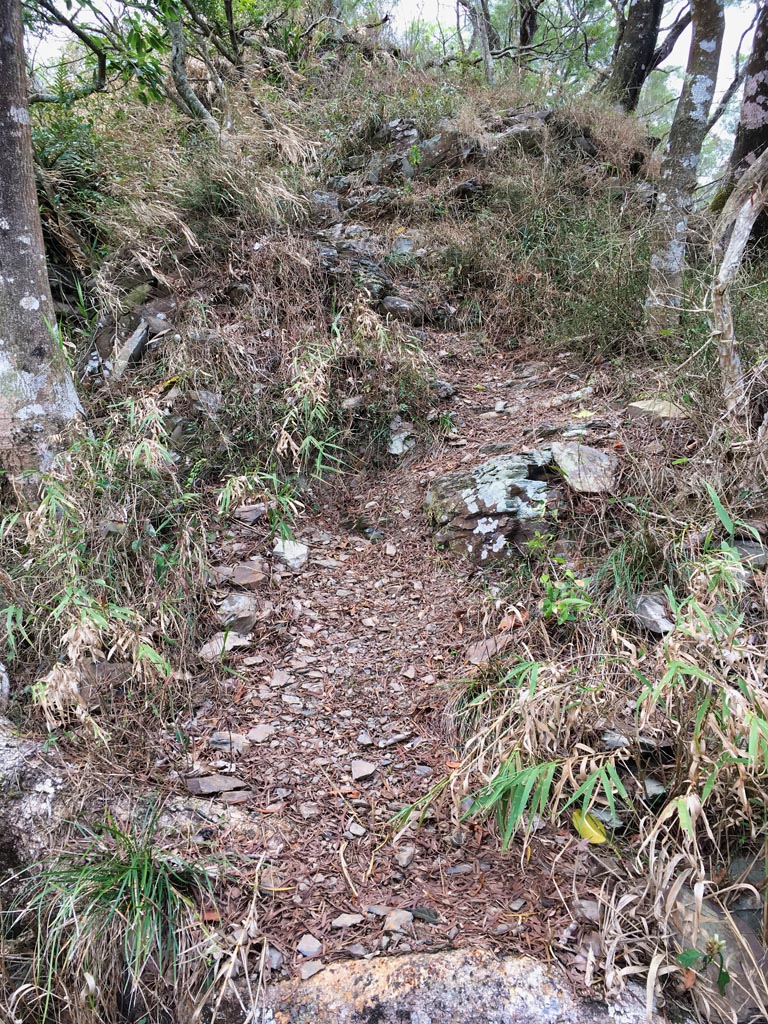 It was kind of a trick. The hike lures you into a false sense of security, and then BAM! It hits you with a steep climb most of the rest of the way.

It’s not like I wasn’t expecting it. And being on a ridge, the views were great. But…they all looked the same as before…just a bit higher. 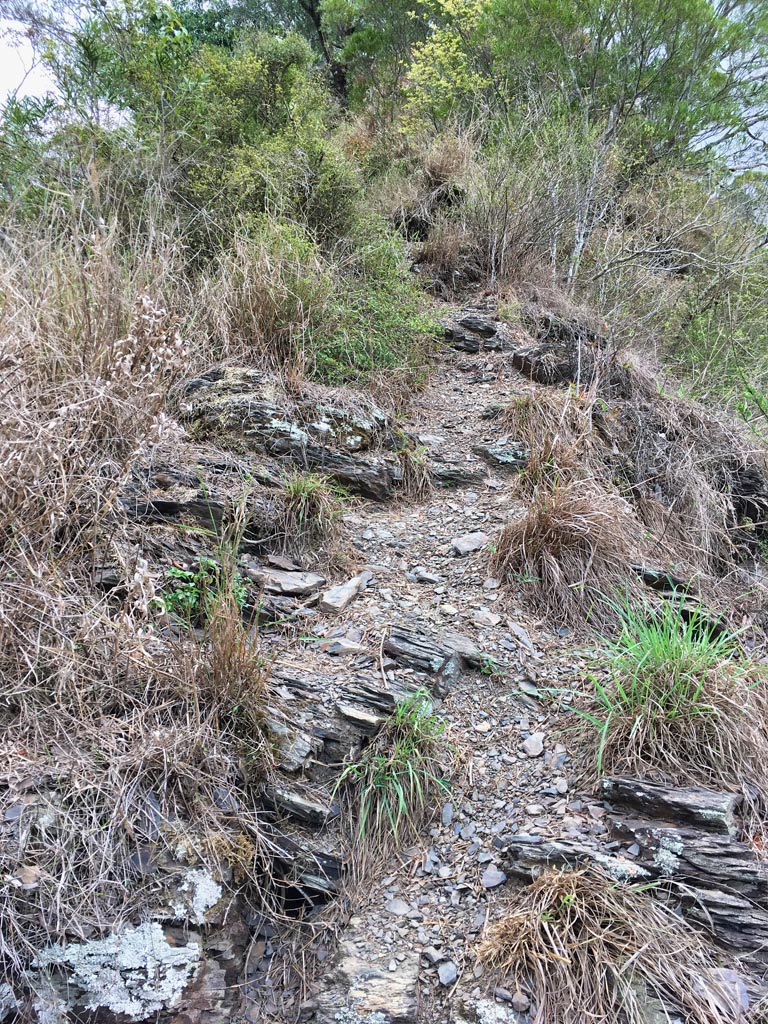 I noticed another one of those survey markers off to the side. 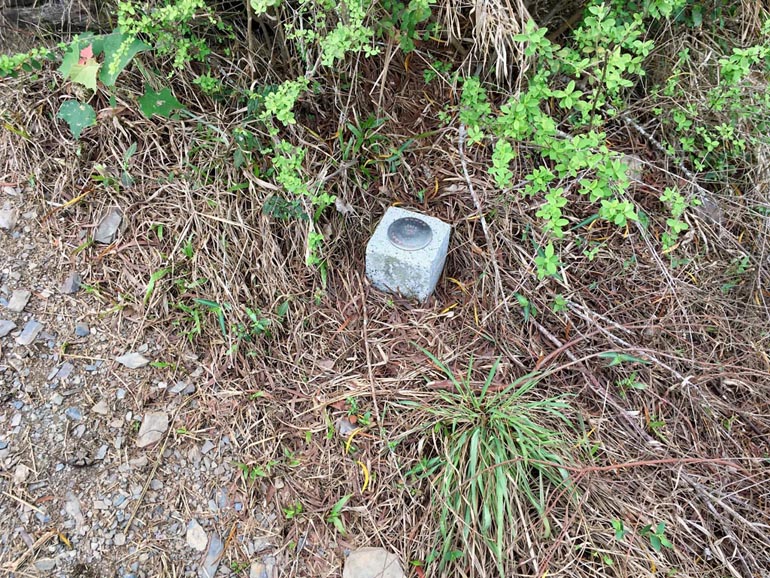 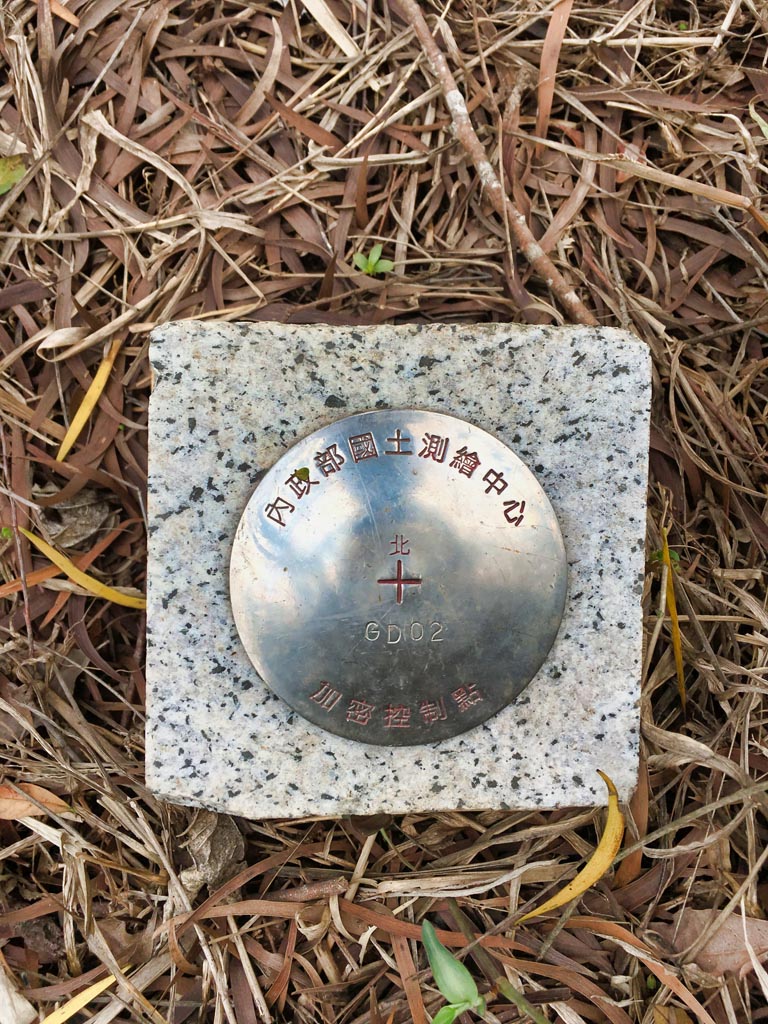 From the top of that little climb I could get a decent view of what was behind me. 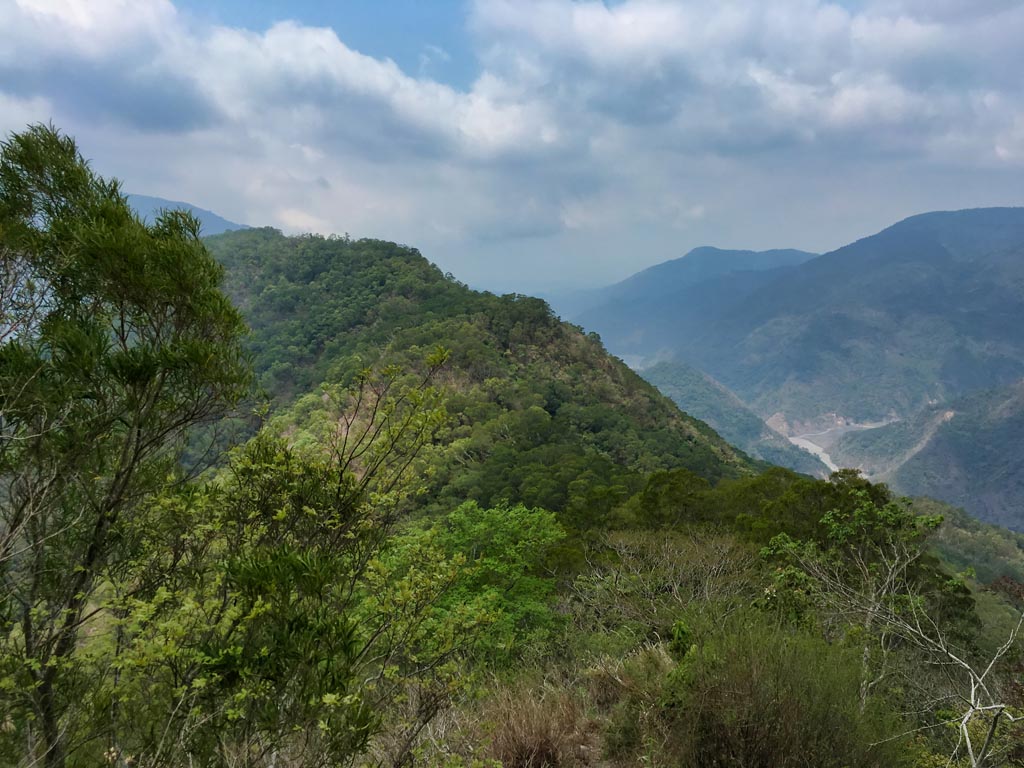 Continuing on, it finally got steep enough to require a rope. 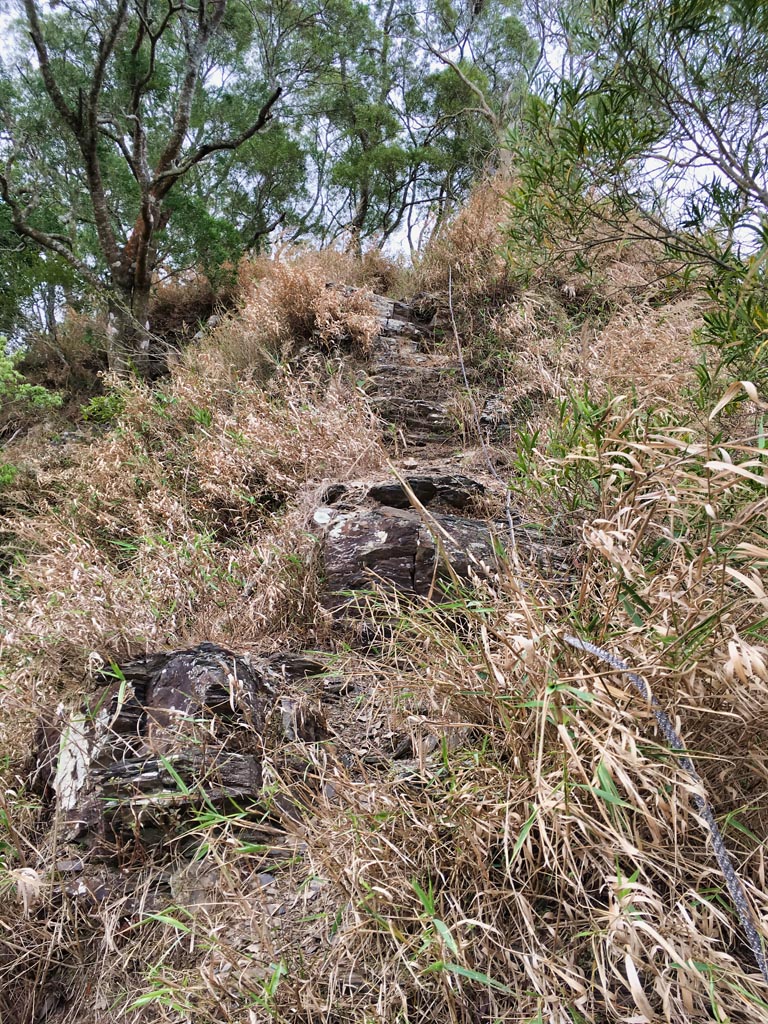 The top of this climb offered a perfect view of Laochijia Village below. 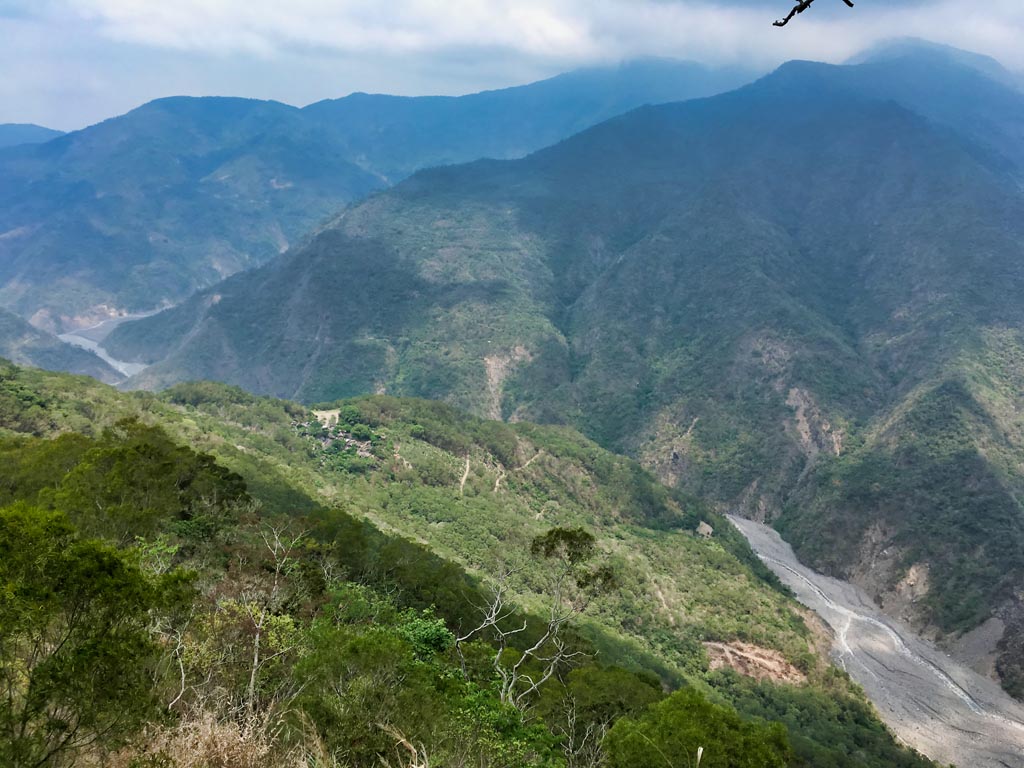 One thing I didn’t know was that there would be a lower peak about five minutes from this spot. I saw something marked on my GPX track, but had no clue what it was. As I climbed up, I quickly learned. 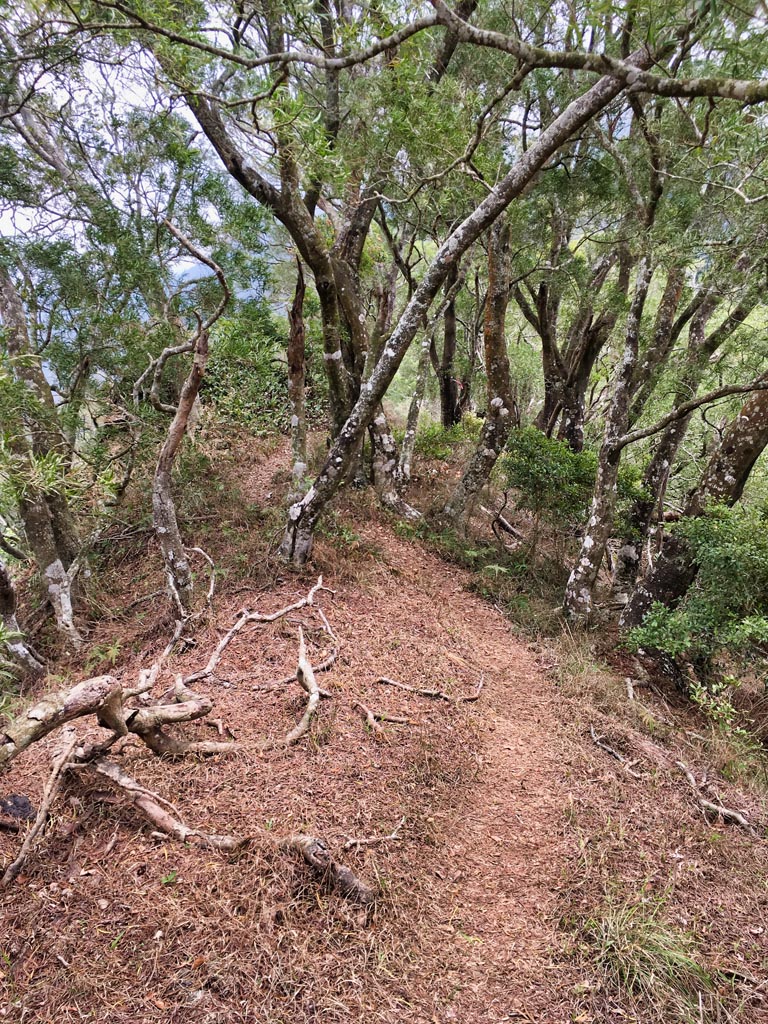 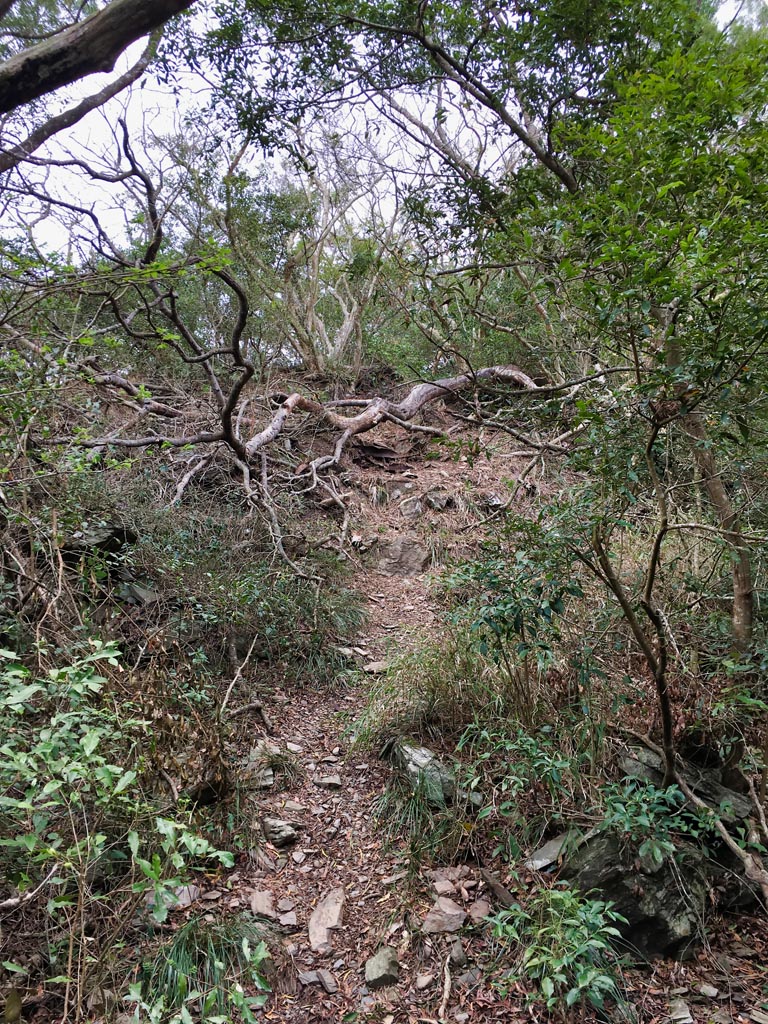 I was about two thirds of the way to the top and a bit tired by now. I briefly considered stopping here and calling it a day, but there was no way I could do that. I needed to push forward and finish this hike. I took some more pics of the area and continued back up.

One thing I would do if you stop at this lower peak, is to not go back down the way you came up to it. You can exit from the back of this area. The trail below bypasses the peak rather than going through it. I didn’t realize that at the time and wasted a little time and energy.

About twenty minutes from here I finally reached the wall of clouds.

It was getting windier as I came to an exposed part of the ridge.

At one point on the windy ridge it was flat and had a nearly 360 degree view…of fog!

What a shame. There were two spots along the ridge which must provide a spectacular view. But it wasn’t meant to be that day.

This part of the ridge was by far the most dangerous. With the heavy crosswinds, steep rope climbs, and being close to the edge in the fog, I took my time going up.

And finally made it back to the safety of the forest!

As I neared the top, the ground felt hollow in places. There was a good amount of mold on the tree roots that were above ground – which often felt hollow as well. The reason for this–I believe–was soon to come.

A good four and a half hours after I started, I made my final push to the top.

I have to admit that I was pretty darn tired. But there was one bit of good news to me: my feet didn’t hurt.

I had been having problems with my last pair of hiking boots. I made the mistake of buying a wide size instead of a normal width. They were less than half the price than usual and I couldn’t pass them up. I thought if I doubled up on thick socks I would be OK. Well, that wasn’t the case. My feet had been hurting more and more with every hike. I finally broke down and bought a pair of Zambarlan Vioz GTX boots from REI. This was my first purchase from them. They had a deal where members could get a great discount, so I signed up. With the free shipping to Taiwan, they were WAY cheaper than anything I could find locally. Not that it mattered, because it’s hard to find my size here.

Anyway, my feet felt fine and I was happy. But I really needed a rest.

Some pics from the peak.

One interesting thing to see are all these flowers that are blooming on the trees near the top.

After a good rest and plenty of food and water, I packed up and made my way down.

It was after three thirty. I knew I wouldn’t have time to make it to that lower peak, especially after all the…rain that wasn’t rain.

As I hiked down, water was dripping off most of the trees. I thought it was raining, but when I got to an open area, nothing. The open areas were even dry for the most part. It confused me, but after I thought about it I guessed it must be coming from the fog. Somehow the trees were picking up moisture from the fog. Later I learned the term “fog drip” from a friend. Check it out; pretty cool.

Here’s a video I shot of the fog drip.

I assume all that mold and hollow ground are the results of this fog drip. I bet this happens a lot.

With the ground as wet as it was…the fog…the wind…it really slowed me down. But, it did make for some nice shots.

So…you remember those ropes, right? The weather conditions were worse than before. Going up wasn’t so bad, but going down was another story.

It’s hard to tell in the shot below, but the wind was blowing dangerously fast. But all I could think about was the view I was missing. 🙂 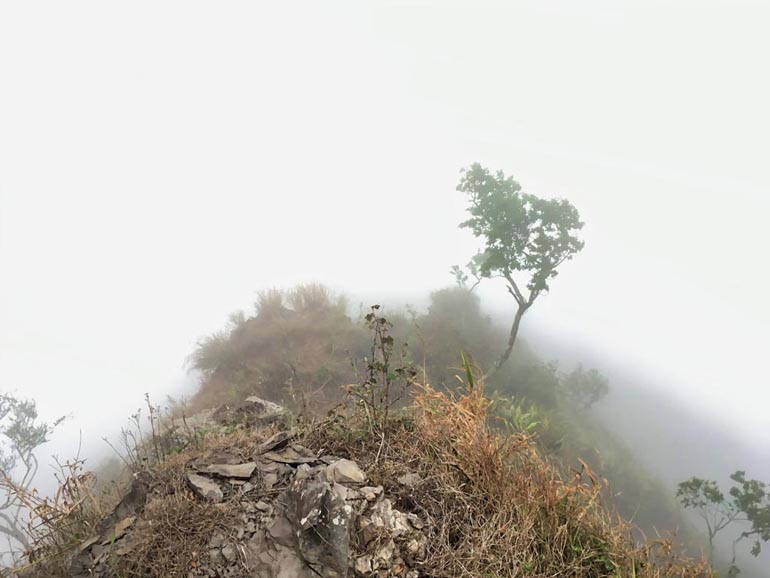 But eventually I made made it down to the forest below…

…and hiked my way back to my bike just as darkness swallowed everything.

I really enjoyed the hike. My only regret is not doing it on a clear day. I plan to go back to at least hike to the exposed ridge and the lower peak. I doubt I’ll go all the way up. There wasn’t really anything to see once I got back into the trees. At least I don’t think so…